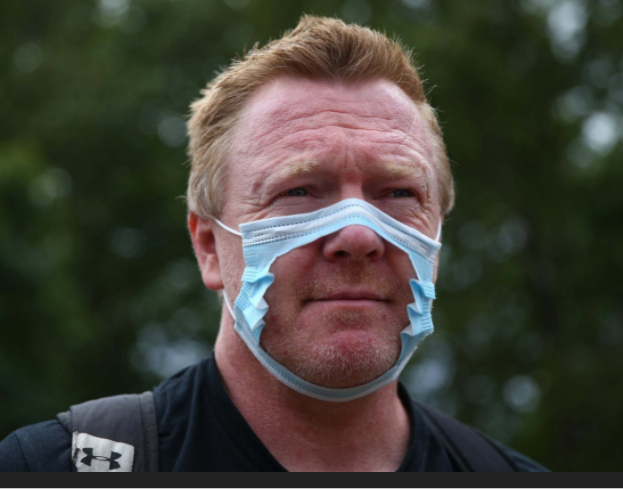 You can’t make this stuff up. You really can’t. Someone sent me a link from an article at “Life Site News” that left me not knowing whether to laugh, cry or both.

MIT researchers infiltrate ‘anti-maskers,’ but find they ‘practice a form of data literacy in spades’

‘Far from ignoring scientific evidence to argue for individual freedom,’ the researchers conceded, ‘anti-maskers often engage deeply with public datasets.’ The scientists went on to smear data-savvy people who question harsh lockdowns or the orders of public health officials, comparing them to January 6 Capitol rioters and warning about too much ‘critical thinking’ undermining trust in government institutions.

A group of scientists from the Massachusetts Institute of Technology (MIT) has released a research paper examining the scientific justification behind groups which challenge the purportedly scientific basis of restrictions introduced on the back of COVID-19, admitting that such groups “value unmediated access to information and privilege personal research and direct reading over ‘expert’ interpretations.”

The paper, published in January and titled “How Coronavirus Skeptics Use Orthodox Data Practices to Promote Unorthodox Science Online,” aimed to show how “activist networks of anti-mask users [a term used to describe lockdown protestors generally] leverage the rhetoric of scientific rigor in order to oppose public health measures like mask mandates or indoor dining bans.”

So as the story goes, a team of five – four academics from MIT and a mathematician from Wellesley College joined some Facebook and Twitter groups and “observed” them and their interactions.

The group reportedly analyzed “close to half a million tweets that use data visualizations to talk about the pandemic,” as well as “over 41,000 images” of graphs and charts used by “anti-mask groups” to demonstrate the myriad statistics from COVID-related studies.

According to the study, the researchers acknowledged “a high level of scientific competency and literacy among critics of non-medical interventions against the Wuhan coronavirus.”

They also seemed a little annoyed by that. Listen to this curious quote from the article.

“Calling for increased media literacy can often backfire: the instruction to ‘question more’ can lead to a weaponization of critical thinking and increased distrust of media and government institutions.”

The authors of the report criticize the skeptics for capitalizing “on the skeptical impulse that the ‘science simply isn’t settled.’

See also  This Has Never Been About Treating Covid. It's Always Been About The Vaccine
Powered by Inline Related Posts

The problem for these people is this causes people to ‘think for themselves,’ and this, apparently, has been leading to disastrous ends – which, I assume, are the ends that people don’t believe the narrative that contradicts the science?

Listen to these tidbits out of the report…

In addition, the study found that “anti-mask groups on Twitter often create polished counter-visualizations that would not be out of place in scientific papers, health department reports, and publications like the Financial Times.”

Counter-visualizations is a term used to describe graphical representations of COVID-related statistics which refute or otherwise challenge the data used by public health officials to justify civil restrictions.

In essence, the research team admitted that skeptical groups have relied on robust datasets in order to challenge the opposing assertions of medical elites, like the radically pro-mask Dr. Anthony Fauci.

The researchers ultimately commended skeptics as acknowledging “the subjectivity of how datasets are constructed” and their subsequent effort “to reconcile the data with lived experience,” thus ruling out F

“[T]hese groups seek to make the process of understanding data as transparent as possible in order to challenge the powers that be.”

AND THAT IS THE PROBLEM FOR THEM.

The study found that both pro-lockdown and anti-lockdown groups utilize public health data to bolster their claims for and against public health mandates, though drawing different conclusions. The researchers noted that lockdown skeptics in particular “are critical about the data sources used to make visualizations in data-driven stories.” This leads more skeptical groups to “engage in lengthy conversation about the limitations of imperfect data,” according to the study.

“These anti-mask activists therefore conclude that unreliable statistics cannot be the basis of policies that actively harm people by isolating them and leaving businesses to collapse en masse,” the authors wrote. Furthermore, “anti-maskers often reveal themselves to be more sophisticated in their understanding of how scientific knowledge is socially constructed than their ideological adversaries, who espouse naive realism about the ‘objective’ truth of public health data.”

Now, this next part would be funnier if it didn’t have such “disastrous implications.

From the article in LifeSite News:

The team compared lockdown skeptics to rioters at the U.S. Capitol building on January 6, an event that they said has “similarly illustrated that well-calibrated, well-funded systems of coordinated disinformation can be particularly dangerous when they are designed to appeal to skeptical people.” The researchers unqualifiedly claim that “the coup relied on a collective effort fanned by people questioning, interacting, and sharing these ideas with other people,” placing any person or group questioning of common assumptions into the category of criminal instigators.

The problem here is that their circular reasoning has turned into a logical circular firing squad. And they just don’t see it.

These people seem to be starting with the assumption that masks are good, and in spite of the data presented to them from the very people they are researching, they conclude the anti-maskers are still dangerous…. because, well, because…. science?

“Anti-maskers often reveal themselves to be more sophisticated in their understanding of how scientific knowledge is socially constructed than their ideological adversaries, who espouse naive realism about the ‘objective’ truth of public health data.”

Catch this gem: “calling for increased media literacy can often backfire: the instruction to ‘question more’ can lead to a weaponization of critical thinking and increased distrust of media and government institutions.”

According to the authors, skeptical groups have capitalized “on the skeptical impulse that the ‘science simply isn’t settled,’ prompting people to simply ‘think for themselves,’” a danger that they say has already led “to horrifying ends.”

The study characterized the skepticism of mainstream media-touted COVID data as “an act of resistance against the stifling influence of central government, big business, and liberal academia.” Such groups, they said, are “highly reflexive about the inherently biased nature of any analysis, and resent what they view as the arrogant self-righteousness of scientific elites.”

“Most fundamentally, the groups we studied believe that science is a process, and not an institution.”

The fact is, most scientists believe that, too.

“For these anti-mask users, their approach to the pandemic is grounded in more scientific rigor, not less.”

So maybe they’ll have to resort to brute force? Seems like their game plan to me.

This Has Never Been About Treating Covid. It's Always Been About The Vaccine
Covid-19 Vaccines and Population Control
Dr. Tenpenny On How The Covid Vaccine Will Kill You
Tags: anti-maskers, California, Canada, Covid-19, Israel, Mainstream Media, Minnesota, MIT, Oregon, Washington