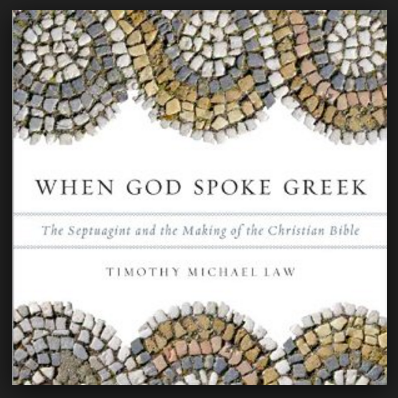 Sacred cows. We all have them. Some of us are more aware of them than others. And presuppositions. Lots of them. I stumbled lately into a reality that I had been milking some of my own when I read, “When God Spoke Greek: The Making Of The Christian Bible.”

Being “schooled” in evangelical/fundamentalist circles for well over 3 decades now, my background as a Christian has always been saturated with clear presuppositions about the word of God as being reliable. I’ve done systematic theology courses at seminary level and interacted with many believers from all walks of life for a long time now. And though my faith has been tested regarding the reliability of God’s word over the decades, time and time again it has consistently proven to be a resting place, a well of fresh living water, as standard by which I am able to measure and gage all other truth.

The subtleties of my understanding of scripture as “God-breathed” have changed.

I have to confess that my understanding of what scripture being “God-breathed” means has been filled out and enriched over the years. Like many things when we first start out learning about them, we have rather simplistic, flat and one-dimensional understandings of ideas and assume the way we hear it taught to us is the way it is.

I used to struggle with things in the bible that caused issues for a “verbal plenary” position on the inspiration of scripture. For those unfamiliar with the term, it means that not only were the concepts inspired in the scripture, but the actual WORDS were God-breathed too. Verbal plenary inspiration promotes the concept that not only is the scripture reliable in everything that it affirms; it is reliable in everything it SAYS in the original documents. So not only can we rely on the fact that Jesus rose from the dead (which the scriptures CLEARLY affirm) but we can also rely on the fact, for instance, we could unravel the different resurrection narratives and get a very clear and plain time line of who showed up at the tomb when and all that goes with it. The position of inspiration doesn’t think those details are such a big deal if they disagree on minor points; the position of verbal plenary inspiration says they are important, they can be proven, and if they can’t be proven, then the whole thing falls down like a house of cards.

And so, when I first accepted the idea of verbal plenary inspiration because it was what I was taught, I never even looked long and hard at “inconsistencies” because I wasn’t even aware there were those in the non-believing community who saw there were any. But there were some I would come across on my own, and they would trouble me.

Those pesky little “problems” in the bible

There is the parable of the demoniac (or demoniacs) at the tombs, out of whom Jesus cast demons into the swine and they ran over the cliff. Was there one demoniac or two? Sure. You can jump through some mental hoops and reconcile this apparent discrepency in a way that leaves a doctrine of verbal plenary inspiration intact. But it is not a natural fit.

I’ve since come to terms with some of these issues, and though I’ve moved away from a doctrine of verbal plenary inspiration, I’ve come to an understanding of inspiration that is both enriching and freeing – a concept that understands the reality that the scriptures are inspired in all they AFFIRM – without having to hold to a rigid position that has to justify every word of every passage as inerrent in order for the scripture to be totally reliable regarding all matters of faith and doctrine. God can be trusted to be bigger than a mechanical box to guarantee everything has to be perfectly accurate to be “perfect.”

When I started reading Timothy Michael Law‘s book, When God Spoke Greek: The Septuagint and the Making of the Christian Bible

, it opened my eyes to a refreshing world of understanding of what exactly it is I hold in my hands when I open a bible and read from the reliable and God-breathed pages that I find there. But I have to honestly admit that, though I had studied the bible for years and had taken systematic theology courses studying the contents of the bible, I had never before grappled with the realities of the different manuscript families that are the basis of our bible. I had never understood how the early church understood “inspiration,” or how the early church comfortably had different manuscripts in the same collection that had minor differences between them but the early believers never batted an eyelid over it. I had never understood how the early church considered as “normal” reading and as reliable reference texts so much of what we in the 21st century run away from as “non-canonical.”

We have a very clean, safe and sterile understanding of how our bibles came to us. But it is not a realistic one. And because of this, we miss out on so much understanding of what this bible really is that we hold in our hands.

One of the things I really enjoy about the book, “When God Spoke Greek” is that you can read through the book quite comfortably without feeling like the author has an axe to grind, or that he has any particular motive for writing. All too often, the modern scholarship in Christian literature wants to try to look at everything through a lens that says miracles cannot be considered, resurrections do not happen and so we must come up with a different explanation for what REALLY occurred at the empty tomb, etc., etc..

There is no such bull to gore in ths book – at least not as far as I saw. It is more an honest telling of what is in the different manuscript families, how the believers back in that time handled them and what we can take away as far as the story of what we hold in our hand.

Now, if you feel threatened that if someone were to rock your boat about verbal plenary inspiration, it might upset your faith, then I would say you might want to think carefully about reading this book. But then again, if verbal plenary inspiration is true, and you want to be able to defend that position intelligently, then reading this book might be a healthy exercise. It will ask honest questions of you just by reading it – not by spefically challenging your postion with questions, but simply by presenting some facts from history that really will ask some honest questions.

“Law overturns the assumptions of most Christians about their sacred scripture. He points out that the Greek text of the Septuagint was the early Church’s Bible, that it predates the Hebrew Scripture now commonly accepted, and that it presents plural traditions of ancient Hebrew biblical texts, many now lost to us. Fundamentalists will find these unpalatable truths; others will find that Law points to new delights in their reading of scripture.”

In the end, truth is what matters.

It matters, no matter the cost or the conclusion. And this book does not threaten the idea that the bible you hold in your hands is the word of God. But what it DOES do is challenge your preconceptions about what that really MEANS, and how we come to have it, and what it shows us about the faithfulness of God.

In the end, this book should not only make you more comfortable with the bible being God’s word. It should also leave you a little more flexible to see that God is able to speak in many rich ways, and to be open to understandings of how some of those other contemporary writings from the first century shouldn’t scare you or scar you. We give this book 5 out of 5 stars as a light-reading, educational text. Highly recommended as must reading for appreciating what inspiration means, and being able to discuss it intelligently with non-believers who think the bible cannot be trusted.