The Pope, The Qu’ran And A Call For Responsible Blogging 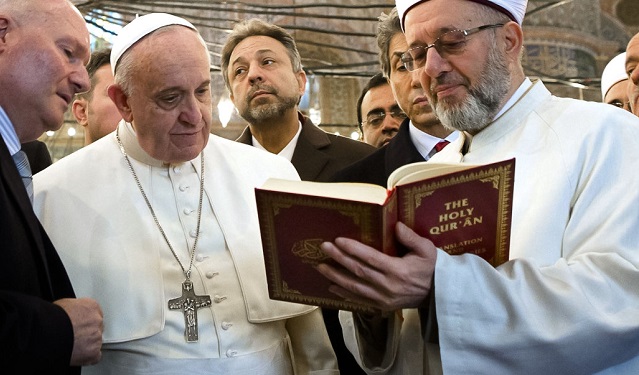 Depending on who you follow on FaceBook and depending on who your friends are, you can wake up in the morning and get overwhelmed and depressed for the entire day just reading through the first five minutes of your feed.

There was an article in a news feed not too long ago that read, “Pope Francis To Followers: ‘Koran And Holy Bible Are The Same.‘ I checked recently and that article is gone. (That’s a good thing. It was a questionable web site and a bad article.)

The Pope is questionable in a lot of people’s minds. According to the Malachi prophecy (a vision of 112 popes from the 11th century) this pope is the last one, and, according to some, the one who will usher in the anti-christ. You can, for instance, see this take on things on Sid Roth’s TV show, ‘It’s Supernatural.’

Click THIS LINK for the episode on Sid Roth’s show.

With this much negative attention from evangelicals about this pope, and with the convergence of events watched by many evangelicals such as the blood moons and the shemitta, it’s easy to see that, for many of them, this pope COULD look like the beginning of the end.

The typical evangelical Christian is kind of ‘predisposed’ to EXPECTING this sort of thing from the pope.

The antichrist is supposed to get all the followers of different religions to buy into a one-world religious system of sorts. So if the pope were to make a statement like this, it wouldn’t seem like that much of a stretch for many.

As I said, this site seems to be gone now. But there wasn’t much on the WashingtonPost.com.co website that indicated who they were.

It LOOKED like a news site. The little news ticker at the top of the page was well-presented; it cycled through news stories of the day; and when you got a quick glimpse of the address in the address bar, your eye picked up on “`washingtonpost.com”`and you miss the little “.co” tacked on the end; or else, you just might have assumed it is an extension of some sort. My bet is that is exactly what they were hoping.

A little disingenuous? I can’t say for sure….

I don’t want to rush to judgement on people’s motives here. But it seems like the motive sure was to create an impression that many people might well take for the real Washington Post web site.

Their site had links to interesting stuff. But it is the quality of reporting that concerns me: sites like this are not accountable for journalistic excellence the way a professional news organization is accountable, and it seemed to be lacking. I’ve seen a lot of these sites and they seem to suffer from a common malady.

By the way: just because a newspaper IS a major media outlet, it doesn’t mean they always get it right, either. For instance, there was quite a “hit piece” by an exuberant reporter at the Toronto Star, put on a conservative investigative reporter named Ezra Levant recently written. You can read the Star’s response when they were caught in an embarrassing situation.

Some blogs are written because people have a burning passion to disseminate truth to an audience that wants to hear it. And there are some who start and maintain blogs because blogging, when done well, can generate an income stream. There’s nothing wrong with that, necessarily. Even Sean Hannity and Rush Limbaugh started somewhere.

Anyway, from the washintonpost.com.CO article, we read this:

During his hour-long speech, a smiling Pope Francis was quoted telling the Vatican’s guests that the Koran, and the spiritual teachings contained therein, are just as valid as the Holy Bible.

“Jesus Christ, Mohammed, Jehovah, Allah. These are all names employed to describe an entity that is distinctly the same across the world. For centuries, blood has been needlessly shed because of the desire to segregate our faiths. This, however, should be the very concept which unites us as people, as nations, and as a world bound by faith. Together, we can bring about an unprecedented age of peace, all we need to achieve such a state is respect each others beliefs, for we are all children of God regardless of the name we choose to address him by. We can accomplish miraculous things in the world by merging our faiths, and the time for such a movement is now. No longer shall we slaughter our neighbors over differences in reference to their God.”

But, after doing some more research, our conclusions are similar to these (from a web site formerly called “thatsfake”:

Rumours that the Pope recently announced to his followers that the Holy Bible is the same as the Koran are circulating across social media. The rumours link back to an article on National Report that claims the Pope stated that Jesus Christ, Jehovah and Allah are different names to describe the same entity

However the rumours are false. There have been no mainstream media reports that claim the Pope likened the Bible and the Koran. It is true that in late 2014 the Pope was misquoted claiming that the Koran was a “prophetic book of peace” when he actually said this is how Muslims themselves describe their holy book.

The quotes and events in the National Report article appear to have been entirely fictionalised, with no other reputable reports claiming this to be true. Other low quality fake newswebsites, including a fake Washington Post website, have since republished the story.

Note: The “national report” website has since pulled the article. Good thing.

After more digging and cross-referencing, it appears that Pope Francis was essentially saying to them, ‘since you SAY that your muslim religion is a religion of peace, then let us work toward an end of living what we all claim to believe.’ He never said their Gods are the same; he never said the bible and the Qu’ran are equally the word of God. He said both Christians and Muslims claim to have roots in faith in a supreme God, and in living peacefully among men. He never said they are the same.

By the way, the disclaimer on the National Report said:

National Report is a news and political satire web publication, which may or may not use real names, often in semi-real or mostly fictitious ways. All news articles contained within National Report are fiction, and presumably fake news. Any resemblance to the truth is purely coincidental.

The story is badly reported. But a lot of conservative-leaning people read their stuff, repost it on the internet; and then a lot of OTHER people read it and re-post; and the skewed stories go round and round and round. Spewing stuff out for sensationalism, and conveniently covering it with a cheesy disclaimer that “any resemblance to the truth is purely coincidental” is ridiculous.

This website is in no way affiliated with http://washingtonpost.com.  All content contained within has been reposted with the express written consent of the copyright holder.  If you are interested in acquiring this domain, please visit the ‘Purchase this Domain’ link.

I’m not sure of their motives. It feels like they’re trying to give an impression that they’re something they’re not. I just don’t know. What seems more certain is that they’re not so concerned about literary and journalistic excellence as they should be for the amount of influence they have, and for the number of people who will read this with an expectation that it’s true. It is presented like news; it needs to be researched and fact-checked in the same way. In this sense, we ARE our brother’s keeper.

If a blog is JUST about creating content to monetize for an income stream, then it’s easy enough to do. You don’t need to do a lot of hard work. And it doesn’t take a lot to convince people that what you’re saying is true. You quote some sources, you speak with authority and consistency and people believe you. But then again, they believed Bill Clinton, too. But the results can be so unfair and destructive to the body of Christ. Look, for instance, at what they do to Rick Warren, and how they seem to badly mangle what he is really trying to say. As Rick Warren says, it’s easier to demonize. It’s easier to be extreme: you only get one group mad at you instead of when you try to walk the middle, and get hit from both sides.

And this is a word of caution for any reader in the blogosphere. In the multitude of counselors there is wisdom. BE CAUTIOUS. Blogs that report events in a ‘news fashion’ owe it to their readers to do good research. But they don’t. At least, not all of them do.

Getting opinions from people by reading their blogs is fine. We are all curious about what other people think. But take everything that is presented as fact with a grain of salt. Do your homework. Check multiple sources. ALWAYS see what the other side has to say. Sites like thatsfake.com and snopes.com might not always be right, either. But they try; they show a healthy skepticism; and they give you things to think about (if you really WANT to think about it) from a different perspective.

Jesus said, ‘the truth will make you free.’ That applies, no matter WHAT the subject matter.

I intend to start an archive of sorts, rating ‘news’ sources as I come across them, to keep people informed of what my findings are regarding who is reliable, who doesn’t seem to care, who seems to explore the issues, who is writing satire, and who may or may not be writing satire but just don’t seem to bother telling you.

I’d love to have you subscribe to my email list, so I can keep you informed of updates on these kinds of things from time to time. Check back soon. I’m still working on it.

Congressman Jim Jordan (R-OH) told the January 6 panel to pound sand after they asked him to provide information about his communications with Trump about the Jan. 6 Capitol protest. Rep. Jordan formally responded to the January 6 panel in a letter to the committee’s chairman, Rep. Bennie Thompson. “This request is far outside the […]
The post Rep. Jim Jordan Tells Jan. 6 Panel to Pound Sound, Rejects Legitimacy of Investigation appeared first on NOQ Report – Conservative Christian News, Opinions, and Quotes.