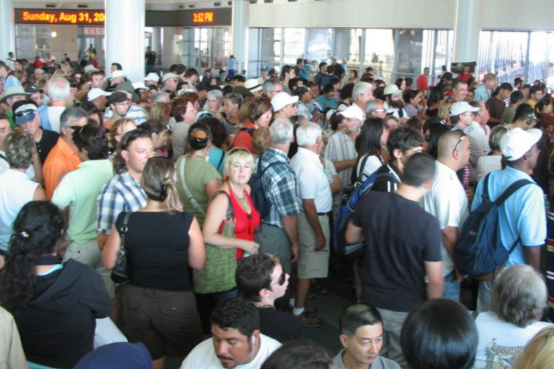 She wasn’t hurting anyone. But if the truth be known, she was annoying a lot of people. It reminded me how sometimes we have no idea how our behaviors are actually hindering the gospel as we try to preach it to others.

We were at the Staten Island Ferry terminal, waiting for the boat to cross to Lower Manhattan, along with hundreds of others. There was this old woman, sitting in the middle of the crowded room. She was reading her bible. And singing. She was really singing.

It wasn’t an operatic voice or anything; in fact, she was a little out of tune. And LOUD. She was preaching-singing. She appeared to care little about what anyone around her seemed to think about her singing, too. It was like she was in her own little world.

On the one hand, she was “preaching the gospel.” The words she was singing were straight out of the bible. And the bible does say that God’s word will not return to Him void.

But there is a passage in Acts, chapter 16, where a woman was speaking a constant and steady message about Paul and Luke, saying  “These men are servants of the Most High God, who proclaim to you the way of salvation.” But even though what she was saying was absolutely true, it is clear from the passage that she was not of the right spirit when she was doing it….

As we were going to the place of prayer, we were met by a slave girl who had a spirit of divination and brought her owners much gain by fortune-telling. She followed Paul and us, crying out, “These men are servants of the Most High God, who proclaim to you the way of salvation.” And this she kept doing for many days. Paul, having become greatly annoyed, turned and said to the spirit, “I command you in the name of Jesus Christ to come out of her.” And it came out that very hour. (Acts 16:16-19)

This woman in Acts, although she was proclaiming the truth, was actually driven by a demon to say what she was saying. It seems Paul did not find the timing of her message or the way she was delivering it to be at all helpful. Her message was perfectly true and accurate; but apparently the devil was behind the message.

Our proclaiming the gospel must be led by the Spirit of God, in His timing. And we must be of the right spirit when we declare it, too. The apostle Paul said, “If I speak in the tongues of men and of angels, but have not love, I am a noisy gong or a clanging cymbal.” (1 Cor 13:1)

But we are required to always be sensitive to the Spirit and led by Him so that we don’t add our own offense to the gospel. Otherwise, we might be undermining the very God we believe we serve.