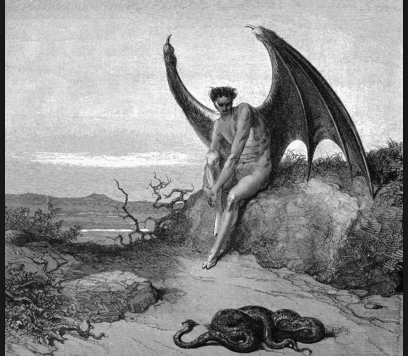 The Devil Wants You Dead. And God does, too. They just want it for different reasons.

God wants you dead, too. He wants to crucify your old man so he can bring out of  you a reflection of the saviour, allowing you to walk into what His desire is for you. It’s what His desire really has been for all of humankind, even since before the fall – that we would walk with Him, and Him with us, able to enjoy each other’s company.

We Need To See Ourselves As God Sees Us

God is desperately looking for friends with whom he can share his heart. He wants to spend time with us. That self-will you hold on to – all that stuff where you don’t really believe Him when He says, “do this,” or “don’t do that,” is killing you, a little at a time. And the guilt, shame and self-loathing it causes you creates a barrier between you and God.

The devil loves that stuff. But God wants to crucify that sin nature and that self-will so we can enjoy spending our time with him. He wants to free us from guilt about the past, anxiety about the future, and feelings of inadequacy. But to get there, you have to “die.”

You think you’ve messed up? Maybe you have. Maybe you have really messed up. But do you realize that not one, but two people denied Christ? As Kris Vallotton says, one hung himself; the other ended up being the head of the church.

The point is that there are many people in the bible who had failures in their lives. But those failures don’t have to define you; they don’t have to mark the limits of who you can become in Christ. King David had great moral failures in his life, but David was known as a man after God’s own heart.

The devil has a clever way of messing us up and keeping us locked in patterns of self destruction. It’s one of the ways he tries to kill us. When you’re struggling with your choices, and you’re wrestling with a temptation, he tells you before you do it that it’s not that big a deal. But after you’ve given into it, he uses the guilt to shame you into thinking you’ll never change. When you’ve fallen, you feel guilty. You make plans to do better. But when you fall into the same patterns, you convince yourself you can never change. Or you measure your “success” by how well you’ve done since the last time you fell. Until you fail again. Wash, rinse, repeat.

Don’t focus on that. That’s from the devil and he’s just trying to kill you. Focus on Jesus.

There is a part of us that wants to offer our own sacrifices to atone for our own sins. We can get into a trap where we believe that if we can just demonstrate that we’ve done enough “obedience” to outweigh our disobedience, then we can take ourselves seriously and somehow believe were are then worthy of the grace of God.

But that is a subtle form of pride. And that’s from the devil, and he’s just trying to kill you.

Peter’s remorse ran deep. For three days and nights after he denied Jesus, he had to live with who he really was. Jesus told him who he was. Peter thought that even if everyone else denied Jesus, he would stand firm. But Jesus told him he was very weak and that he would not be nearly as strong as he thought he was. We have to see who we really are. But we can’t stay there; that is only part of the story. Peter also had a promise from Jesus, in that Jesus told Peter He prayed for him:

“Simon, Simon, Satan has asked to sift each of you like wheat. But I have pleaded in prayer for you, Simon, that your faith should not fail. So when you have repented and turned to me again, strengthen your brothers.”(Luke 22:31-32)

Your bad decisions are either stumbling blocks or stepping stones

The difference has to do with pride; if you insist on seeing yourself as good enough, you will see a failure as “uncharacteristic” of you; it is a subtle trap from the devil, where he entices you to keep “trying” until you can see that you get it right. Your ratio of success and failure becomes the whole measure you use to determine your worth before God. But it’s still about you.

And focusing on YOU all the time is a trap of the devil. And the devil wants to kill you. Focus on Jesus.

But this is the trick

The trick of the devil is that whether you spend time being proud of how Christlike you are, or spend time being humiliated by how sinful you are, you’re still spending your time focusing on you. Constantly beating yourself up about how you’ve failed again and that you’ll never change is a subtle form of pride (if you can hear that). Because it’s still about looking at you.

Just look at Jesus. Focus on Jesus. God wants you to learn to enjoy spending time with Jesus, focusing on his faithfulness, his love for you, his sufficiency for you. And as you spend time with Jesus, in prayer, in meditating in the word of God, He changes you. Jesus said, “if you remain in me and my words remain in you, you can ask for anything you wish and it will be granted” (John 15:7).

Now the Lord is the Spirit, and where the Spirit of the Lord is, there is freedom. And we all, with unveiled face, beholding the glory of the Lord, are being transformed into the same image from one degree of glory to another. For this comes from the Lord who is the Spirit. (2 Cor. 3:18)

It’s that as we spend time with him, we just naturally become like him. And as we spend time with him, becoming like him, the things He wants become the things we want. And then it becomes the Father’s good pleasure to give us His kingdom (Luke 12:32), because you and God want the same things. And His greatest desire for you is that you fulfill your primary destiny of being conformed to the image of Jesus. As you spend time with him, you enter into an awareness of having been crucified with Christ and raised again from the dead. And you fall in love with that condition. And then, as you do, you bear the fruit that will last.

Agree with God – quickly – that you must die.

If you agree with God that your old man needs to die so that the life of Jesus can transform you into a new creation, then you’re in the safest place you can be. It is there that you learn to live as a dead man, brought back from the dead.

And the devil can’t hurt you when you walk in that. And, pardon the pun… but that just kills him.

We Have Been Comfortable For So Long
My Problem With The International Day Of Prayer
It's not always what it looks like
Tags: Be still and know, dying to self, identity, Imperfect Christians, peace with God, prayer