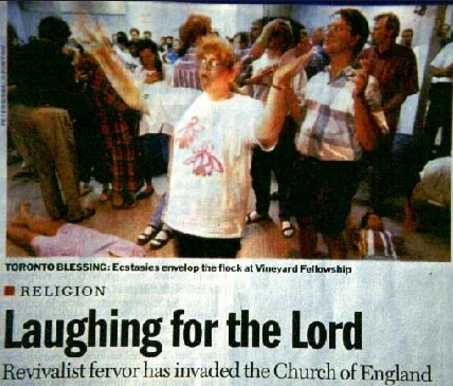 I remember, back in 1994, hearing a bit of a hullaballoo about the “Toronto Blessing” (a revival that is purported to have broken out at the Toronto Airport Vineyard Church in 1994, now known as “Catch The Fire“). It is one of those stories that, depending on your persuasion, leaves you with some very positive or very negative feelings about what was going on there at the time. For those of a charismatic leaning, it was really something. For those who lean more toward the baptistic side of the fence, it was really something else. But like I said, it’s not always what it looks like.

For better or worse, the “Toronto Blessing” has left a lasting impact on the church

Like it or not, it really made a mark on the church, and has continued to do so for the last 20 years or so, and whether or not it has had a net positive effect is something that many people have opinions about. I have my own opinion. And I have to position myself here, probably warming some of your hearts in the process and alienating others at the same time. But we all have to stand (or fall) before God based on what we know, and what we do with what we know, and so I write the following, knowing that people will all process it differently.

The reason I want to put this out there is because I know that, at the time, I had some very negative emotions about what I was hearing; having changed my views over the last 20 years or so, and having now heard some inside bits and pieces to some of the stories, I thought it might be good to share what is, by some means, a story to which I have some inside info, and hopefully sharing it will move some people in a direction of being open to what God might be doing in situations, even when we don’t see all of what He is doing. But rest assured, my end goal is in mind as I write. I hope you will come along for story time and we can arrive at a good place by the end. So, here goes.

See also  HOW WILL THE EQUALITY ACT (HR5) IMPACT YOU AND YOUR FAMILY?
Powered by Inline Related Posts

Opinions differed greatly about whether this was God or the devil.

I have visited the “Catch The Fire” fellowship in Toronto now, probably a half dozen times, and have attended a five-day conference there in the past. But I did not always see the place in the same light that I do now. 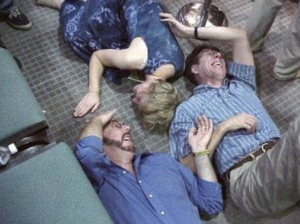 Back in 1994, when I first heard of what was going on there, it was while I was attending a baptist church, having read and pretty much bought into what was in John MacArthur’s book, “The Charismatics: a doctrinal perspective.” I was, at the time, pretty much convinced that the Charismatic churches were very much driven by emotion, and very light on doctrinal strength. And so, when I friend called and left me a voice message at the time, telling me there was a “massive revival sweeping the Toronto Airport Vineyard church, and that it was heading our way,” I was a tad skeptical. I figured if a revival was coming, and it was really revival, the fruit would soon be on its way and I would see it when it got to my town.

How I wish now that I had made a trip or two to Toronto at the time.

What bothered me at the time was the news that seemed to make the TV and radio about it at the time – people crawling on their hands and knees; people barking like dogs and roaring like lions; gold fillings appearing in people’s mouths. I had already been to some healing meetings in some major US cities and had been present as people would parade across the stage, speaking into the microphone at healing meetings as they proclaimed what God had done for them.

Being curious, and considering myself open-minded at the time, but wanting to see confirmation about whether or not what these people were saying was true, I actually approached the stage at one of these meetings to get a better feel for what was really going on. And I wanted to get up close and personal. So I picked one person as a test case. I wanted to witness first hand what I was told was happening.

I looked at her supposedly “straight” teeth. It was hard to share her enthusiasm.

I was looking at the proverbial picket fence in her mouth. They did not look straight to me. Not at all. I was disappointed. I wanted to see straight teeth. I really did. But they were not to be seen. At least not in this mouth.

I’ve heard of the stories of gold teeth appearing in people’s mouths. And they’ve done some investigating at places like Toronto (I say good for them) only to find that there were a lot of these people thinking God had given them gold fillings only to find out, when returning to their dentist’s office that the dentist had to tell them that he himself had installed those fillings, those crowns.

But not all of them. Not all. Some were, apparently, unexplainable by the dentist. The dentists suggested maybe they drank some funny orange juice or something…..

Anyway, back to the roaring and barking.

Because sometimes, you have to hear the rest of the story.

A couple of years ago, I heard testimony from a man who says he was at the Toronto Airport Vineyard back then, and he was the guy who was reported about in the paper who roared like a lion. He is a personal friend of someone I know intimately in ministry, and someone I trust very much to be of good character and not given to unnecessary emotionalism or hype. He spoke at a morning meeting, telling them that HE was the one who roared like a lion. He says God spoke to him in that moment to do it; he felt foolish doing so, but was just doing what he very distinctly thought God was telling him to do. I can appreciate obedience to what you believe God is telling you to do. Others have done it. God told Abraham to lay his son on a pile of wood and offer him as a burnt offering. He told Hosea to marry a prostitute. He made Isaiah walk around half-naked for three years prophesying against Israel. So if a guy believes God is telling him to do something, he is maybe not in bad company.

Anyway, I had occasion to speak with one of the ministers at the Toronto Vineyard about a year and a half ago, and asked him about this person (mentioning him by name). He replied, “why, YES. That was NUTS. We just didn’t know what to do with it at the time. We were all just coming out of the baptist church at the time, and we didn’t know WHAT to do with the guy. And then, we asked him his story, and he said he was a pastor! And we thought ‘a PASTOR? WHAT the heck are we getting into here?!?!”

Here, from this man’s website, is his personal testimony about the event.

New members flowed in to Zion as the Father’s heart poured out in what is known as the Toronto Blessing, bringing refreshment to many. At the October 1, 1994 “Why Encounter” event, which joined key cities across Canada through a satellite network, Pastor Gideon, was invited to pray for China. The Lion of Judah “roared” through him against the dragon of China, and by God’s design, this day coincided with the day known as China’s National Day. Months earlier, when God touched Pastor Gideon so deeply in Toronto and he began to roar, what he witnessed in the spirit was Almighty God making a decree to Satan, saying, “Let My people go.” He knew then that many things in God’s divine plan were about to unfold.

So now, as Paul Harvey would say, here is the rest of the story.

I had previously published this blog as a post on another site. When I first published it, I thought this person should remain nameless, because I didn’t feel I had the liberty to broadcast who he is because of the nature of his ministry. He has been very influential in ministry to the Chinese church. But then again, he has a web site where I do believe he discusses this anyway. So I will say that the man’s name is Gideon Chiu.

And lest you think he is just some Joe off the street who might not have it all together, you will see on his web site that among his list of credentials is:

And he was ordained, after having obtained these degrees, about a decade before God told him to roar like a lion. 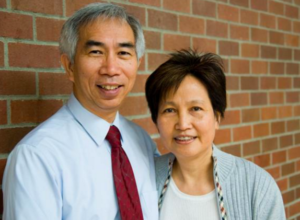 Since then, has been instrumental in establishing a world-changing outreach to China. Gideon is involved in mobilizing MANY (I won’t mention numbers, but it’s HUGE) to go into the middle east to evangelize Muslims and to lead them to Jesus.

This man says that the moment of his roaring like a lion was instrumental in this ministry opening up for him.

He would tell you, if he knew you could hear it with an open mind, that in that moment, he saw in the Spirit that God was making a decree to the devil, saying to the devil, “let my people go.” He knew that God broke something loose for him in the spirit realm in that moment and opening a vast area of ministry.

God has been using this man in his ministry to China and to the Chinese church, and he, with all his education and experience, attributes some of what is happening to a moment in time, when he obeyed what he believed was a leading of the Spirit to do something that, to many people looking on, and not knowing what was happening between him and God in the moment, simply wrote it off to silliness and emotionalism.

Sometimes, you can’t always tell in the moment what is of God and what is not.

Sometimes, you can only fully see the reality of it with the ultimate ripening of the fruit. But sometimes, that’s just the way God works. And if you believe God is telling you to do something, you just need to step out in faith and do it. And if you missed it, God is big enough to handle it for the both of you. But you’ll probably be surprised that it really was Him all along.

PS: for another similar story, I stumbled upon this one when I was doing some research for the article. You can make your own judgements about it, but it is interesting to see how God works. This was another fascinating story that sounded much the same.

Why Do I Not Hear God
My Problem With The International Day Of Prayer
The Devil Wants You Dead
Tags: Canada, Catch The Fire, Israel, Revival, Roaring like a lion, Toronto Airport Vineyard, Toronto Blessing