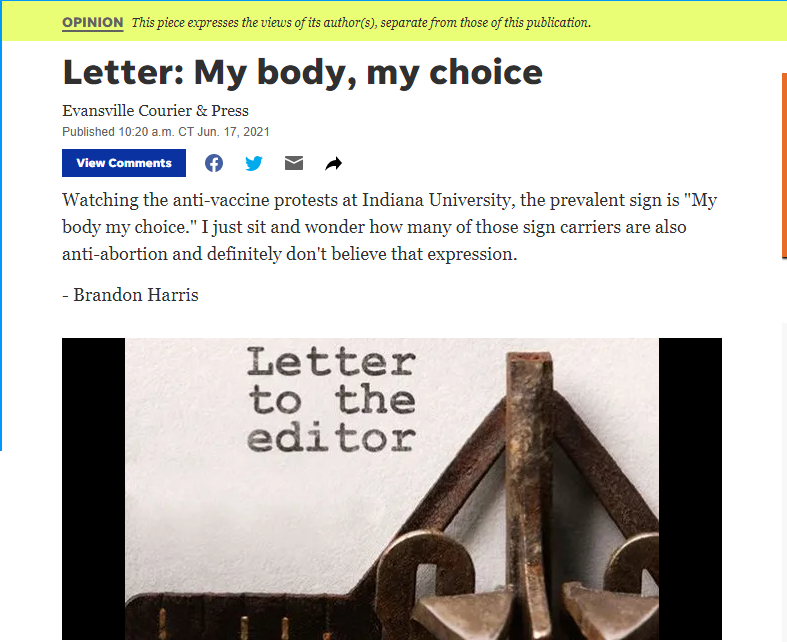 An open letter to Brandon Harris regarding your letter to the editor of the Evansville Courier and Press.

Maybe it’s too much to expect the pro-choice, pro-vaccine crowd to see the irony in their stance.

You don’t know me. I’m sure we will never cross paths. But I am struck by the irony in your view of the irony from the other side of the street. You wrote a letter to the editor of the Evansville Courier and you said,

Watching the anti-vaccine protests at Indiana University, the prevalent sign is “My body my choice.” I just sit and wonder how many of those sign carriers are also anti-abortion and definitely don’t believe that expression.

I’m not picking on you, personally. Rather, I’m speaking to everyone you’ve represented by your letter to the editor – those of you who think a woman should be able to choose to terminate her pregnancy, but anti-vaxxers should not be able to choose to avoid the vaccine.

It’s called irony, Brandon. The pro-life, anti-vaxx side sees the irony in the stance people on your side take on these two issues. They’re jamming it back at you. And you don’t even see it.

The pro-life, anti-vax (PL-AV) side sees it glaring them in the face.

I can’t begin to tell you the number of times I’ve had people from my side of the discussion say to me, “so where are all the pro-choice people now with the ‘my body, my choice’ rhetoric when it comes to vaccines? Why can’t the see how ironic this is?”

I’ve had this discussion with pro-choice people who are anti-gun, anti-capital punishment, anti-seal hunting. Their response is always the same: “My body, my choice.”

It’s like hitting a wall of “non-think” when talking to people who think abortion is a valid choice for a woman with an unwanted pregnancy.

“So you think it’s wrong to hunt a baby seal. They’re so defenseless. But it’s ok to kill a baby in the womb?”

Except it isn’t the woman’s body anymore. It might not be her fault the baby is in there (although, let’s face it, it sometimes is). But whether it’s her fault or not, It’s still her problem.

But it’s also a problem for the baby. It seems pretty intuitive that the baby probably wants to live.

A woman’s right to “choose” means she is making a choice for both herself and that unborn baby who will never see the light of day while alive.

“So you’re against capital punishment? That serial murderer or serial rapist has a right to live and society doesn’t have the right to take their life, huh?”

“But a woman is killing a baby when she aborts it. She is taking an innocent human life.”

It’s hard to try to have a logical argument with people who don’t really want to determine what is right or wrong, but merely want to rearrange their prejudices so they don’t have to change their choices.

You’re missing the whole point, Brandon. I will bet against you a gazillion dollars that those people DO believe it is their body, their choice.

The difference is that when it comes to abortion, they don’t believe that is the woman’s body at all. They believe the woman’s body stops where the baby’s body starts. And her inconvenience, no matter how difficult, is no justification for killing an innocent life.

The irony. You just don’t see it.

We clash on worldview. The difference is our side sees your worldview and knows why we think it exists based on wrong premises.

Your side so often doesn’t even recognize this is a worldview, or what that means.

So let me explain it to you, Brandon, or at least try to explain it. Your worldview is your overall, sort of streamlined “alignment of the facts” approach to the world around you – your perceptions of why you are here, what the purpose of life is, if there is a heaven and hell after this life, and which one you’re probably going to end up in when you go.

Everybody has a worldview. Just not everybody has thought about why they believe what they believe about the world. In fact, some people avoid thinking about it because of what it might require them to do differently, were they ever to come to different conclusions about things.

So let me break this down for you, as I see it, from my side, and let’s see if I can help you (or others, on “your side” of this issue) understand the irony we feel as we, in desparation, try to throw your side’s slogan back at you in a desperate attempt to get your attention.

From my side, it looks this simple.

I think the vaccines are more harmful for people these days than the chance of contracting covid is. I’m not one of those who think Covid is “just a flu bug” or “was never really a thing.” That is a laughable position and people who hold that argument on “my side” are an embarrassment. They just are.

Can I just be honest here, Brandon, about what the difference is here between you and me?

Look. I’m not going to judge you. I don’t even know this is exactly how you feel. But it’s how I feel about how your side comes across.

Here goes. No offence intended. But I’m sure some will be offended. Yet, I have to say it anyway.

Seems to me, plain and simple, that is the real issue. A woman’s right to choose abortion doesn’t negatively affect you. My choosing to not vaccinate might affect you personally. That is really the only thing that is different here.

At least, that is the way I see it. Convince me I’m wrong.

Look. Brandon, whether you can see it or not, my side thinks these vaccines are endangering ALL OF US. We are protesting it because even if your side drank the kool-aid, our side wants the chance to not have to drink it alongside you.

But if we could, we would like to get you to see the kool-aid for what it is, so you don’t drink it either.

We want you to have the right to choose, too. But we wish there wasn’t such an orchestrated effort on the part of mainstream media and big tech to squelch all the voices on the minority side of this issue. There are real doctors out there – real research scientists and immunologists – who think this stuff is going to harm a lot of people.

People on my side want you to be able to choose, too. But without half the information hidden from you. We are fighting for your rights and your health, whether or not you understand it.

Brandon, I’d just love to ask you a question here, in conclusion: if you thought that my not getting vaccinated wouldn’t be a threat to your health, would you really care if I got it or not?

If you knew it would only increase my chances of getting Covid but not yours, would you be at all concerned whether or not I got the vaccine?

And if you can’t see the difference and the frustration that causes my side to try in desperation to use your side’s slogans against you, then we are going to have to keep trying to fight this battle for us and for you, too, in spite of your best efforts to stop it. Because this isn’t just about me. It’s about you too, whether you see it or not.

Check Your Mental Health – An Open Letter To Jeffrey Guterman
Why THIS Trump Supporter Is NOT a Racist, Homophobic Bigot
An Open Letter To Donald Trump From A Reluctant Fan
Tags: Covid Vaccine, Forced vaccinations, Mainstream Media, My body