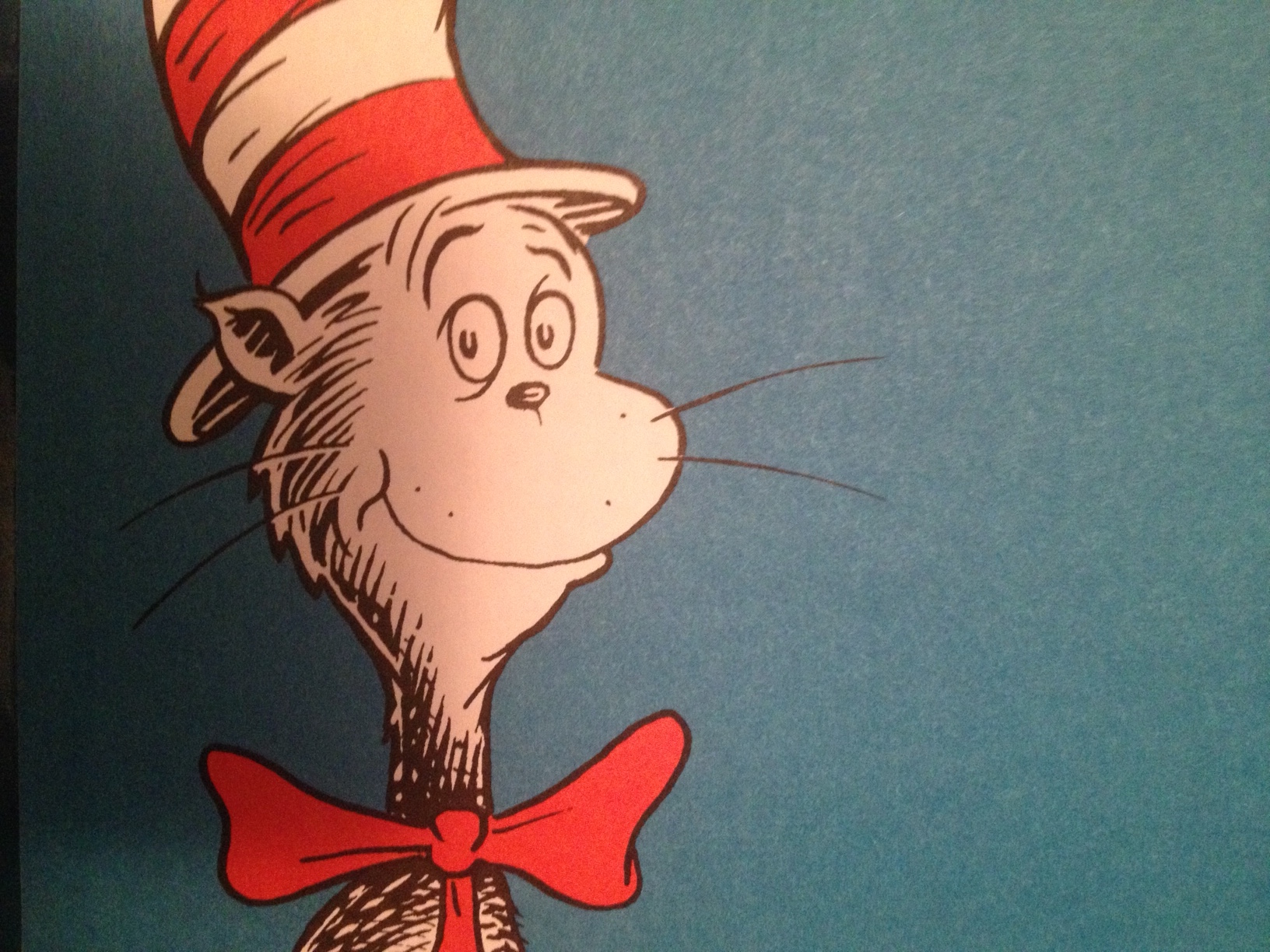 I get the most interesting texts from my boys sometimes. They all live on their own now; some close by, some pretty far away. But whether near or far, we all try keep in touch.

They know I have my phone on all the time – in fact, they know I have my phone on just so that if they ever need to get hold of me, they know I will be available. I always want to be there for them; I want them to know I’m available, too. There are times they’ve needed to talk and I am so glad I’ve done this over the years. Even when it’s been 2:00 in the morning. So it’s not unusual to get text messages from them. Sometimes saying hello, sometimes asking for advice. But I’m always glad I’ve left the phone on. 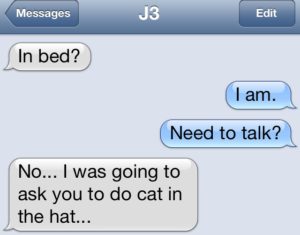 You have to know our family history with Dr. Suess.

You see, when my boys were little, I used to love to read them Dr Suess books like “The Lorax,” or “Green Eggs And Ham.” And they used to love the way daddy would read them. I loved it too. We made those books fun and something to look forward to.

I read those books to those kids so often that I had them pretty much memorized; especially, “The Cat In The Hat.” And over the years, it’s become a bit of a conversation piece in our family – especially when we gather at Christmas or when I meet any of the boys’ friends or girlfriends for the first time. The boys will often comment that I have it memorized – ALL OF IT – memorized.

And then I’m called on to perform. And I do.

But this one son of mine will sometimes call me out of the blue to ask me to recite “The Cat In The Hat” over the phone. He’s 25 years old now, mind you. But he still asks.

It’s ok. You see, I know when he does this, it’s because he’s got another friend there – sometimes even a few – and he’s been telling this story that his dad has the book memorized. And he’s bragging because you know their old man never memorized that book!

Now you have to know that if he calls (even at 11:00 at night my time, when I’m already in bed) and asks me to do that, then if I’m alert enough to remember how it starts (while being half asleep) I just do it.

The curious part for me is that I realize how much I like that he feels comfortable enough to call me in the middle of the night for something so inconsequential. I like that we have a level of familiarity and deep love for each other that this imposition on my sleep is the kind of thing that amuses me more than annoys me. I like that he enjoys talking about his dad in a way that lets people know how he feels about me. He thinks it’s so cool that I still remember that book.

That text from last night? Here’s the rest of it…. 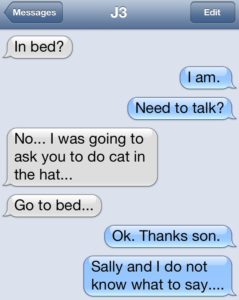 He let me off the hook. It’s all part of the give and take of being human I guess.

But then, I think I lied awake for about twenty minutes trying to recall the words in the book.

I guess, in that moment, I didn’t want to be merely human, even half-asleep. I wanted to be able to do it. It was part of the fun. I laid there, wondering whether I could recite the whole thing or get stumped part way through. In fact, it almost bothered me a little that I wasn’t able to do it in “grog mode,” just because I know what a kick he gets out of it when I recite it off the cuff.

I sent this to him the following morning…. 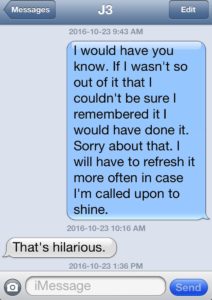 Trust me, it’s wasn’t a show-stopper or anything. But sometimes, when you’re half-asleep, things have a whole different perspective to them. I was fascinated by what a big deal that was to me at the time.

And as I was thinking about it, God Snuck Up On Me.

As I was going through this exercise in my head, I remembered a scene from the movie, “As Good As It Gets,” where Jack Nickolson says to Helen Hunt, “you’re the kind of woman who makes me want to be a better man.”

I guess this kid likes to have me recite this book in a way that makes me want to be able to do it better – even in my sleep.

And then, God brought a fresh revelation to me of what His heart is for us as his children.

It reminded me of the father heart of God.

I recalled an article from long ago by John Dawson about this reality of the father heart of God.

Part of God’s relation to us as a father is that He wants us to look to Him to show Himself strong in our lives, in our circumstances, in our relationships and in our walk with Him. He desires to be with us in such an intimate relationship that when we can call on Him, we do so fully expecting Him to do what we ask in faith, because we know that’s just who He is.

He is “the God who comes through for us.”

God wants to walk with us, to spend time with us so much that when we ask for things, it’s out of a relationship that looks like a kid and his daddy who love each other. And the kid just knows His dad is a hero. And the dad just does “hero” because this kid is his kid, and dad’s “hero-reputation” is at stake.

But the kicker is….

God wants us to be so much in love with Him that the stuff we ask for is always secondary to just enjoying Him for who He is.

I love that my son feels comfortable enough with me and that we are close enough that if he wants to brag about how his dad has “The Cat In The Hat” memorized, then I’m willing to take his call and spew it out. We BOTH get a kick out of it.

If you’re not seeing that God enjoys you approaching Him with expectation to show Himself strong, then you don’t know Him well enough yet. He is good, and He is crazy about you.

God reminded me of the passage in Luke 11:

Then Jesus said, “Imagine what would happen if you went to a friend in the middle of the night and said, ‘Friend, lend me three loaves of bread. An old friend traveling through just showed up, and I don’t have a thing on hand.’

“The friend answers from his bed, ‘Don’t bother me. The door’s locked; my children are all down for the night; I can’t get up to give you anything.’

“But let me tell you, even if he won’t get up because he’s a friend, if you stand your ground, knocking and waking all the neighbors, he’ll finally get up and get you whatever you need.

Now if you are shamelessly persistent, it might be because you are not perceptive enough to know that you should feel shame for what you’re asking of someone.

On the other hand, it just might be that you feel no shame because of the nature of the relationship. In this same conversation, Jesus pushed the point that it’s GOOD to be shamelessly persistent with God:

Don’t bargain with God. Be direct. Ask for what you need. This is not a cat-and-mouse, hide-and-seek game we’re in. If your little boy asks for a serving of fish, do you scare him with a live snake on his plate? If your little girl asks for an egg, do you trick her with a spider? As bad as you are, you wouldn’t think of such a thing—you’re at least decent to your own children. And don’t you think the Father who conceived you in love will give [good gifts] when you ask him?

Jesus’ point was that we SHOULD get a little “pushy” sometimes. God can handle it.

In fact, it seems Jesus’ point was that your heavenly Father even kind of likes it when you’re pushy rather than wishy-washy.

Remember that bit about Jesus preferring we were rather hot or cold than luke-warm?

I am convinced that one day in heaven, there will be rooms of remembrance.

And in those rooms there will be tapestries on the walls, woven from the threads of our moments of intimacy with our heavenly Father while we were here on Earth. There will be some threads in there that will be for all to see; there might even be those occasional ones woven into those tapestries that forever, only you and your heavenly Father will know and understand.

But whether they are public or uniquely between you and Him, they will be an eternal declaration of sacred moments between you and your heavenly Father while you were yet on earth, and you loved each other – remembrances created in time, but celebrated for eternity.

Some of those remembrances will be about How you bragged on your Father and expected Him to show off; and so He did.

I believe there will be remembrances of all the times we asked God to show Himself strong; where God looked down on us, looked beyond our faults and saw our faith in Him and was pleased that we reminded Him of His word and put a demand on the relationship we have with Him. These forever memories will be trophies of grace, on eternal display, of all those times we had interactions with our papa, where we asked Him to show off and He did, just because we asked.

I don’t believe that kind of faith is bothering God. I think it is honouring to Him. And I think He enjoys it.

The Greatest Thing God Wants
How To Overcome Besetting Sin
There Are Some Decent People In This World
Tags: Dr Suess, Father Heart Of God, importunity, persistence in prayer, prayer