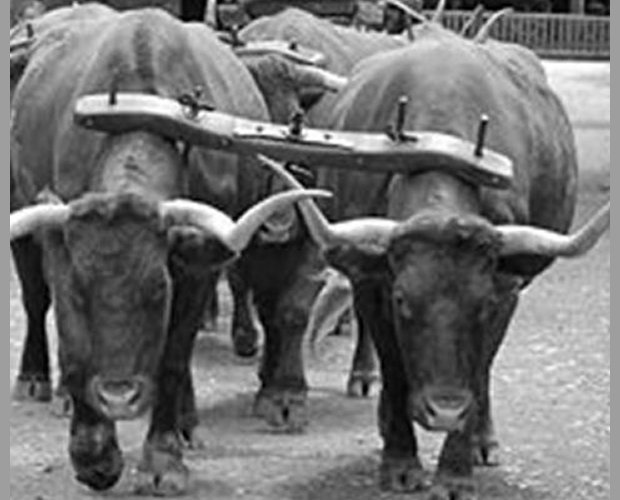 Think about ancient people that were so poor that they did not own any oxen. Jesus is saying that we can be subjected to loads that should be pulled by animals.

Only the poorest people would use a yoke to pull their loads. When used figuratively, a yoke represented slavery or submission; Jewish teachers spoke of bearing the yoke of God’s kingdom, through the yoke of the law. Only God would call the yoke of the kingdom or of the law “my yoke.”[1]

All their lives, Jesus’ listeners had been tethered to the Law of God and it was overwhelming. Instead of that, Jesus offers to share the load with us. As the other one in the yoke, he helps us to pull the weight of God’s Law.

Elsewhere he said that he had come to fulfill the requirements of the Law and not abolish it. Without Jesus, we are trying to pull an impossible load and the path is all uphill.

The Pharisees spoke of 613 commandments, and their halakot (binding interpretations) produced an overwhelmingly complicated approach to life. In our quest to know God’s Word it is good to remember that we can turn Jesus’ yoke into an equally unbearable burden unless we consciously recognize that discipleship to Jesus is not essentially a religious obligation. Rather, ours is an intimate relationship with the One who calls, “Come to me” and “learn from me.” As complicated as life may become, discipleship at heart simply means walking with Jesus in the real world and having him teach us moment by moment how to live life his way.[2]

Walking with Jesus is so much easier than walking alone trying to fulfill the Law.

COME TOGETHER
DIALOGUES OF THE DEAF
LOVING WITH A BROKEN HEART
Tags: Inspiration, Rev Kevin Rogers