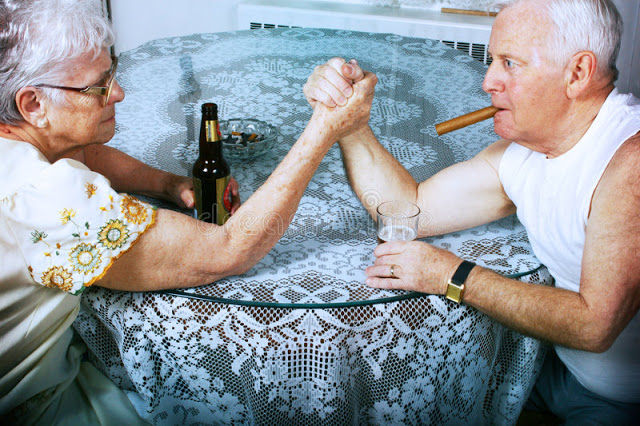 Close one eye and look at something ahead of you. Assuming that you have two working eyes, the view from one eye will have less depth perception than two eyes working together. You will also have less peripheral vision with only one eye. If you lose sight in one eye, you are fortunate if the other eye can still see.

You will often find that Christians fall into one of two camps on a biblical view of marriage. These are categorized as complimentarian and egalitarian. Both views find their roots in Scripture and shine a light on how we approach gender distinctions and the distribution of God’s work in the church and in the family. Both views are looking for harmony and balance with God’s original design. The following gives you a basic outline of the difference between the two.

·      Belief that only men should hold church leadership positions over other men. Usually, women may hold positions that do not place them in authority over men.

·      A patriarchal view of the family, with the father as the head.

·      The view that a man should love his wife as Christ loved the church, and a woman should submit to her husband as the church submits to Christ.

Just like complementarians, not all egalitarians are of one accord. However, most would agree to the following:

·      Men and women can both hold church leadership positions.

·      Spouses are equally responsible for the family.

·      Marriage is a partnership of two equals submitting to one another.

While I understand and respect the complementarian perspective, I hold the egalitarian view. Maybe each is a lens that can show us a different angle. Just as you have two eyes to gain depth perception in your vision, you may want to open both eyes and have a Complegalitarian or Egalicomplimentarianvision. See with both eyes in a unified way. You may not have to shut one eye to see correctly.

Let’s look together at an example from Scripture using both eyes to see with more depth. This is a passage where Peter seems to speak from a complementarian view, but we can also see it through an egalitarian perspective.

Wives, Follow The Lead Of Your Own Husbands. Suppose Some Of Them Don’t Believe God’s Word. Then Let Them Be Won To Christ Without Words By Seeing How Their Wives Behave. 2 Let Them See How Pure You Are. Let Them See That Your Lives Are Full Of Respect For God. 3 Fancy Hairstyles Don’t Make You Beautiful. Wearing Gold Jewelry Or Fine Clothes Doesn’t Make You Beautiful. 4 Instead, Your Beauty Comes From Inside You. It Is The Beauty Of A Gentle And Quiet Spirit. Beauty Like This Doesn’t Fade Away. God Places Great Value On It.

5 This Is How The Holy Women Of The Past Used To Make Themselves Beautiful. They Put Their Hope In God. And They Followed The Lead Of Their Own Husbands. 6 Sarah Was Like That. She Obeyed Abraham. She Called Him Her Master. Do You Want To Be Like Her? Then Do What Is Right. And Don’t Give In To Fear.

7 Husbands, Consider The Needs Of Your Wives. They Are Weaker Than You. So Treat Them With Respect. Honor Them As Those Who Will Share With You The Gracious Gift Of Life. Then Nothing Will Stand In The Way Of Your Prayers.

Here are two strategies to lift up the Lord Jesus in marriage. One focuses on the wife winning her husband; the other focuses on the husband winning his wife. The wife’s strategy centers on her testimony to her husband (1 Pet. 3:1–6). The husband’s strategy centers on his treatment of his wife (3:7). What she says and how he treats her determine whether Christ is exalted in the marriage.[2]

A believing wife can influence an unbelieving husband by demonstrating Christ-like character. Her purity of attitude and behaviour draws his attention to her inward beauty. By referencing Sarah as a holy woman of the past, the example is given of a woman who is willing to trust her husband and follow his lead. Their story is a strange one, but God’s fulfillment of vision in Abraham required it to become her godly vision as well. It would take her willingness to participate to see the miraculous birth of their son Isaac.

Perhaps the stumbling block for some will be verse 7 where Peter says to husbands that their wives are weaker than them. Does he mean physically weaker? While that may often be the case, you should the woman across the street from us. I watched her carry a 4×8’ sheet of plywood from the back of her van and into her house. She might be physically stronger than some men.

But let’s assume for a minute that generally speaking women are physically weaker than men. Usually they have less muscle mass and often smaller skeletal frames. Peter in this case, would be saying don’t force your wife to bust her back for your benefit.

Verses 1-6 seem to show the woman who leads a man while verse 7 shows a man that leads a woman. The key is that they are both strong in different ways that, may or may not fit into gender stereotypes.

Another reading of weakness may be that women were disadvantaged in their culture and that a Christian man should give respect, honour and great consideration to her plight.

At the time Peter writes, Roman law had begun to soften towards women. During the first century A.D., laws began to be passed giving women rights of property ownership and protection from domestic abuse, but for hundreds of years before this, the concept of the pater familas had reigned in the lawbooks and in the home.

The pater familias, or “family father” held sway in the home on all decisions regarding property and family. All property remained legally his until his death – should he live to be eighty, none of his adult sons could hold property. Moreover, he held the power of life and death (vitae necisque potesta) over every member of his family. Infants deemed too expensive to be raised could be left on the temple steps at his order, either to die from exposure or to be taken and raised as slaves.  Adult children could be executed by fathers who believed them to be rebellious or deceitful. And most relevant to our discussion, wives whose husbands held the legal power to put them to death could hope for little protection from domestic violence.

So, the Rome to which Peter writes, much like the American South in the eighty years following Abolition, is a Rome in which new laws are on the books but practices remain much the same. Peter instructs wives on how to live carefully with an unbelieving husband who could cause them (or their children) physical harm for having converted to a new religion, and then he admonishes husbands of unbelieving wives not to deal harshly with them, even though the culture would allow it.[3]

No matter how you look at it, Christ calls men and women to exhibit new humanity in their marriage. We follow Jesus against the grain of prevailing culture and add our strength where there is an apparent weakness.

From the egalitarian view, I would ask how might the modern husband be the weaker sex needing the gracious strength of his wife?

My worship of God is dependent on the love I hold toward my wife.

In all of our family relationships, we can know that love is always purposeful and necessary. If you have suffered catastrophic failure at home, you can be forgiven and experience new growth. You can love as long as you have breath in your lungs. You are part of God’s family and are known by His Name.

A stunning call to contentment in Christian marriage, whether we live in the first century or the twenty-first. The dignity and modesty of a woman—and her good conduct—have the power to call her husband to faith and devotion. Husbands are not to take advantage of this superior conduct on the part of their wives, but are to reciprocate, indeed, to give honor. Peter’s image of marriage is one of sacramental union, not merely of legal contract. Contrary to the inheritance customs of the time, husband and wife are heirs together of the grace of life (v.7). Failure to live with understanding with one’s spouse even affects one’s relationship with God.[4]

So, what if you are single, separated or divorced? What then of your singleness? Without starting another whole thread of thought, let me summarize by saying. You are called to the same standard of fidelity and purity that a married person is. You are not less than in God’s eyes because you are single and possess the great advantage of wrapping your whole life around Jesus alone. If you feel that is substandard, you may not have grasped how wide and high and deep the love of Jesus is for you.

58 My dear brothers and sisters, remain strong in the faith. Don’t let anything move you. Always give yourselves completely to the work of the Lord. Because you belong to the Lord, you know that your work is not worthless.

Your love is not worthless. You are a vital member of God’s family and a lifelong learner. What do you need to learn and put into practice? That’s a worthwhile pursuit.

DIALOGUES OF THE DEAF
THE PRAISE DOOR OF SALVATION CITY
A BORROWED SLOGAN
Tags: prayer