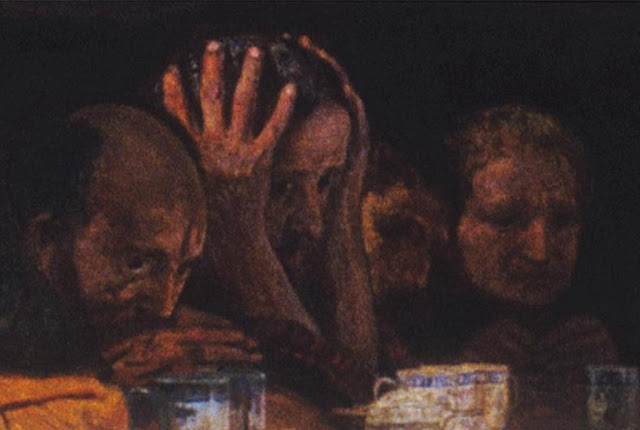 Often, we think that a person commits their worst sins prior to salvation. We assume that a life without Christ will have terrible deeds and failures and that there will be a dramatic turnaround after a person repents and turns to Christ.

While this may often be the case, it is no guarantee that a person will not have tremendous failures and terrible deeds after making a decision to follow Christ.

When Christians sin and fail, we need to return to the Lord and repent in sorrow. Consider the men who sat at the table with the Lord on the night he was to be betrayed.

They had been chosen by Jesus to follow and learn the ways of God’s Kingdom. They lived together, heard the teachings and even participated in miracles. They had travelled out and taught the things He taught them. If they were part of our church, we would look to them as leaders. And still they failed.

Judas gave up on Jesus and betrayed Him. The sorrow that followed overwhelmed Judas and he took his own life. Such awful despair! Some of you have felt the sting of betraying Jesus and been tempted to never return.

Peter vowed his faithfulness to death and then betrayed the Lord three times in a single night. At first he tried to defend the Lord when the soldiers came. Peter tried to defend Jesus and nearly killed a man when he cut off the man’s ear. But then he fled. Later the same night, he cursed and said he had no knowledge of the man.

When Christ’s crucifixion took place, the disciples fled and Jesus had no defender.

But Jesus returned to the disciples after rising from the dead. They were all in a state of shame, shock, and failure when He came to them. In their weakness He came to them.

Jesus came to Peter on the beach and renewed their relationship.

He appeared to Thomas in his doubts and revealed Himself as the Risen One.

He came back to the ones who ran away.

Do you not think that He would also come to you and invite you to be renewed in your relationship and forgiven of your failures?

Yes, some of our worst sins happen after we know the Lord. It is then that we truly know how awful sin is and are most disturbed by our failures.

THE YOKE OF LOVE
FIND YOUR FIT BEFORE YOU HAVE A FIT
PARENT-CHILD RECIPROCITY
Tags: Inspiration, Rev Kevin Rogers