THE BEACON ON MARS HILL 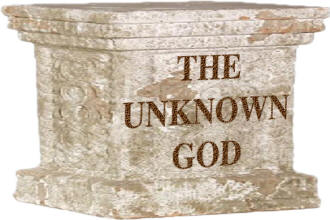 Saul of Tarsus was a philosopher, debater and religious teacher that moved easily between cultures and had a mission to educate everyone in the single, greatest transforming agent of his own life—the one and only Jesus. Once his greatest nemesis, the Lord became his greatest friend. Through Christ Paul was able to find the antidote for his own consumption from the Tree of Knowledge.

In his journeys, he found his way to Athens. It was an ancient city that typified the Coexist bumper sticker. The region of the city known as Mars Hill was lined with every kind of temple and idol for every conceived religious and philosophical system.

As a scholar, places like this fascinated and perplexed him. He’s in the meeting place where lengthy debates were held, and ideas explored. He has something to say here and finds his starting point at a shrine to the Unknown God.

24 “He is the God who made the world. He also made everything in it. He is the Lord of heaven and earth. He doesn’t live in temples built by human hands. 25 He is not served by human hands. He doesn’t need anything. Instead, he himself gives life and breath to all people. He also gives them everything else they have. 26 From one man he made all the people of the world. Now they live all over the earth. He decided exactly when they should live. And he decided exactly where they should live. 27 God did this so that people would seek him. And perhaps they would reach out for him and find him. They would find him even though he is not far from any of us. 28 ‘In him we live and move and exist.’ As some of your own poets have also said, ‘We are his children.’

The first thing we hear Paul identify is the distinction between Creator and Creation. The God that they did not know made the world and its contents. As far as their knowledge of existence extends, this is the God who put it in place.

Then he says something truly intriguing to people who have dedicated their lives to building temples and worshipping their gods.

He does not live in these temples built by human hands, and he is not needy. The sacrifice, the lengthy prayers, and the competitive drive to win the god’s approval is completely irrelevant to the true God. The politics and the influence that come from these man made, branded worship centres are not what he requires.

You cannot create a god to serve, but you can look for the true God that gives us all life.

God is not dependent on us; we are dependent upon Him. That is the radical notion for these temple builders. Jesus would tell his own religion that they could tear down the Temple in Jerusalem and in three days he would rebuild it. Jesus knew that he was the Temple of God.

As will be revealed elsewhere, fabricated cathedrals and shrines are not the intended temple of the true God. The truly radical notion is that we become His Temple. He will live in us and not in the work of our hands.

Paul tells the Martians (what else can you call people who live at Mars Hill?) that they have not accomplished anything that God needs from them. Instead, God has given life to them. The false notion of temple builders is the idea that we will bring a god to life. We will invoke the presence of a superpower and convince it to work with us to make our world better.

By ascribing God as the true source of all that is created and his unified distribution of all people through time, Paul suggests that this God alone is personable and intimately knowable. Understanding our origin inspires the homeward journey. God is imminently near to all people through all time. Paul is busting the distant and distracted mythology of so many of their idols.

There was an idea in a popular poem that we are the children of the god Zeus. Paul quotes their verse and says that they are onto something in this notion that we are children of God. We are the offspring of God.

Inspiration always has that ‘new car smell’ to it. There is something fresh and valuable when God opens our mouth to bring a message. Whether it is a new song, an inspired prophetic utterance, a novel, a poem, or a personal message spoken in love; creative expression thrills the one giving it.   After nine […]

WHEN YOU LOSE YOUR VOICE

When you lose your voice, you will find other things to do and other ways to communicate non-verbally. Zechariah was muted, but his heart turned to the promise of a son that would prepare the way for the Messiah. The promise caused him to renew his efforts at lovemaking with Elizabeth. He was unable to […]

ZECHARIAH AND THE GAG ORDER

John the Baptist’s father was named Zechariah. He and his wife Elizabeth belonged to the tribe of priests in Israel and were advanced in their years. They knew about a lack of fulfillment. She was barren and so they had no children. Barrenness is a block of the creative impulse.   What does God do […]