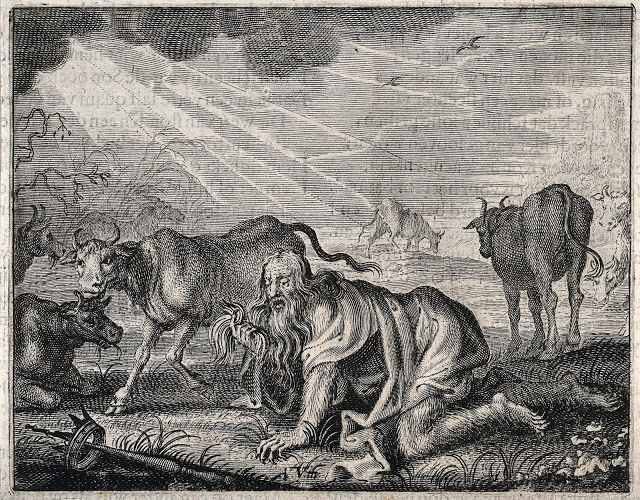 There is a story in Daniel 4 of a king who went crazy and thought he was a cow.  It is a tragic story of what can happen to a person who gets too proud and self-reliant.  We can learn about the importance of staying humble from King Nebuchadnezzar.

Babylon was an ancient kingdom that ruled the world and was renowned for its technological and artistic achievements.  Nebuchadnezzar was an ego-maniacal king who had set up a 90-foot gold statue of himself and asked people to bow down and worship his idol when the call to worship was played.

Three of his leading men were Hebrews and would not bow so he had them sentenced to death by burning them in an oven.

God spared the lives of Shadrach, Meshach & Abednego and they walked out of the fire untouched.  King Nebuchadnezzar was so amazed, that he made a decree that everyone should worship the Hebrew God.

Nebuchadnezzar was impressed with power and publicly became a great fan of Jehovah.  He attributed his great success as king to the High God.  He was like many modern-day idols that give thanks to God publicly when they receive an award.  The thought is there, but the surrendered life is not.

One night the king had a nightmare and described it to another Hebrew, a prophet by the name of Daniel whom he called Belteshazzar.

Chop Down The Tree, Lop Off Its Branches, Strip Its Leaves And Scatter Its Fruit.  Chase The Animals From Beneath It And Shoo The Birds From Its Branches.  But Leave The Stump And Roots In The Ground, Belted With A Strap Of Iron And Bronze In The Grassy Meadow.

Let Him Be Soaked In Heaven’s Dew And Take His Meals With The Animals That Graze.  Let Him Lose His Mind And Get An Animal’s Mind In Exchange And Let This Go On For Seven Seasons.

The Angels Announce This Decree, The Holy Watchmen Bring This Sentence, So That Everyone Living Will Know That The High God Rules Human Kingdoms.  He Arranges Kingdom Affairs However He Wishes And Makes Leaders Out Of Losers.

Daniel reluctantly interpreted the dream for the King.  The tree that grew so tall was the King, Nebuchadnezzar.  His rule was great and touched the four corners of the world.  He was extremely powerful and had become arrogant and untouchable.  His power blinded him to his God-given responsibilities.  God was going to cut him down and drive him crazy.  He would act like a cow, even eating grass and living in the field.  This would last for seven seasons.  It was because the king would not acknowledge that God was ultimately in control of his life and gave him his power.

The part about the tree stump and roots indicated that God would bring him back as king after the seven seasons had passed.  This craziness would pass after the king came to his senses and realized that God was all powerful.

“So King, Take My Advice:  Make A Clean Break With Your Sins And Start Living For Others.  Quit Your Wicked Life And Look After The Needs Of The Down-And-Out.  Then You Will Continue To Have A Good Life.

Have you ever had a severe warning from God?  Did it shake you up at the time?  It’s easy to see the severity of consequences that will come from sin and then ignore the warnings until it is too late.

All This Happened To King Nebuchadnezzar.  Just Twelve Months Later, He Was Walking On The Balcony Of The Royal Palace In Babylon And Boasted, “Look At This, Babylon The Great!  And I Built It All By Myself, A Royal Palace Adequate To Display My Honour And Glory!”

The Words Were No Sooner Out Of His Mouth Than A Voice Out Of Heaven Spoke, “This Is The Verdict On You, King Nebuchadnezzar:  Your Kingdom Is Taken From You.  You Will Be Driven Out Of Human Company And Live With The Wild Animals.  You Will Eat Grass Like An Ox.  The Sentence Is For Seven Seasons, Enough Time To Learn That The High God Rules Human Kingdoms And Puts Whomever He Wishes In Charge.”

It Happened At Once.  Nebuchadnezzar Was Driven Out Of Human Company, Ate Grass Like An Ox, And Was Soaked In Heaven’s Dew.  His Hair Grew Like The Feathers Of An Eagle And His Nails Like The Claws Of A Hawk.

The story goes on to see the king eventually come to his senses and restored as king.  His conclusion was that God does the right thing in the right way.  God knows how to turn a proud person into a humble one.

A GOOD IMAGINATION
WAKE UP NOW
FAMILY STRESS FRACTURES
No tags for this post.