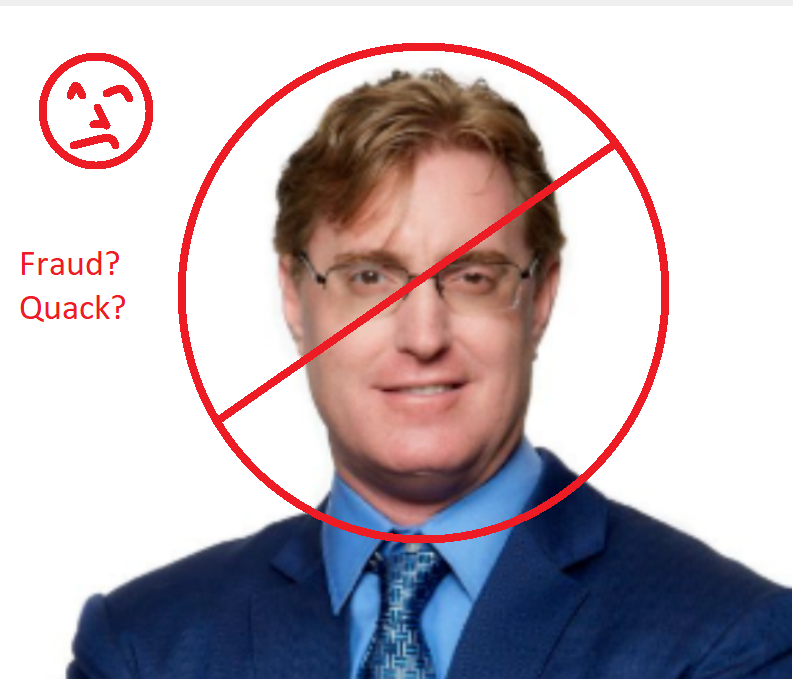 People like Dr. Bryan Ardis are a lightening rod when discussing Covid.

I get the controversy. He is, after all, not a “real doctor,” depending on your perspective. He’s “only” a chiropractor. So what does he know about immunology. Right?

I appreciate my critics, too. Even if they don’t know it.

One of my more popular posts is one I wrote last October regarding Dr. Bryan Ardis’ “recipe” for how to protect yourself from the spike protein in the vaccines.

I received a lot of questions regarding this post: how much of this or that should I take; why does he say this or that? Things like that.

And my response was always the same: I’m not a doctor. I don’t know. This is what the doctor himself said. Ask him.

But I did receive a well-intentioned rebuke from a reader. She wrote this (and if you go to the original post, you can see her comment in the comments section at the end of the post).

I am concerned about the amount of misinformation posted on this site. There is a great deal of uncertainty about Covid-19 & the best way to treat it, but it appears Bryan Ardis who is just a chiropractor, is taking advantage of the uncertainty & confusion to make money and attain notoriety. So much of what he says has no basis in fact.

I ask the question because there are many times in history that it wasn’t the most “qualified” who made the important discoveries. Sometimes, it was the most diligent to dive into the facts and study them and to investigate and DO SCIENCE to get to the bottom of what the facts actually mean….

This is my response (with additional comments added for clarity).

Sorry for the late response. I got busy with a number of things and then in December I actually ended up in the hospital with Covid for 6 days. So I’m just catching up.

I can appreciate your concerns though I obviously disagree with how well-founded they are. And I think this has a lot to do with the different a priori assumptions we bring to the discussion before it even happens.

For those who might not have heard the term “a priori assumptions,” it is a term from Latin and it refers to all those things we assume to be true when we discuss an issue with others. We assume it to be true because we “see” it as “self-evident.”

Definition of a priori

1a: DEDUCTIVE: relating to or derived by reasoning from self-evident propositions— compare A POSTERIORI: presupposed by experience2: being without examination or analysis : PRESUMPTIVE: formed or conceived beforehand

We all make a priori assumptions. Because, well… because some things are “obvious.” (Right? Maybe? Or not?)

I also find it interesting that most who just intrinsically trust doctors seem to do so on the basis of their education and the assumption that they have been granted a medical degree and are therefore to automatically be trusted regarding the prescriptions they write, their knowledge of (in this case) immunology and the like. In reality, a GP doesn’t get a lot of hours of education in medical school (at the pre-specialist level) regarding immunology and vaccines. They do get some but not a lot.

With regard to Dr. Ardis (chiropractor) I also think we come at this from much different perspectives. As an aside, when I was in the hospital and I was debating my vaccine status and how good or bad they are with the internist assigned to my care, he did seem to recognize (judging from his facial expressions, though he didn’t directly admit) I brought some points to the discussion he had not considered before. So there’s that.

Look. Saying Dr. Ardis is a chiropractor and is therefore not qualified to speak to these issues is kind of like what the doctors said to Florence Nightingale in her day – they were the ones with the education and she was just a nurse. But (if you’ve studied history in this little niche) it turns out that little nurse Nightingale was right and all the powerful, educated doctors were wrong.

For those of you not familiar with Florence Nightingale, you need to look into this history a bit. Because if we do not learn from history, we repeat it over and over. Because that is our nature as humans. Unfortunately…

As I understand the story (and you can PLEASE correct me if I have it wrong, but) Florence Nightingale was a nurse who bumped heads with some of the doctors of her day because she thought they weren’t practicing proper hygiene and had to fight their “higher education” to convince them of the need of proper handwashing between patients. And in the end, it turned out the nurse Florence was right and the more highly-educated doctors were wrong but they didn’t want to hear it from a nurse.

For a more comprehensive view of where she fit in to the long history of the battle over handwashing you can find an interesting article about it here. But the takeaway, as I understand it, is that Florence was more “right” than the doctors she bumped heads with over the issues of her day, even though she “didn’t have the best credentials.”

My take on “credentials, qualifications,” and “the right to be heard.

My approach to this is not just that I look for only the most qualified in any field and exclude any opinions from those “less qualified.” My approach has always and continues to be that I look for anyone with enough education and experience in their field or related field (in this case, doctors, nurses, immunologists, and yes, chiropractors) that has enough credentials to show they are capable of rigorous study and analysis of data and then I LOOK AT THE EVIDENCE THEY BRING TO THE TABLE. I don’t automatically dismiss any opinion (whether I like it or not, or whether I agree with it or not) simply because “they are not qualified.”

If they’ve shown a level of qualification that shows me they may have enough knowledge and experience to bring facts to the table that need to be considered, I do so. In my many years of experience in my areas of expertise, I’ve had to come to the hard realization that many who are the “most qualified” are not the most informed, nor are they the most capable of addressing the issues that need to be dealt with.

So I listen to Dr. Ardis, NOT because of direct qualifications in immunology and virology (I have many I follow with those qualifications, too, who agree with him by the way). I listen to Dr. Ardis because his level of education and certification in a medical field tells me he has a base level of knowledge enough that I need to consider his input and examine the facts he brings to the discussion and evaluate what he brings based on the strength of the evidence.

And if the most qualified immunologist or virologist shows up and says he doesn’t know what he is talking about, I want to know WHY he or she says it, and what evidence (research, peer-reviewed papers, studies, etc) or direct data he or she presents to refute it. And when they do that, then I research what they say to see if it does hold up.

But I didn’t want to leave it there. Because whether Katie recognized it or not, she, too, has her own set of a priori assumptions. And maybe just a few prejudices she might not be aware of.

Anyway, I continued with this….

You’ve made some pretty strong accusations against Dr. Ardis. You speak as if you know his motives and his heart. How do you know what his motives are? Do you know him? Can you prove that, or is it just an opinion?

You also say, “so much of what he says has no basis in fact.” Can you give any specifics as to what, if any, particular things he says that have “no basis in fact?”

Let’s start there. Teach me. I’m open to learning.

I just hope you are, too.

Listen. I’ve been wrong before. And recognizing where I needed to change my mind and admitting I was biased, or prejudiced or just plain ignorant regarding topics I was talking about has gotten me a long way.

I learn much from informed people who disagree with me if they are willing to bring facts and data into the discussion that challenges my a priori assumptions.

But if you’ve already got your mind made up about people’s motives and aren’t open to reconsidering that you are maybe bringing HUGE assumptions and prejudices into your armchair judgements about why people are doing what they are doing, you might have it wrong.

And I will admit, I bring a few of my own.

Pfizer is a huge advertiser on every major news media outlet out there. And if you run a news network as a business, you are smart enough to know you don’t want to bite the hand that feeds you.

Back to you, Katie. I will be waiting.

How To Protect Yourself From Vaccinated People (And From The Vaccine)
NIH Article Condemns The Campaign For mRNA Vaccines As Worst Medical Disaster Ever In Vaccines.
Pine Needle Tea as a Potential Antidote for Transmission of Spike Protein
Tags: Covid-19, My Take, Pfizer