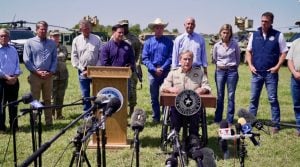 During a CNN interview on Wednesday, Taiwanese President Tsai Ing-wen confirmed that U.S. troops were on the ground in Taiwan to assist in strengthening the country’s defenses as the threat from China is “increasing every day.”

Tsai told CNN’s Will Ripley that the situation has gone south in recent years as “China’s plan towards the region” has become “very different.”

“That plan includes war threats over Taiwan, clashes with Japan and the East China Sea and militarizing manmade islands in the South China Sea, posing a direct challenge to seven decades of U.S. military supremacy in the Indo-Pacific,” Ripley said. “In response, the U.S. ramped up arms sales to Taiwan, selling the island $5 billion in weapons last year. President Tsai confirms exclusively to CNN, U.S. support goes beyond selling weapons. Does that support include sending some U.S. service members to help train Taiwanese troops?”

“Well, yes,” Tsai responded. “We have a wide range of cooperation with the U.S., aiming at increasing our defense capability.”

Later in the interview, Ripley asked, “Do you have faith that the United States would defend Taiwan if the Mainland were to try to move on Taiwan?”

“I do have faith, and given the long-term relationship that we have the U.S. and also the support the people of the U.S., as well as the Congress, and the administration has been very helpful,” Tsai said, later adding that Taiwan needs to “expedite our military reform so that we have the ability to defend ourselves. And given the size of Taiwan compared to the size of [China], developing asymmetric capability is the key for us.”

Tsai’s comments come a few weeks after China sent over 150 military planes into Taiwanese air space, the largest incursion ever by the Communist country.

“The defense of Taiwan is in our own hands, and we are absolutely committed to that,” Taiwan Foreign Minister Joseph Wu told ABC Australia in response to China’s aggression.

Facebook whistleblower reveals her identity so that ‘no one can question this is real’
Banned congressional candidate Laura Loomer commissions caricature of Twitter CEO as Taliban leader
OSHA Reports it ‘Has Suspended’ all ‘Implementation’ and ‘Enforcement’ of Biden’s Vaccine Mandate
Tags: Biden, Sara Carter