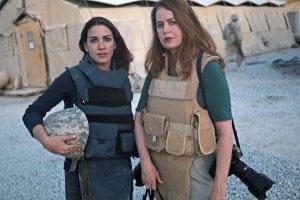 On the latest episode of the Sara Carter Show, host Sara Carter spoke about the final days of the U.S. military’s presence in Afghanistan. For her family, Afghanistan has been a central part of their lives.

“Our entire lives since September 11, 2001 have been all consumed,” Carter said. “Unfortunately, a lot of it with a war and terror, either covering the war on terror as a journalist, or my husband fighting in the wars overseas trying to target those terrorists that were planning on bringing that terror here to the United States again.”

RELATED: Sara Carter on the emotional aspect of leaving Afghanistan

As a result of the U.S. military leaving, hundreds of thousands of people have left along with them. In a full circle moment, Carter’s family is becoming a host family for a family of Afghan refugees.

“But we do have an Afghan family coming,” Carter said. “A former interpreter who I worked with, and his beautiful little baby boy, and his wife who did make it out. I’m still trying to get the rest of his family. And my husband is actually super thrilled about this.”

Meanwhile, two weeks ago, President Biden met with officials from Kosovo and Albania recently in an attempt to encourage more countries to take in Afghan refugees. However his efforts were in vain. Instead of helping people fleeing Afghanistan, countries hesitated to take them in because they’re concerned about COVID-19 health screenings. So, Carter is proud that she can do her part to help them.

“It was almost as if Marty, my husband, was doing what the United States could not do,” Carter said.

According to Carter, there could be anywhere between 300 to 1500 Americans remaining in Afghanistan. But the last U.S. soldier left Monday.

I don't necessarily endorse all content from this site but it's always good to get different perspectives. https://saraacarter.com/sara-carters-family-is-doing-doing-what-the-united-states-could-not-do-in-taking-in-afghan-refugees/