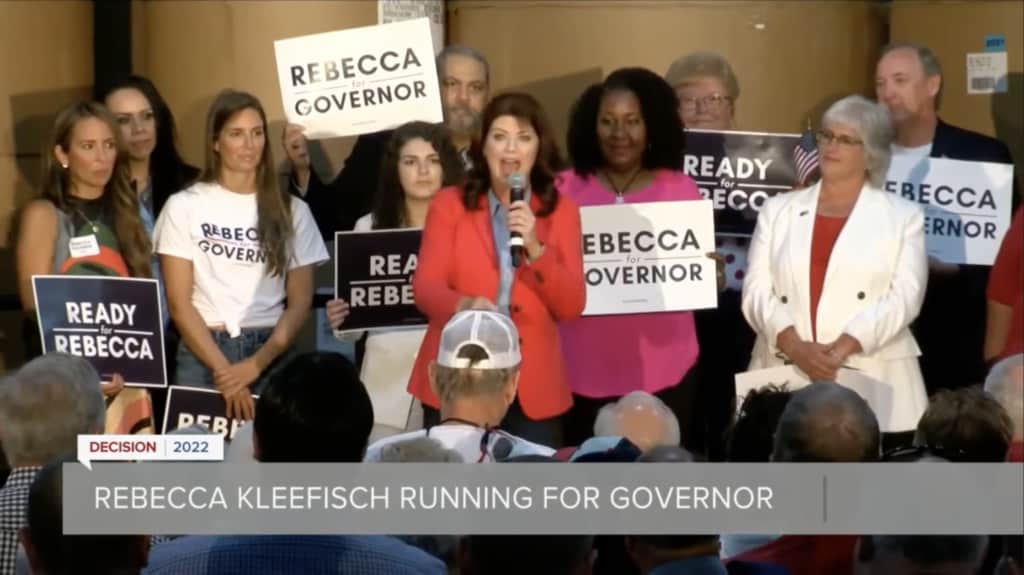 Wisconsin gubernatorial candidate Rebecca Kleefisch appeared on the Sara Carter Show to talk about the current dismal political situation. As a result, Kleefisch has recently decided to run so she can bring Wisconsin back to its roots.

Abov all, Kleefisch is against government mandates of any kind. To her, a vaccine mandate is “an epic, fresh new level of government overreach, creepiness” she told host Sara Carter. “It started with the Obama administration fresh in America’s mind,” the gubernatorial candidate said.”That was the beginning of the big type of big media, big government cabal that is truly threatening our American way of life. Patriots everywhere should be very, very concerned about this.”

In 2010, Kleefisch was elected Lieutenant Governor at the hight of the Tea Party movement. As a result, much of her state underwent a red wave. The whole movement was working against big government and big tech. Nowadays, Kleefisch isn’t against the COVID vaccine, but she wants less government involvement.

“Listen, you want to get the vaccine, great for you. You want to wear masks, great for you. You want to protect yourself against co-morbidities or practice great hygiene, or do any exercise in assuring that you prevent any hospitalization for COVID, you possibly can prevent, by all means, do it,” Kleefisch said. “But government should not in between your decision about what you do with your own healthcare. a doctor’s advice about the same government has no business stepping in between those private and sacred relationships.”

Now, Wisconsin’s current governor Tony Evers, is the opposite. He often takes on the roll of judge, jury and executioner in his seat as governor, according to Kleefisch. For example, when Wisconsin man Jacob Blake was shot and paralyzed by a police officer, Evers watched the footage. As a result, he sided with the protestors over the 30-second video rather than consult police officials. In the end, prosecutors did not charge the police officer.

“I plan to be the guy to relax to the great state of Wisconsin, we’re gonna change it so that once again our state is the jewel of the Midwest and is a destination,” Kleefisch said. “But under Tony Evers, we can possibly say that he has broken the state of Wisconsin, it’s not irreparably gone. There is so much good we can still do but Tony Evers is a weak and incompetent leader who has led to nothing but chaos in this state.”

Wisconsin elected Evers in 2018. He will be running for reelection.

Covid Vax Death Rate 21 Times Higher Than All Other Vaxxes!

German site Transparenztest.de has compared the figures for adverse events of COVID mRNA vaccines with other vaccines. The results are nothing less than frightening

Citing the figures in the current safety report of Germany’s renowned Paul Ehrlich Institute (PEI) from December 23, 2021, Transparenztest.de found “frightening” results:
“In the last eleven months, four times as many suspected adverse reaction reports and four times as many deaths in absolute numbers were reported for COVID vaccines alone than in the last 20 years for the totality of all vaccines used in Germany.”
Using the PEI’s latest updated figures, a total of 123,347,849 doses of COVID mRNA vaccine had been administered in Germany up to November 30th, 2021. Correspondingly 196,974 adverse drug reactions (ADR) were reported, of which 1,919 were deaths.
Meanwhile during the period of 2000-2020, some 625,500,000 doses of all other vaccines were given, of which there were only 54,448 ADRs, of which 456 were deaths.
18 times more ADRs per million
When one compares the ADRs per million doses, there were 18 times more ADRs per million doses for COVID mRNA vaccines than for all the other vaccines:

Using the raw data from the December 23, 2021 PEI safety report, DB-UAW database, the above chart is a comparison of COVID mRNA vaccinations up to 30 Nov 2021 (black) vs all vaccines 2000-2020 (gray) in deaths per 1,000,000 vaccine doses. Chart: Transparenztest.de.
In terms of presumed deaths per 1,000,000 vaccine doses, there are 21 times as many deaths with COVID vaccines as with all other vaccines vaccinated in Germany in the period 2000-2020. Expressed as a percentage, that is 2,200 percent.
Huge underreporting
A meta-study by Hazell et. al suggested that the average of “underreporting” in ADR databases was 94 percent. And according to a PEI report, the rate of reported suspected cases may be as low as five percent.
Moreover, according to the FDA and CDC-operated VAERS vaccination database, the rate of reported cases is only one percent. The number of unreported cases is thus estimated at 99 percent. Deaths and injuries are extremely likely far more widespread.
Using the 95 percent figure for underreporting, Germany’s deaths from COVID mRNA vaccines thus would be 38,380 deaths. Note: this figure is only an estimate and an extrapolation based on underreporting.

Also extremely worrisome is that data show how the rate of ADRs rises with each COVID booster shot. The more boosters a patient takes, the greater the risk of suffering an ADR becomes.

Transparenztest.de, raw data PEI safety report December 23, 2021, DB-UAW database. Comparison COVID mRNA vaccination (black) vs all vaccines 2000-2020 (gray) in deaths per 1,000,000 vaccine doses after triple vaccination, (booster). Chart: Transparenztest.de
Transparenztest.de summarizes:
The results are frightening. The difference factor to the other vaccinations increases by a factor of 43. With each additional vaccination dose (booster 4 / 5), the ratio worsens accordingly, or the risk of side effects resulting in death increases. The same applies, of course, to all other side effects.”
See more here: notrickszone.com
Please Donate Below To Support Our Ongoing Work To Expose The Lies About COVID19
PRINCIPIA SCIENTIFIC INTERNATIONAL, legally registered in the UK as a company incorporated for charitable purposes. Head Office: 27 Old Gloucester Street, London WC1N 3AX.