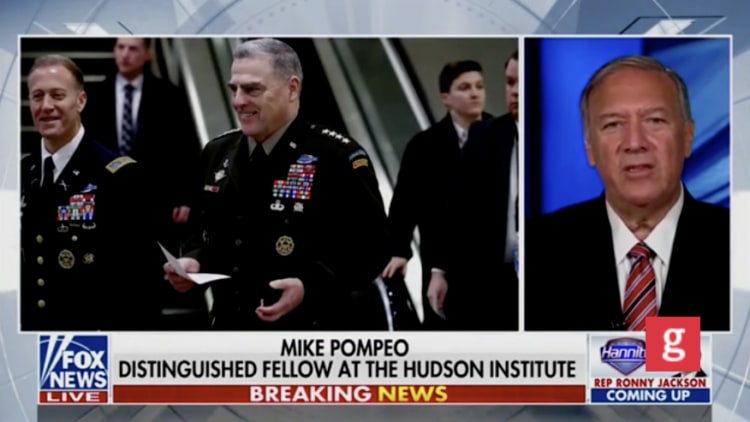 Former Secretary of State Mike Pompeo blasted Chairman of the Joint Chiefs of Staff General Mark Milley over reports that he kept then President Trump from nuclear weapons. In addition, Milley reportedly had several secret phone calls with Chinese officials to undermine Trump. Pompeo appeared on Hannity Wednesday to share his thoughts. According to Pompeo, Milley’s alleged behavior was “unconstitutional, incomprehensible, and completely out of line for any military leader.”

“He is not in the chain of command for operational activity,” Pompeo told host Sean Hannity. “So, this would be dangerous and a usurpation of authority that is historically anomalous.”

As a result, Pompeo is calling for further investigation. “We should make sure that we, as quickly as we can, figure out if General Milley spoke to Woodward himself,” he said. Bob Woodward is one of two authors behind the book that makes the allegations against Milley. “We should find out if Milley is prepared to testify. We could do it tomorrow or the next day to get clarity about what General Milley said.”

After the news about Milley broke, the Department of Defensed claimed there was no transcript of a reported call between Milley and senior Chinese officials regarding nuclear weapons. However, Pompeo believes there is still a way to verify whether or not a conversation happened. “I don’t know the DOD’s policy, Sean, exactly of whether there would be a transcript of this phone call, but I promise you there were note takers in the room,” Pompeo said.

“I’m very confident that conversation could be reconstructed.” Pompeo went on. “If you had a senior military leader, who was simply an advisor, tell the Chinese Communist Party that they would get notice of an attack, this rivals anything we have seen in our nation’s history. Only the president of the United States has the capacity to make those decisions. I would be shocked if then-acting secretary of defense gave him any authority to even contemplate that very conversation.”

The report comes out of Bob Woodward and Robert Costa’s book “Peril.” It will be released September 21st.

I don't necessarily endorse all content from this site but it's always good to get different perspectives. https://saraacarter.com/pompeo-says-if-milley-talked-to-china-it-was-an-usurpation-of-authority/