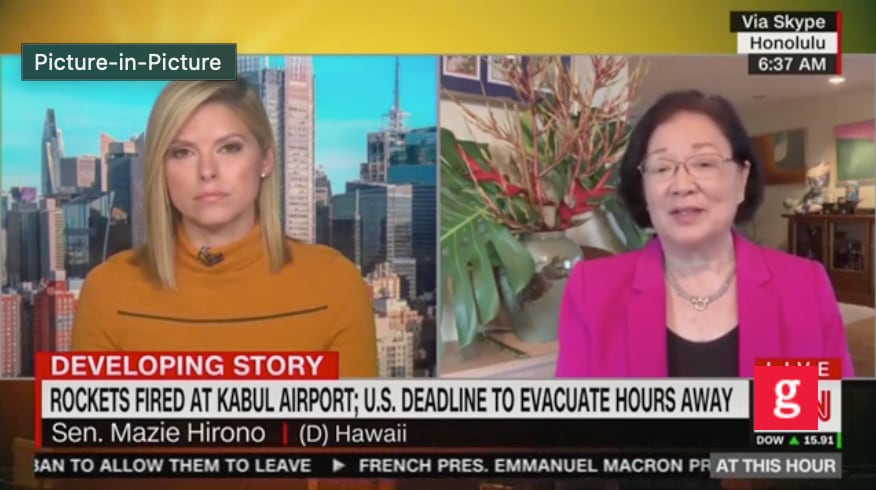 Sen. Mazie Hirono (D-HI) appeared on CNN to blame former President Trump for the botched withdrawal from Afghanistan. According to her, it’s been a tough process to get Afghans out of the country since Trump was in office. The senator called in from Honolulu.

“Let’s be clear, though, that there are a lot of Afghans who were applying for the special immigrant visas, and the Trump Administration slow walked these visas to the point where it was not even happening,” Hirono said. “So the development of a lot of our Afghan partners and their families who are not able to get out is not something that just happened overnight. This is a situation that was very much on, in my view, the Trump administration.”

In February of 2020, the former president had set the withdrawal date for May 1, 2021. It was a deal he’d struck with Taliban insurgents at the time.

“But we’re going to move forward and do everything we can to get all of these people out in the coming months and however long it’s going to take with partners across the world,” Hirono said.

General Kenneth McKenzie confirmed Monday that over 123,000 civilians had been successfully evacuated.

After her segment on CNN, Hirono tweeted her gratitude for the U.S. military’s efforts in securing the airfield to allow all the evacuations. “Our military deserves our gratitude for their tremendous effort in evacuating more than 122,000 people from Afghanistan in just a few weeks,” she tweeted. “After the deadline, we need to use diplomatic, economic and other means to evacuate remaining U.S. citizens, Afghan partners, and others.”

The last member of the military was reportedly already left Afghanistan Monday.