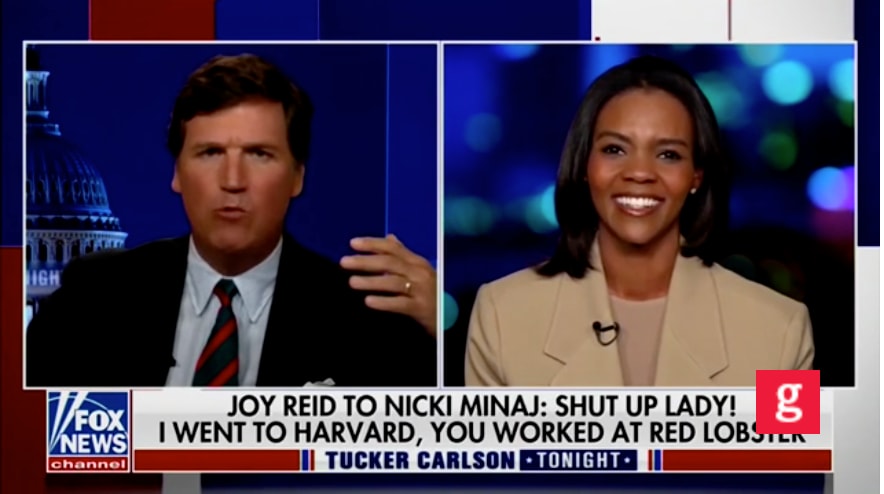 Candace Owens appeared on Tucker Carlson’s show Tuesday to vouch for rapper Nicki Minaj for standing up to vaccine mandates. Minaj did not attend the Met Gala on Monday. Many speculated it was because the Met required vaccinations from all attendees. She has yet to receive her the vaccine, saying she would like to do more research first.

First, Minaj tweeted that a friend of hers became impotent as a result of getting the vaccine. Many interpreted the tweet to be the reason that she hasn’t been vaccinated. But she meant it as a cautionary tale, tweeting: “pray on it and make sure you’re comfortable with your decision, not bullied.”

As a result, many news organizations reported on her absence at the Met Gala. Many headlines pinned it on her vaccination status. However Minaj clarified that she is not traveling while she has her young child at home. Her child is too young to receive either vaccine.

Candace Owens blasted the left media for denigrating her decision to evaluate risks of vaccination. “Now, people are seeing in real-time what these elitists actually think of them,” Owens said. “They spoke down to her, she is stupid, the headlines are insane. She is so dumb, she thinks it’s going to make your testicles fall off, whatever they said. Complete lies, by the way.”

Yet it was a blessing in disguise according to Owens, because the left revealed their true colors. “At the end of the day what they actually think, the Democrats, is that these people are stupid,” Owens said. “They like to come around every four years for the votes, but at the end of the day, they think Nicki Minaj and all rappers are very stupid. And Nicki Minaj right now is proving them otherwise. She is not afraid.”

Meanwhile, Minaj admits she will likely get the vaccine in the near future.

I don't necessarily endorse all content from this site but it's always good to get different perspectives. https://saraacarter.com/candace-owens-the-left-thinks-nicki-minaj-and-all-rappers-are-very-stupid/