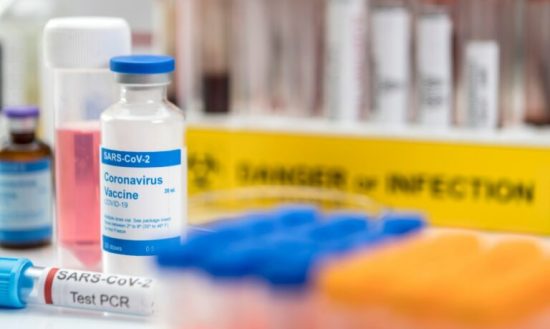 If the Covid vaccines work, why are highly vaccinated countries like Israel and the United Kingdom seeing spikes in caseloads?

These questions are separate from the issue of whether vaccines should be mandated or their side effects. No serious person thinks masks protect their wearers, for example, but we mandated those for more than a year.

But as we enter an ugly new phase in the vaccine debate, I want to offer a theoretical framework to help think about the data we’re seeing – and to explain why these questions would be hard to answer even if the public health authorities were being honest.

To be clear, I’m focusing on the vaccines used in Western countries, especially the Pfizer and Moderna mRNA vaccines, which are now essentially the only vaccines used in the United States. (The AstraZeneca DNA/AAV vaccine is still widely used in Europe.)

Also to be clear, in this piece, I am not discussing how the vaccines work at the cellular level. Instead I’m looking at the population-level data we are now seeing – how many people are being infected with or dying from Covid.

It’s crucial to remember that “work” is a highly elastic term. The spectrum runs from:

1) Vaccines end disease in essentially everyone, essentially forever. (This wouldn’t be impossible; it is true for some other vaccines.)

2) Vaccines do not eliminate all cases, but they work very well, especially against severe disease or death.

5) Vaccines are essentially ineffective, especially in the people high risk of death from Covid.

We can probably eliminate theories 1 and 6 off the top. The clinical trials that Pfizer and Moderna ran last year didn’t show a 100 percent reduction in Covid cases. They also showed no evidence of what’s called antibody-dependent enhancement, that they would cause people to create antibodies that actually helped the virus attack our cells.

The trials did seem to show very sharp reductions in Covid infections, on the order of 95 percent. And no one in the trials died from Covid. This led vaccine proponents to claim that the shots might eliminate nearly all coronavirus deaths – theory 2. 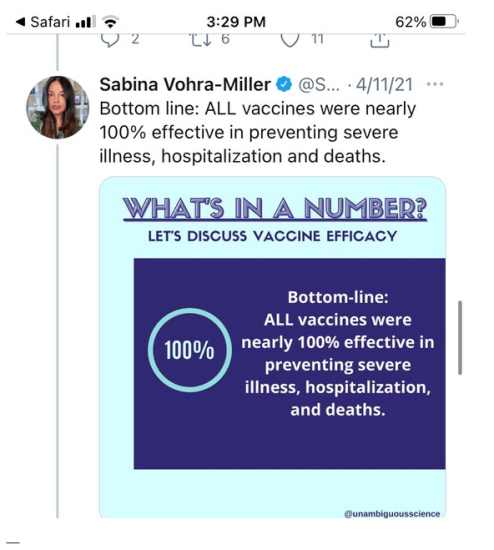 As I explained in my Unreported Truths booklet about the vaccines (https://tinyurl.com/pkzrx76n), this view ignored a huge and almost certainly intentional flaw in the trials. They enrolled only a handful of the older people most at risk from Covid.

As a result, very few UNVACCINATED (as well as vaccinated) people developed serious infections in the trials, and only one unvaccinated person out of more than 30,000 in the mRNA trials died of Covid.

This flaw means the trials couldn’t provide definitive evidence on how well the vaccines work against serious cases of Covid. In contrast, the trials for monoclonal antibodies did prove they worked, because the companies that ran those focused on people at high risk.

The trials had at least two other major flaws. They followed most participants for only about two months after the second dose. And when they calculated vaccine efficacy, they ignored cases that occurred just after the first dose was given.

Neither the companies nor anyone else had no way of knowing how well the vaccines would work in a year, much less in five years – or 20 years. They simply did not have any long-term data. How could they? The vaccines hadn’t even existed until months before, and they used technology that had never been approved for any drug or vaccine.

But the political and media to encourage vaccinations was enormous. Public health experts ignored these potential pitfalls. Instead they decided to press vaccinations as quickly as possible on everyone.

During the spring, their gamble appeared to have paid off. In Israel and Britain, the two countries that had the earliest and most aggressive national vaccine campaigns, new infections and deaths dropped sharply.

This success came with an asterisk, in that both countries actually saw sharp increases in deaths in January as they offered first doses to elderly people at high risk from Covid.

The phenomenon of the post-first-dose spike is real, though the media has refused to report on it. A Danish study in March found that nursing home residents had a 40 percent higher chance of getting Covid in the two weeks after being vaccinated. (Link: https://tinyurl.com/3abehm54)

Nonetheless, after the rocky start, British and Israeli cases and deaths dropped dramatically through the spring – especially after people received their second doses.

In the United Kingdom, cases fell about 97 percent. The country had almost as many cases EACH DAY in early January as in all of May. Israel saw a similar trend. And deaths followed cases down.

The drops led to considerable chest-thumping among vaccine advocates and the media. “UK eager for a big reopening thanks to vaccine success,” the Associated Press wrote on May 14.

Unfortunately, the good news didn’t last. At the beginning of June, Covid cases started to rise in both Israel and Britain. And in the last three weeks, cases have soared, rising 15-fold since mid-May in the United Kingdom. 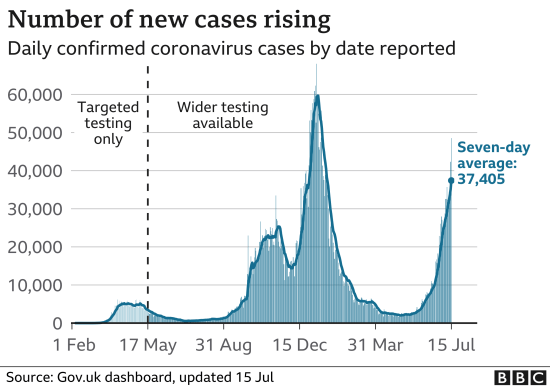 At first, vaccine advocates tried to argue that the rise was mainly happening in unvaccinated people. They now acknowledge that argument is not true. Testing shows that many cases are in vaccinated people (and no country with two-thirds of its adults vaccinated with two doses, like Britain, could have an increase like this unless vaccinated people were also being infected).

Now advocates are trying to minimize the significance of the fact that vaccinated people are becoming infected by arguing that they are not being hospitalized or dying.

That theory is also falling apart. The number of people hospitalized with severe Covid in Israel has more than doubled since late June. And an Israeli government advisor acknowledged July 5 that more than half of serious Covid cases were occurring in “fully vaccinated” people. (https://tinyurl.com/25skj7u9)

Data from England and Scotland show similar trends. In Scotland, hospitalizations have risen more than fivefold in the last several weeks. And more than half the people who died of Covid in the last week of June were fully vaccinated.

We should expect those trends to continue. Serious cases lag positive tests, because most people do not become sick enough to be hospitalized for at least several days after testing positive. Deaths and death reporting lag still further. It would be surprising if deaths did not jump through the rest of July.

Because of the way countries count cases, these figures understate just how bad the vaccine crisis has already become. People are not considered to be “fully vaccinated” until two weeks after they receive their second dose – or a minimum of five to six weeks after the first dose, depending on the vaccine. So many cases in people who have already been vaccinated are lumped into the unvaccinated category.

If the vaccines provided 10 years of 95 percent protection, that delay wouldn’t matter. But if they are losing efficacy within months, the lack of protection they offer at the beginning cuts sharply into their overall value. The total “area under the curve” – the total number of cases from start to finish, from when the vaccines are administered to when they stop working – is what matters.

Public health authorities are also trying to blame the “Delta” variant, which supposedly is more communicable than the original Sars-Cov-2, for the rise in cases. This argument also makes little sense. In India, which was the original home of the Delta variant and where almost no one is vaccinated, cases have fallen 90 percent since early May.

Further, Delta is merely another in a long line of coronavirus variants that public health experts have argued are especially transmissible and/or dangerous. Yet all the variants have only tiny changes from the original Sars-Cov-2, and none has been proven to be more dangerous.

So what do we know now?

The vaccines are failing. The rise in cases is impossible to argue.

The spring drop in cases – in Britain, Israel, and the United States – appears to have come from some combination of a general seasonal decline, preexisting immunity, the end of the post-first-dose spike, and short-term vaccine protection.

Theory #2 above – “Vaccines do not eliminate all cases, but they work very well, especially against severe disease or death” – now appears provably incorrect.

Alongside the data, the fact that Pfizer and Moderna are desperately pressing booster shots offers compelling evidence that the vaccines do not provide long-term protection. If the companies that make the vaccines don’t think they work for more than a few months, why should anyone else?

Boosters are important enough that I will have to return to them in another Substack. But for now simply know that we encourage boosters more than once a decade for only one other vaccine, the flu vaccine. Flu vaccines have far fewer side effects than the Covid vaccines (and are known not to work very well).

Alongside theory #3, we’re left with #4 and #5: “Vaccines work for short periods, but fail quickly” and “Vaccines are essentially ineffective, especially in the people at highest risk of death from Covid.”

At this point, #4 appears to be the most likely. Of course, even if they lose their effectiveness over time, vaccines may offer partial protection and reduce disease severity in some people, which would be a point for case #3.

But they may also fail most quickly in the people who need them the most, a point for theory #5. Scientific papers about the level of antibodies people develop following vaccination provide some evidence for this concern. (Again, the details will have to wait for another Substack.)

I hope it is clear by know that to know for sure just how quickly the vaccines lose their effectiveness will require very careful AND HONEST statistical analysis of complex data.

Instead of offering that, however, American public health authorities are doubling down on their promise of vaccine effectiveness. They trumpet unverified statistics that appear increasingly implausible in the light of the more granular data coming from Israel and especially Britain (which has excellent data from a national health care system and a commitment to publishing weekly reports that cannot be easily manipulated).

For now, the United States has not seen the big increases in cases that have hit Britain and Israel since May. But the mRNA vaccines work the same everywhere. So it is hard to see why America will not, unless natural infection-generated immunity is so much higher here that it blunts the impact of vaccine failure.

Over the next few weeks, the data will bear very close watching. But we already know this much. As public health authorities and the media press vaccinations ever harder on young people – who are at almost no risk from Covid anyway – their unwillingness to face difficult realities will only feed conspiracy theories and resistance.

I don't necessarily endorse all content from this site but it's always good to get different perspectives. https://principia-scientific.com/vaccines-reasons-for-concern-part-3/