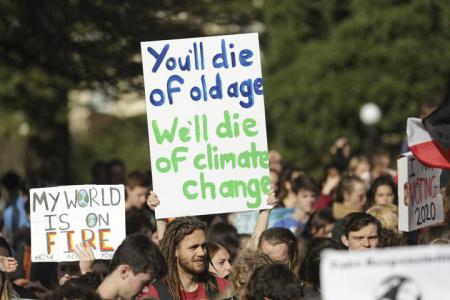 “Code red for humanity.” That’s the headline accompanying the latest report from the intergovernmental panel on climate change.

The IPCC, an arm of the UN, is assuring us that climate change catastrophe is just around the corner, and that if we don’t all abandon our beef burgers and put on our peace sandals straight away, the Earth will be engulfed in a ball of fire by the end of next week.

On the face of it, this is a very worrying thing for a UN body to say and we should all pay a great deal of attention to it.

In reality, no one does. It will dominate the news cycle for a day or two and then we will all move onto something else.

Why is that? Is it because nobody cares about the planet and we’re all fine with seeing humanity melted into a burning pool of effluent?

Of course not. It’s because we have heard it all before.

Reports like this one have lost all credibility with the public – and especially with young people like me.

We have been told so many times that the end of the world is imminent and that we only have 12 years, 10 years, five years to turn the tide on climate change that it now sounds like a broken record.

The problem is this kind of dramatism isn’t founded in science. Bodies like the IPCC consistently conflate things we are very sure of, like the fact that humans are warming the planet, with other things where the science is muddied and there is plenty of uncertainty, like the idea that there will be a two-meter rise in sea level by 2034.

The result is that it is hard to take these reports seriously, but this kind of alarmism isn’t neutral. We can’t all laugh it off and move on.

It is actively harmful because it undermines genuine efforts to combat climate change and it plays into destructive narratives which reduce the poor’s quality of life and fuel inequality.

The people pushing the alarmism know full well that it will hit the poor harder than anyone else.

It’s all very well shaming people for eating meat, but vegan products like tofu and almond milk are still expensive and inaccessible and we’re a very long way away from lab-grown meat being an affordable meat replacement.

In a select committee appearance on climate change, Sir David Attenborough said boldly that the prices of flights should go up to deter air travel.

But won’t that hit poorer families hardest, while wealthy people like Attenborough himself can continue jetting around the world to their heart’s content?

“I’m afraid that is the case,” replied Sir David.

Feeling that you are doing your bit to save the planet is a luxury not everyone can afford, and headline-chasing climate alarmism shouting about how ‘the end is nigh’ only entrenches and exacerbates inequalities, not to mention ruining climate policy discourse.

It’s time for the UN to step back and allow for a more level-headed approach to climate change.

PSI editor’s note: PSI does not accept humans are warming the planet. We believe that to be a lie.

I don't necessarily endorse all content from this site but it's always good to get different perspectives. https://principia-scientific.com/un-climate-report-conflates-science-with-politics-again/