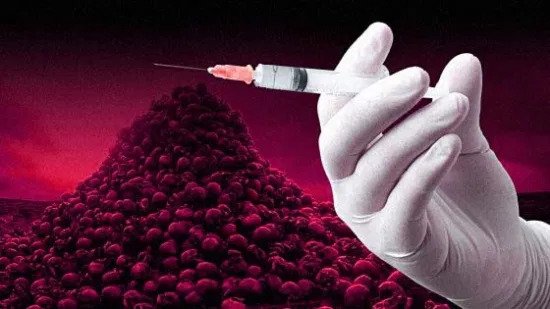 Well that estimation can now be confirmed thanks to personal testimony from people who responded to a tweet from employment law experts PJH Law who; after receiving reports, asked people to email information on intimidation in hospitals, and Yellow Card reports being filled out that vanish by the end of the day and are not logged with the MHRA.

These are just some of the responses received – 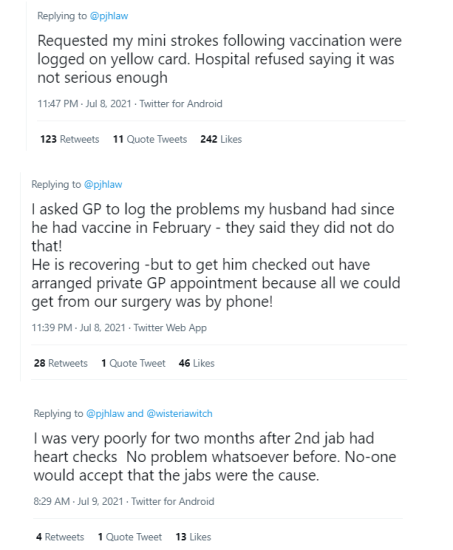 This is what we found…

Up to 30 June 2021, the MHRA had received Yellow Card reports of 399 cases of major thromboembolic events (blood clots) with concurrent thrombocytopenia (low platelet counts) in the UK following vaccination with COVID-19 Vaccine AstraZeneca. Thirty six of the 399 reports have been reported after a second dose. Of the 399 reports, 207 occurred in women, and 189 occurred in men aged from 18 to 93 years. The overall case fatality rate was 18% with 71 deaths, five of which occurred after the second dose. 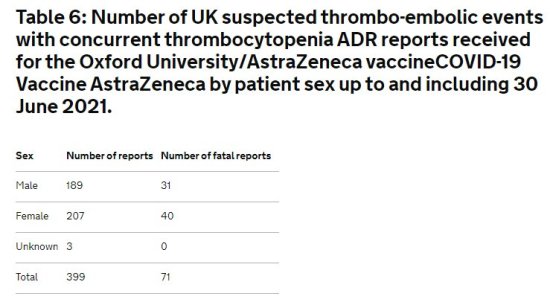 Considering the average age of the person suffering from these events is 46 and 52, you have to wonder why the JCVI and MHRA only advised that under 30’s should be offered the option of a different vaccine?

But whilst the AstraZeneca jab has had terrible press, it has meant nobody has bothered to look at the serious consequences of having the experimental Pfizer mRNA vaccine. The numbers do show that the AstraZeneca jab is an extremely serious cause for concern, but that doesn’t mean the Pfizer jab should be let off the hook.

Are you aware the MHRA have now added a warning to the product information of the Pfizer and Moderna mRNA jabs in respect of inflammation of the heart? This is the latest statement from the MHRA on the subject –

The MHRA has undertaken a thorough review of both UK and international reports of myocarditis and pericarditis following vaccination against COVID-19. There has been a recent increase in reporting of these events in particular with the Pfizer/BioNTech and Moderna vaccines, with a consistent pattern of cases occurring more frequently in young males and shortly after the second dose of the vaccines. These reports are extremely rare, and the events are typically mild with individuals usually recovering within a short time with standard treatment and rest. People should come forward for their first and second vaccination when invited to do so, unless advised otherwise.

These reports have also been analysed by the Government’s independent advisory body, the Commission on Human Medicines (CHM) and its COVID-19 Vaccines Benefit Risk Expert Working Group. Following their advice, the product information for the Moderna and Pfizer/BioNTech vaccines have been updated to inform of these cases and advise healthcare professionals and patients to be aware of important symptoms for myocarditis and pericarditis.

You’ll have noticed the MHRA attempted to down play the adverse reaction affecting the heart as “typically mild”. You cannot have a mild case of myocarditis, you only get one heart, you cannot grow a new one, and if it stops working then we’re afraid that means your time is up.

See also  Australian Girl Describes Being Sent to COVID Detention Facility: ‘We’ve Just Been Told From Higher Up Where to Take You’
Powered by Inline Related Posts

Young men do not even suffer serious disease due to the alleged Covid-19 virus; let alone die. They should avoid the Covid-19 vaccines at all costs.

There have also been 6,310 reports of Lymphadenopathy as an adverse reaction to the pfizer mRNA jab. This is a condition that results in a terrible skin rash, unexplained weight loss, an enlarged spleen (the organ that filters the blood) and fever and night sweats. Doesn’t this sound worse than the alleged disease it is supposed to protect against? 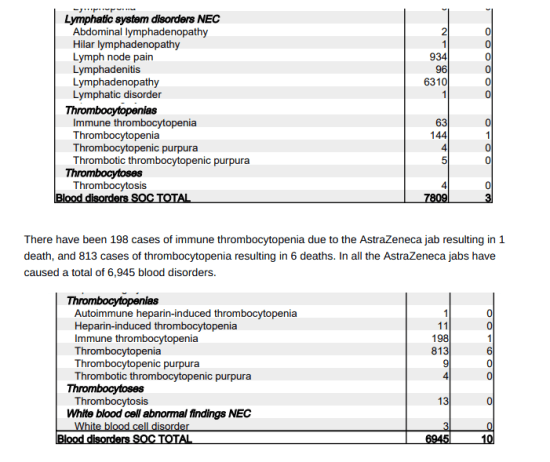 Next up is cardiac disorders, of which the Pfizer jab has caused 3,158 resulting in 77 deaths. 29 of these deaths occurred due to the 77 cases of cardiac arrest reported as adverse reactions to the Pfizer jab. But there is also another condition with concerning numbers – Tachycardia.

Tachycardia is an extremely high heart rate that occurs without explanation. This is the NHS advice on tachycardia –

Call your doctor if you experience unexplained tachycardia, not the normal increase in heart rate after exercise. This is especially important if you also have palpitations, dizziness, light-headedness, fainting spells, fatigue, breathlessness or chest pain.

There have been 530 cases of tachycardia reported to the MHRA due to the Pfizer jab as of the 30th June 2021. 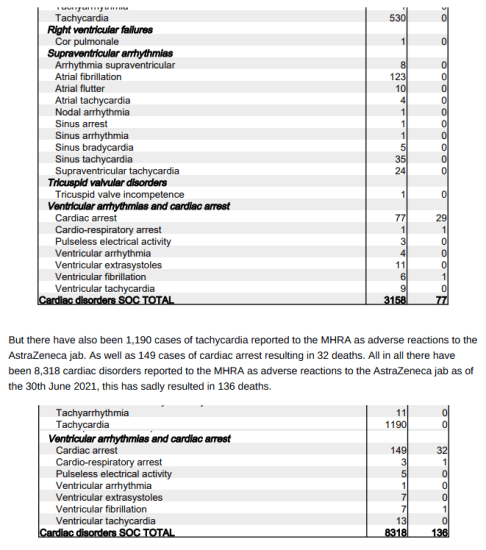 As of June 30th there have been 140 reports of people going deaf as a result of the Pfizer / BioNTech mRNA gene therapy, this is a 180 percent increase on the number reported as of the 5th April 2021. 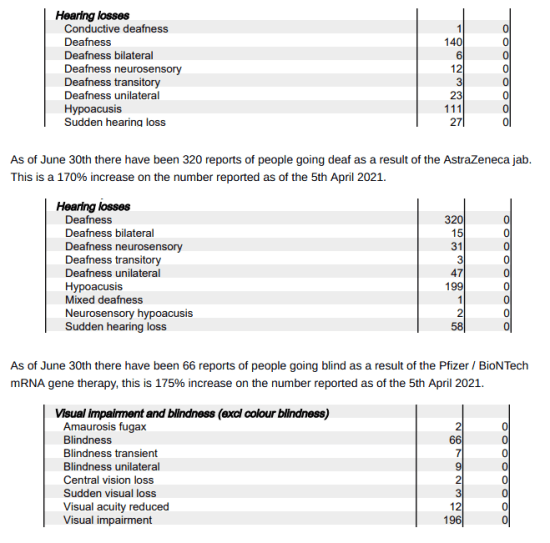 As of June 30th there have been 253 reports of people going blind as a result of the AstraZeneca jab. This is a 188 percent increase on the number reported as of the 5th April 2021.

Can you imagine naively obeying the UK Governments ridiculous laws for the past year and not seeing your grandchild because they said “it’s not safe”?

Then falling for the coercion to take an experimental jab to protect you against an alleged disease which statistically kills just 0.2 percent of those it infects, and ending up not being able to see your grand child’s face or anything else ever again?

Imagine it, because this has happened and is happening to people.

The authorities are constantly attempting to downplay the adverse reactions to the jabs, claiming that it is hard to prove that the jab is to blame – so therefore they’re not blaming it. But how can they deny that someone suddenly dying straight after having one of the Covid vaccines is the fault of the Covid vaccines. Because this has been happening.

There have been 23 reports made to the MHRA Yellow Card scheme up to the 5th April 2021 of sudden death occurring after receiving the Pfizer jab. There have also been 130 reports of death and 1 report of clinical death. 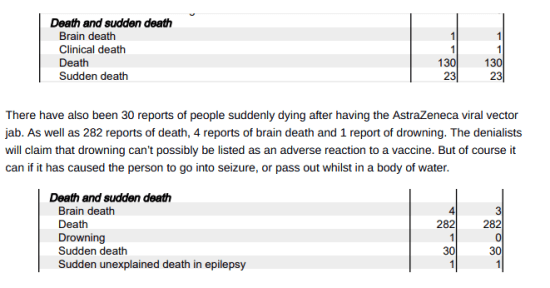 The next adverse reaction goes someway to explaining why we’re seeing reports of people going deaf and blind. It is an extremely concerning adverse reaction with the numbers increasing week on week at a significant rate. It also explains why there has been a significant increase in the number of adverts on the television and radio due to the condition – Strokes.

The Pfizer jab has caused several different types of stroke both due to blood clots and burst arteries. The most common being a cerebrovascular accident, of which there have been 274 reports, sadly resulting in 12 deaths as of the 30th June 2021. 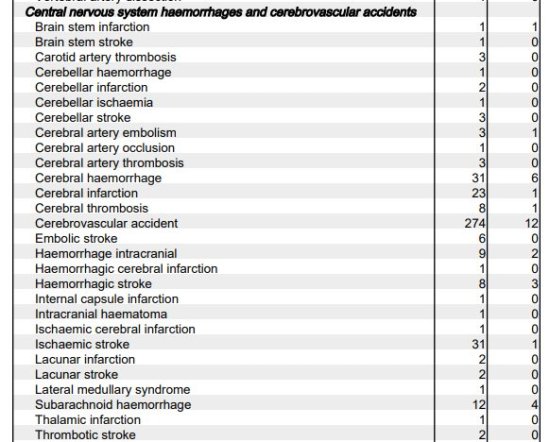 The AstraZeneca jab unfortunately fares much worse in this department, but that does not mean the Pfizer jab should be let off the hook.

Dozens of different types of stroke have occurred due to the AstraZeneca jab, with many of these only being reported in the last few weeks. 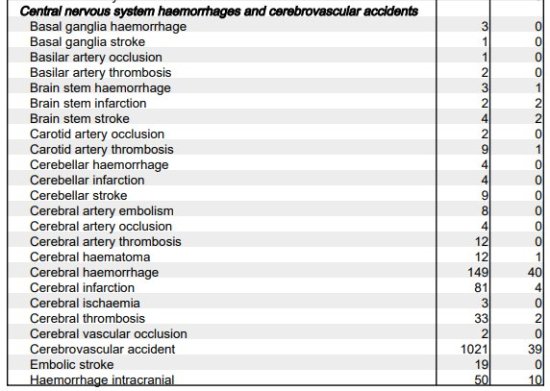 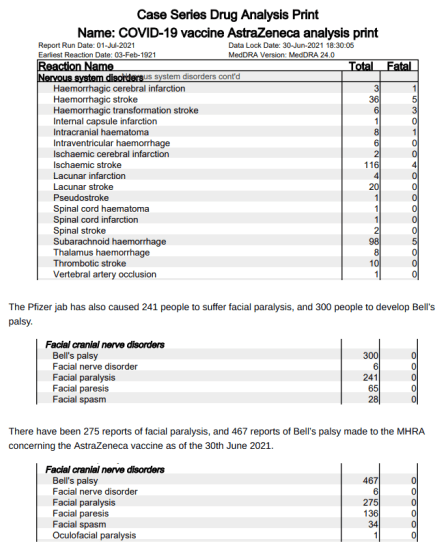 The Pfizer mRNA jab has caused 349 people to go into seizure, luckily this hasn’t resulted in any deaths. 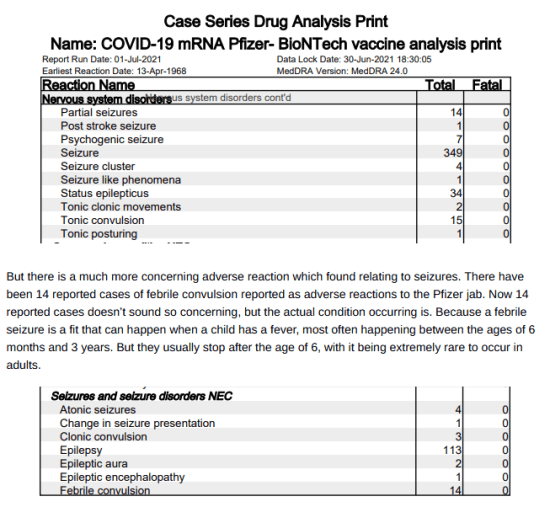 Now we know that children are not being vaccinated, nor should they be due to the extremely low risk of them suffering serious disease if contacting the alleged Covid-19. So it’s extremely concerning to find that there have been a total of 93 reported cases of febrile convulsion occurring after having the AstraZeneca vaccine. Which also proves causation due to the rarity of it occurring in adults

Unfortunately the AstraZeneca jab has also caused 2 deaths out of the 1,177 seizures that have been reported as adverse reactions to it to the MHRA. 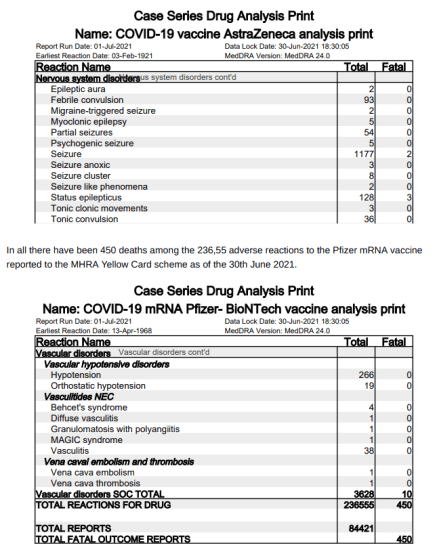 The AstraZeneca jab has had 960 deaths among 775,940 adverse reactions reported to the MHRA Yellow Card scheme as of the 30th June 2021. 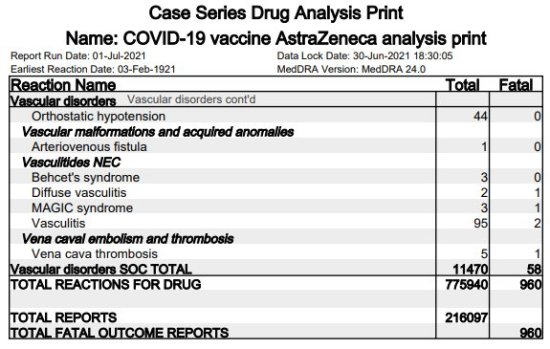 This means that as of 30th June 2021 the Covid-19 vaccines have caused 1,037,376 adverse reactions and 1,440 deaths, and now they’re coming for your children and want to give booster jabs to the elderly and vulnerable in Autumn.

Will this madness ever end?

Please share this information everywhere, the only way to stop more deaths and serious debilitating conditions from occurring is by making a noise. We’ve done the hard work for you, it’s now on you to do something about it.