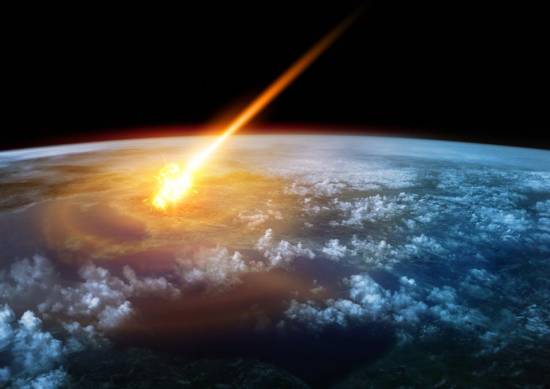 Locals felt their skin burning from forty miles away. Windows shattered within a hundred-mile radius. It was an event that shook Siberia and left roughly 80 million trees completely flattened. Something, with the destructive force of over a thousand Hiroshima explosions, exploded in Siberia in 1908. The problem is that no one knows what it was.

Whatever happened over the Tunguska River was seen, heard, or felt by thousands of people. Although several theories have been brought forward to explain it, the Tunguska event remains a mystery over a hundred years later.

According to many reports that would eventually be collected, on the morning of June 30th, 1908, a blueish-white light lit up the entire sky. The Evenki native people, who lived in the hills just beyond the Tunguska River, watched as a streak of colored light shot across the sky on a trajectory of impact. After about ten minutes of watching the light, there was a bright flash and a thunderous explosion that literally knocked them off their feet. 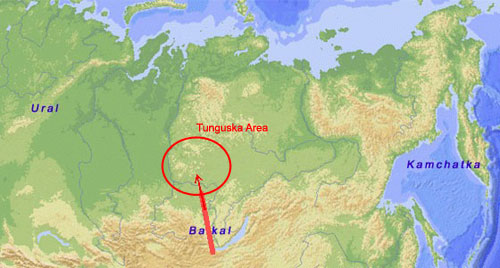 The region around Tunguska.

Astoundingly, shockwaves from the event were reported to have even stretched as far as the U.K and even Washington D.C. in the United States. For many days after, the skies over Europe and Asia burned bright, some people claiming to be able to read the newspaper at night.

In California, the Mount Wilson Observatory noted that atmospheric transparency was very low for months, with an unusual amount of dust particles filling the air.

Whatever had happened in Siberia was more powerful than anyone could have imagined. But what exactly was it that exploded over Tunguska?

Many newspapers worldwide reported on the event but could only speculate about what it could have been. The region contained extremely rough terrain and was inaccessible to most within Russia. The country’s political situation also made it close to impossible for scientists to investigate the aftermath.

It wouldn’t be until the 1920’s that a thorough analysis of the area would be undertaken. Leonid Kulik, the chief curator of the meteorite collection at the St. Petersburg Museum, would eventually lead an expedition to investigate. But harsh weather conditions would delay his expedition until 1927, almost twenty years after the incident. 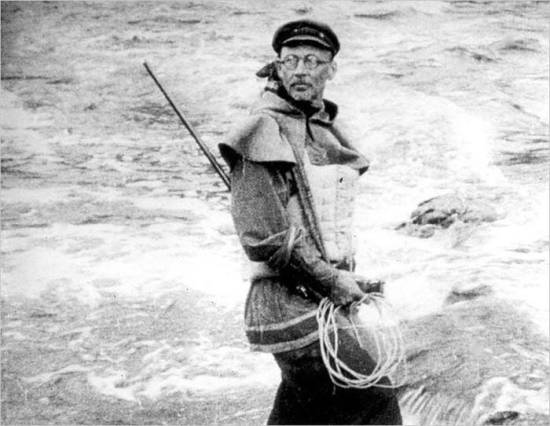 Kulik and his team would discover over 800 square miles of devastated forest and trees pressed to the ground in a radial pattern. 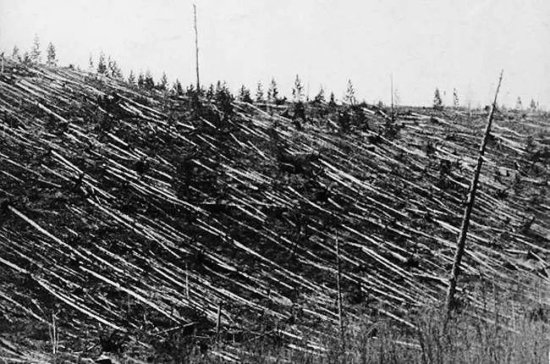 Kulik would follow the radial pattern inward of the Tunguska forest to what they assumed would be an impact site in the center. But curiously, no impact crater or material from a meteor could be found. 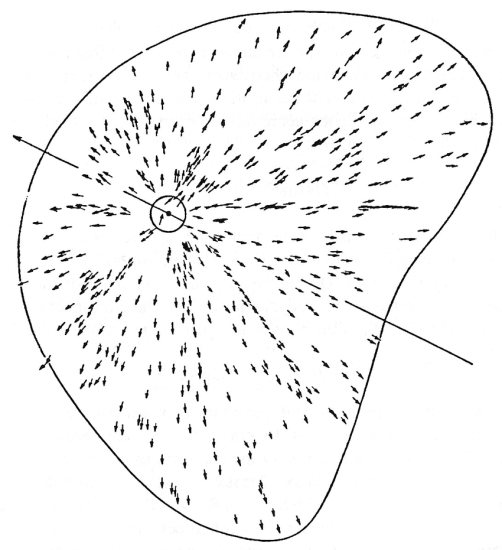 The pattern of felled trees. The arrow points north and the object came in at a shallow angle from the north. The circle marks the point of explosion. Image: Soviet Academy of Sciences

In the Fall of 1927, Kulik published a preliminary report, theorizing that it could have possibly have been an iron meteorite that had actually exploded in the atmosphere, which would account for the early reports of a bright flash in the sky and a thunderous explosion.

Ground zero was a large area of very marshy ground, and Kulik’s team attempted to drain it looking for meteor fragments, but found nothing. 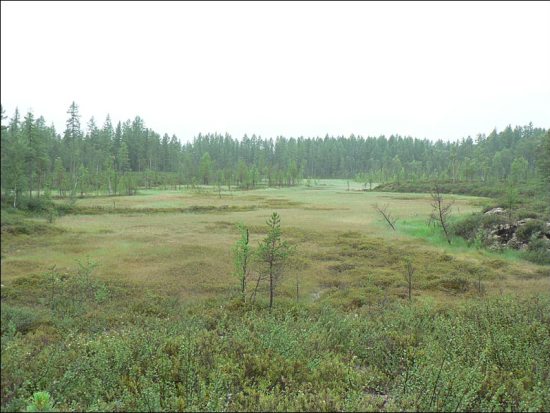 The epicentre of the Tunguska event. Image: Atlas Obscura

It also would explain why no meteorite was found on the ground. But many questioned how no physical evidence of a meteorite could not have been found, even if it had exploded in mid-air. Kulik’s findings were challenged in 1934 by Soviet astronomers who proposed that a giant comet was the cause. Considering that comets are mostly made up of ice, it might have been completely vaporized by the impact, leaving absolutely no trace behind.

While many who have looked into the Tunguska incident tend to believe something came from above to cause the devastation, one individual theorized that perhaps it came from below.

In a paper published in 2003 in the Chinese Journal of Astronomy and Astrophysics, German Astrophysicist Wolfgang Kundt suggested that the cause of the explosion was an eruption of gas from a volcanic rock known as kimberlite.

In the paper, he stated, “It would have come from the molten earth, some 3,000 kilometers deep (1,864 miles). The natural gas would be stored as a fluid that deep, and when it reaches the surface, it would become a gas and expand by a factor of a thousand in volume, for a huge explosion.”

Kundt supports his theory by observing how the trees fell in the radial pattern and several other chemical anomalies that earlier expeditions had discovered at the site.

Another highly speculative theory suggested that this was the aftermath of a mad scientist’s invention of a “death ray.” Nikola Tesla had supposedly been attempting to create a machine that would achieve the wireless transformation of energy over vast distances. He believed this could be used to defend against any attacks during wartime.

While testing this “death ray” one night in 1908, Tesla alegedly aimed it towards the Arctic and turned it on. He then eagerly awaited any news about destruction in the Arctic. But all he could find were newswires stating that something unexplainable exploded in the Tunguska forest, destroying miles of land and injuring locals.

Thankful that nobody had died at the hands of his “death ray,” he soon dismantled the war machine and destroyed it. While this story is ridiculous, it does add to the enigmatic lore of Nikola Tesla and his strange creations.

Returning to the skies, more sensational explanations have come forward as well. Aleksander Kasantsews, an engineer and science fiction writer, proposed that the powerful explosion was caused by an extraterrestrial craft that had crashed in the forest. He also said it might have been an interplanetary weapon that was detonated and caused a nuclear explosion. But it doesn’t stop there.

Dating back to 1973, another highly speculative explanation came in a paper published in the Nature journal. American scientists Albert Jackson and Michael Ryan stated that perhaps a small black hole had collided with earth, causing an antimatter explosion in the atmosphere.

They also stated in the paper, “Since the black hole would leave no crater or material residue, it explains the mystery of the Tunguska event. It would enter the earth, and the rigidity of the rock would allow no underground shock wave. Because of its high velocity and because it loses only a fraction of its energy in passing through the earth, the black hole should very nearly follow a straight line through the earth, entering at 30 degrees to the horizon and leaving through the North Atlantic.”

Perhaps the most recent development in the entire Tunguska affair came in the form of an official document obtained by John Greenewald Jr. of The Black Vault website. According to the document, a 1960s era investigation by the Soviet Union posed the possibility of a UFO crash being the cause of the destructive event.

It traces a history of UFO reports throughout Russia and argues that the Tunguska object, whatever it was, “carried out a maneuver as it was falling down from the sky.” The majority of this document was solely the personal opinions of its original author but was interesting enough to have been filed deep in the recesses of a CIA file cabinet.

While many of the more sensational explanations for the Tunguska event are interesting, if totally implausible, the most widely accepted explanation is that a celestial body, such as a comet or meteor, had entered the atmosphere. That being said, no definitive explanation has satisfied the majority of the scientific community, leaving the Tunguska event a mystery.

Whether or not something anomalous truly happened, it has kept locals and scholars alike looking up, somewhere in the Siberian skies.

I don't necessarily endorse all content from this site but it's always good to get different perspectives. https://principia-scientific.com/remembering-tunguska-still-baffling-over-a-century-later/