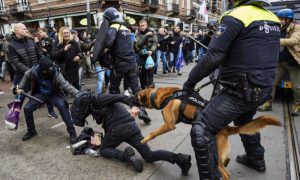 AMSTERDAM, NETHERLANDS – JANUARY 02: Clashes erupt between police anti-riot officers and antivaxxers affiliated to far-right parties near Museumplein on January 2, 2022 in Amsterdam, Netherlands. With riot police expected to be on strike, authorities hav banned the Covid-19 lockdown protest in the Dutch capital. The postponed police protest is part of a series of strikes by police union members to draw attention to police capacity problems and conditions of work. (Photo by Pierre Crom/Getty Images)