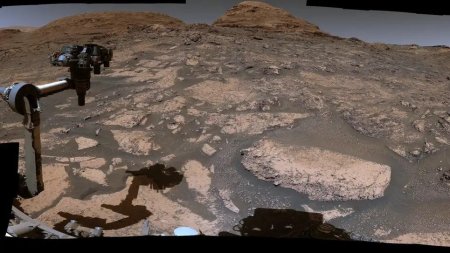 It may be a while before you can jump on a rocket to the Red Planet, but you can check out the view in the meantime.

Just because you can’t catch a shuttle to Mars quite yet doesn’t mean you can’t still tour the Red Planet. This week, NASA released a video showcasing a panoramic tour of the planet’s surface using images snapped by its Curiosity rover, which celebrates its ninth year on Mars this month.

The rover captured the 360-degree view on July 3 near “Rafael Navarro Mountain,” a hill NASA has nicknamed after an astrobiologist who worked on the mission and passed away in January. The panorama is made up of 129 individual images stitched together, and its colors have been white-balanced to replicate how Mars would appear under the kind of daylight we’re used to here on Earth, NASA said in a press release. You can check out the video tour below:

The rover has been puttering about the Gale Crater, a 96-mile-wide (154-kilometer-wide) basin on Mars, since first landing there in 2012. Around this time of year, the planet’s winter, the signature red haze of dust surrounding Mars has cleared up a bit, giving Curiosity a clear view of the crater’s floor and the 16 miles (25.7 kilometers) it has traveled over the course of its mission.

These snapshots also provide some interesting insights into how the planet’s environment has evolved over millions of years. The region that Curiosity previously explored was dominated by clay-rich rocks that formed in lakes, but now it’s finding rocks filled with salty minerals called sulfates.

“The rocks here will begin to tell us how this once-wet planet changed into the dry Mars of today, and how long habitable environments persisted even after that happened,” said Abigail Fraeman, Curiosity’s deputy project scientist at NASA’s Jet Propulsion Laboratory.

It’s within this ancient Martian environment that scientists believe life may have existed on the planet, which is why Curiosity and NASA’s other Mars rover, Perseverance, are combing the area for clues. Over the next year, NASA said Curiosity will venture past Rafael Navarro Mountain and another mountain that’s taller than a four-story building. After that, it will enter a narrow canyon before revisiting a slope with a sandstone cap nicknamed “Greenheugh Pediment” that it previously summited in 2020.

UNEP Claims World’s Most Urgent Problem Is Meat. Not Even Close
7000 Doctors and Scientists Accuse COVID Policy-Makers of ‘Crimes Against Humanity’
‘Microfliers’ could carry sensors to monitor air pollution and more

I don't necessarily endorse all content from this site but it's always good to get different perspectives. https://principia-scientific.com/panoramic-video-tour-of-mars-with-the-curiosity-rover/