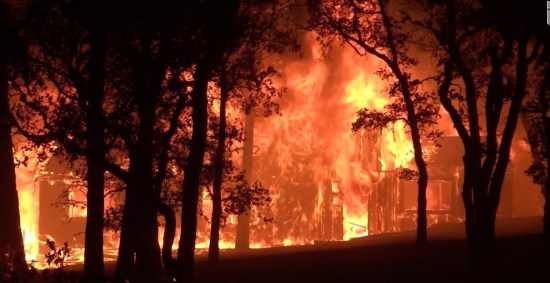 After making the entire U.S. wildfire dataset back to 1926 public for decades, now, in a blatant act of cherry-picking, the National Interagency Fire Center has removed a large portion of it, and only shows data from 1983. You can see it here.

Fortunately, the Internet never forgets, and the entire dataset is preserved on the Internet Wayback Machine.

Data prior to 1983 shows that U.S. wildfires were far worse 100 years ago, both in frequency and total acreage burned, than they are now, 100 years of modest warming later.

By disappearing all data prior to 1983, which just happens to be the lowest point in the dataset for the number of fires, NIFC data now show a positive slope of worsening wildfire aligning with increased global temperature.

This truncated data set is perfect for claiming “climate change is making wildfire worse,” but flawed because it lacks the context of the full data set.

See figure 1 below for a before and after comparison of what the NIFC data looks like when you plot it. 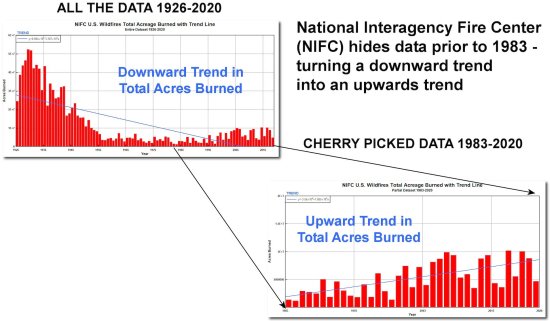 Greg Wrightstone of Inconvenient Facts showed how the same thing was done on page 7 of the 4th National Climate Assessment in 2016, shown below. 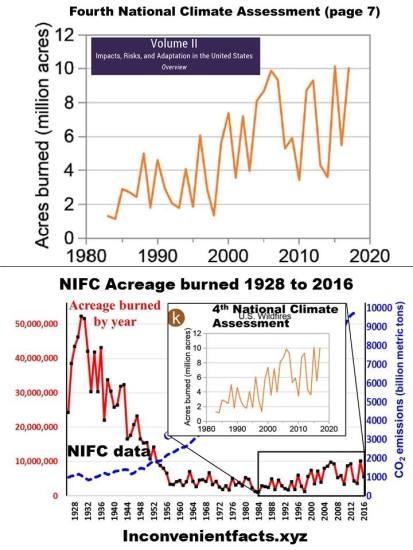 The US Department of Agriculture chart below shows how much worse wildfires were prior to 1983. 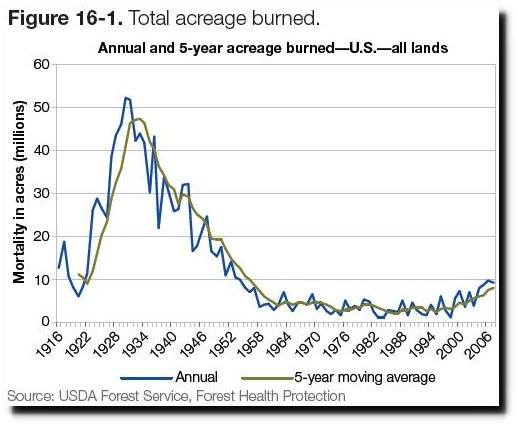 Tony Heller also showed how much less area has burned since 1926. 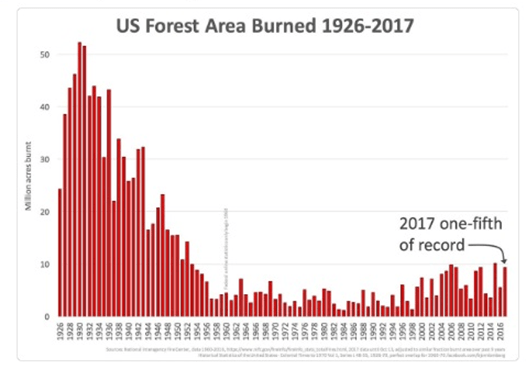 The full NIFC data set shows wildfires were far worse in the past.

In June 2011, when this data was first made publicly available by the NIFC, the agency said,

“Figures prior to 1983 may be revised as NICC verifies historical data.”

In December 2017, I published an article titled: “Is climate change REALLY the culprit causing California’s wildfires?, pointing out the federal government’s own data showed wildfires had declined significantly since the early 1900s, which undermined claims being made by the media that climate change was making wildfires more frequent and severe.

Curiously, between January 14 and March 7 of 2018, shortly after this article appeared, NFIC added a new caveat on its data page stating:

The National Interagency Coordination Center at NIFC compiles annual wildland fire statistics for federal and state agencies. This information is provided through Situation Reports, which have been in use for several decades.

Prior to 1983, sources of these figures are not known, or cannot be confirmed, and were not derived from the current situation reporting process. As a result, the figures prior to 1983 should not be compared to later data.

With the Biden administration now in control of NIFC, the agency now says,

“Prior to 1983, the federal wildland fire agencies did not track official wildfire data using current reporting processes. As a result, there is no official data prior to 1983 posted on this site.”

This attempt to rewrite the official United States fire history for political reasons is both wrong and unscientific.

NFIC never previously expressed concern its historical data might be invalid, or shouldn’t be used.

NFIC’s data has been relied upon by peer-reviewed research papers and news outlets in the United States for decades.

Without this data, there is no scale of the severity of the wildfires or method to compare the number of wildfires in the past with the numbers today.

NFIC’s revision of wildfire history is essentially labeling every firefighter, every fire captain, every forester, and every smoke jumper who has fought wildfires for decades as being untrustworthy in their assessment and measurement of this critical, yet very simple fire data.

The reason for NFIC erasing wildfire data before 1983 is not transparent at all. NFIC cites no study, provides no scientifically sound methodological reason to not trust the historic data that previously the agency publicized and referenced.

Indeed, NFIC provides no rationale at all for removing the historic data justifying any claim that it was flawed or incorrect.

If the fact that scientists or bureaucrats have changed the way they track and calculate data over time legitimately justifies throwing out or dismissing every bit of evidence gathered before contemporary processes were followed, there would be no justification for citing past data on temperatures, floods, droughts, hurricanes or demographics, and economic data.

The way all of these and other “official” records have been recorded has changed dramatically over time.

Even the way basic temperature is recorded is constantly evolving, from changes in where temperatures are recorded to how they have been recorded: from a few land-based measuring stations and ocean-going ship measurements to weather balloons, satellites, and geostationary ocean buoys.

If simply changing the way a class of data is recorded justifies jettisoning all historic datasets, then no one can say with certainty that temperatures have changed over time and a human fingerprint of warming has been detected.

Plotting the entire NIFC dataset (before it was partially disappeared) demonstrates that wildfire and weather patterns have been inextricably linked for decades.

See also  Too Much Coral Is Not Enough, say Alarmists
Powered by Inline Related Posts

Note figure 2 below, combining the number of fires and number of acres burned. See the annotations that I have added. 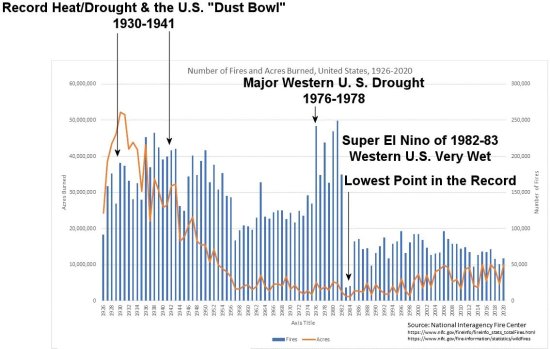 Figure 2: Plot of the entire NIFC wildfire dataset, with acreage burned in amber, and the total number of fires in a given year in blue. Annotations show major weather events in the United States.

The NIFC decision to declare data prior to 1983 “unreliable” and removing it is not just hiding important fire history but cherry-picking a data-starting point that is the lowest in the entire record to ensure that an upwards trend exists from that point.

The definition of cherry-picking is:

Cherry-picking, suppressing evidence, or the fallacy of incomplete evidence is the act of pointing to individual cases or data that seem to confirm a particular position while ignoring a significant portion of related and similar cases or data that may contradict that position.

It seems NIFC has caved to political pressure to disappear inconvenient wildfire data.

This action is unscientific, dishonest, and possibly fraudulent.

NIFC is no longer trustworthy as a source of reliable information on wildfires.