Written by The Daily Skeptic

A major study from the University of Oxford into risks of myocarditis (heart inflammation) following Covid vaccination has found the risk in males under 40 to be significantly higher than from the virus itself. 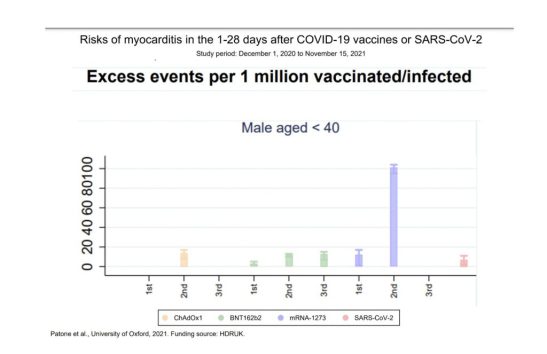 These findings are depicted above.

Most of these figures represent a doubling of the risk compared with infection.

However, the Moderna second dose figure is a massive 14.4 times greater.

The Moderna vaccine uses a similar mRNA technology to the Pfizer vaccine, but delivers a dose three times as large, which may partly explain the difference.

For females and for males over 40 the study found greater risk of myocarditis following infection than following vaccination.

However, some have criticised the study for under-counting Covid infections by using positive tests rather than antibody surveys, which means the risk following infection may be exaggerated.

Another criticism was the use of only two age bands – above and below 40 years – which may conceal elevated risks for younger age groups.

The study, which is a pre-print, is an update to an earlier study published in Nature earlier in December which used data up to August 24th.

The update brings us up to November 15th, extends the age range down to 13 years from 16 years, and also includes results split by both sex and age (rather than just by sex and age separately) – the original study was especially criticised for omitting this breakdown, leading to allegations of concealing important findings for political purposes.

The authors note: “These findings have important implications for public health and vaccination policy.”

In particular, given the low risk of Covid to males under 40, the extreme elevated risk of myocarditis from the Moderna vaccine means it ought to be suspended for use in males under 40 with immediate effect.