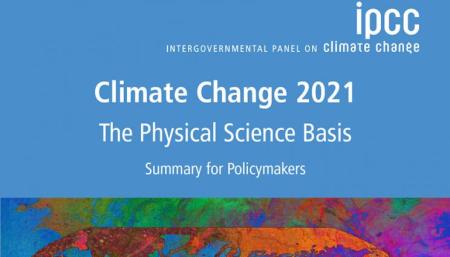 The official press release to accompany the IPCC’s sxith Assessment Report Summary For Policymakers calls it ‘code red for humanity’, but what the report actually says is, as usual, somewhat different.

The doomers and alarmists have greeted this report with glee, while skeptics have greeted it with derision, and well they should. Let’s take a look at some of the ‘facts’ presented.

This paragraph from the report shows how little the IPCC seems to understand atmospheric physics:

So the climate models are now so accurate we can confidently predict 2000 years into the future? Pull the other one, its got bells on it.

AR6 says: “Globally averaged precipitation over land has likely increased since 1950, with a faster rate of increase since the 1980s (medium confidence)”

Translation: it is possible, but we are not sure, that the world is experiencing higher rainfall.

Much of the media has taken this to mean that the German floods were caused by AGW, but the report does NOT say that.

In chapter 2 the report states:  “..the total number of extratropical cyclones has likely increased since the 1980s in the NH (low confidence), but with fewer deep cyclones, particularly in summer. The number of strong extratropical cyclones has likely increased in the southern hemisphere (medium confidence). The extratropical jets and cyclone tracks have likely been shifting poleward in both hemispheres since the 1980s with marked seasonality in trends (medium confidence). There is low confidence in shifting of extratropical jets in the NH during the mid-Holocene and over 950–1400 CE to latitudes that likely were similar to those since 1979.”

Notice the frequent use of the word ‘likely’. In other words, they think there are more storms now, but there is such a small difference they can’t tell.

This is at odds with what Dr Tim Ball told me via email, that in a warmer world, the smaller temperature difference between the poles and the tropics produces less storms not more, so we should treat this IPCC assertion with some skepticism.

The report says: “observed trends during the last century indicate that the GM precipitation decline reported in AR5 has reversed since the 1980s, with a likely increase mainly due to a significant positive trend in the northern hemisphere summer monsoon precipitation (medium confidence). However, global monsoon precipitation has exhibited large multi-decadal variability over the last century, creating low confidence in the existence of centennial-length trends in the instrumental record. Proxy reconstructions show likely northern hemisphere monsoons weakening since the mid-Holocene, with opposite behavior for the southern hemisphere monsoons.”

In other words, monsoons MAY have been getting wetter over the past 40 years, but we don’t really know as they are so variable.

The IPCC produced various scenarios of future temperatures, based on differing amounts of ‘greenhouse gases’. RCP8.5, the highest estimate, meant massive burning of ‘fossil fuels’, many times more than we do now, with no regard for pollution, and by that I mean actual pollution, not carbon dioxide, which is NOT a pollutant. The IPCC themselves regard RCP8.5 as the least likely to happen, but alarmists call it ‘business as usual’, indicating they want you to believe that’s what is happening now.

This AR6 report uses the higher, and least likely figures, in almost half their mentions of future climate scenarios, while the lower figures account for less than a quarter of them.

This shows a clear bias toward alarmism.

On page six of the Summary For Policymakers, it states:

The period 1971 to 2018 is long enough to be climate not just weather, but the NOAA tide gauges do not show such an increase, only satellite data, we are told, shows it.

The tide gauge for Alameda, California shows no increase in the rate of rise:

The tide gauge for The Battery in New York shows no increase in the rate of rise:

The tide gauge for Fernandina Beach in Florida shows no increase in the rate of rise:

North Shields in the UK shows no increase in the rate of rise:

Wismar in Germany shows no increase in the rate of rise:

The Gulf of Mexico tide gauges show a much steeper increase in sea-level rise, but no acceleration, as in this one from Grand Isle, Louisiana:

This difference is of course due to what is known as Isostatic Rebound. The further north you go, the rise in sea levels recorded by tide gauges turns into what appears to be a fall in sea-levels. This is because now the great weight of the glaciers has gone, the land is rising back to where it was before the ice sheets compressed it. At the same time, the same geologic forces are causing the Gulf coast to sink. That is not human-caused, it is natural geology.

To illustrate Isostatic Rebound on the North American continent, here is the tide gauge from Juneau, Alaska:

As Climate Realism recently reported here,, the IPCC’s reported is an error made when two different sets of satellite data sets were combined:

“[t]hetwo most recent satellites record significantly higher rates of sea-level rise than the earlier two satellites. The first two satellites agree quite well, but they both show a much smaller trend than the latter two satellites. Neither set of the satellite record shows any accelerating trend. The UC scientists simply combined the two dissimilar data sets, plotted a new trend showing acceleration, and didn’t mention the difference.”

Therefore, the IPCC claim that sea-level rise is accelerating due to ‘climate change’ IS A LIE.

On page 54, the report descends into fantasyland. It claims if the temperature rises by just 1.5℃ above pre-industrial levels, sea levels WILL rise between six and ten feet within 2,000 years, and up to 20 feet in 10,000 years.

We can now apparently accurately predict 10,000 years into the future….

If sea-levels rose by 20 feet, thay would be about the same as they were during the last interglacial 120,000 years ago, as this chart from the Australian National University shows: 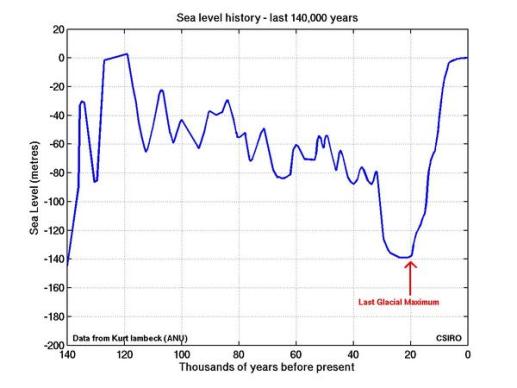 “[i]ncreasing atmospheric carbon dioxide concentrations lead to increasing acidification of the ocean. Projections based on SRES scenarios give reductions in average global surface ocean pH of between 0.14 and 0.35 units over the 21st century, adding to the present decrease of 0.1 units since preindustrial times.”

The report included this chart, which indicates ‘acidity’ starts at a pH of 7.9. THIS IS A LIE.

As I’m sure most readers are already aware, the oceans have a pH of between 7.9 and 8.3, which makes them an alkaline, as shown below:

You cannot increase the acidity of something that is not an acid to start with.

The pH scale, like the Richter Scale for earthquakes, is logarithmic, meaning each number is ten times the previous number. So, to turn the oceans into even the mildest acid at 6.9, the pH level would have to decrease by a factor of 20. That is unlikely in the extreme.

Therefore, the IPCC claim of increasing ocean acidity IS A LIE.

As has been reported on PSI and elsewhere, there are multiple reasons for the apparent increase in floods. More and more people are paving over their gardens to cater for cars, thus allowing fewer places for rainwater to soak into the ground. So-called ‘green’ policies have stopped or severely curtailed proper management of waterways. Houses are now reguilarly built on known flood plains.

Lastly, news of such events that used to take days or weeks to travel around the world before the internet and social media, can now be flashed around the globe within minutes. Yes, floods are increasing, but NOT for the reasons climate alarmists claim.

Other claims are the forests or the ground is so hot now, fires are breaking out spontaneously. The ignition point of healthy wood is 300C. That means either the tree or the ground around it has to be that temperature for a spontaneous fire to break out. Where in the world are those conditions?

Environmental regulations have all but stopped logging, back-burning & brush-clearance, and have caused former logging & access roads, which also served as effective fire-breaks, to either be closed or deliberately blocked. THAT is what creates large forest fires which then cannot be adequately fought.

A study published in 2020 compared 38 CMIP6 computer models. It concluded:

“For lower-troposphere and mid-troposphere layers both globally and in the tropics, all 38 models overpredict warming in every target observational analog, in most cases significantly so, and the average differences between models and observations are statistically significant.”

This illustration, prepared by John Christy of the University of Alabama in Huntsville in 2019, shows just how inaccurate the model;s are, yet alarmists claim they are absolutely accurate: 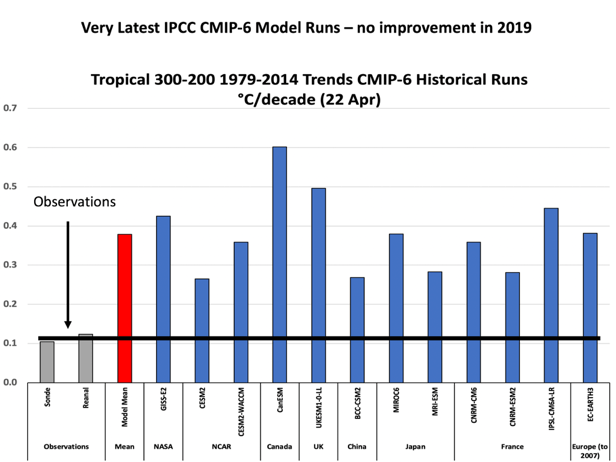 The observations are shown in grey on the left.

“The same Science article that reported the IPCC scientists’ admission that the models run hot also quoted NASA Goddard Institute for Space Studies Director Gavin Schmidt as saying, ‘It’s become clear over the last year or so that we can’t avoid this’ — a slip that suggests that he and others have, contrary to the skepticism inherent in genuine science, been trying to avoid it for a long time.” (Emphasis added)

If in doubt, blame carbon dioxide

Most of this IPCC report is the result of projections, opinions, predictions and computer simulations. Computer models will produce exactly the result they are programmed to. If your model is programmed to show a temperature increase if carbon dioxide increases, that’s exactly what it will show. If you programme your model to show bananas turning blue if the temperature increases more than 1.5C that’s what it will predict.

Computer models are only as good as the assumptions programmed into them. Weather forecasters still cannot predict the weather accurately more than a day or so in advance, yet we are supposed to believe climate predictions decades into the future? To quote a certain sleepy politician; C’mon Man.

The only computer model that matches observations remains the Russian INM CM5, as it has ‘low climate sensitivity’. What does that tell you?

If this IPCC report is ‘code red’ for anything, it is for unprecedented propaganda and outright lies.