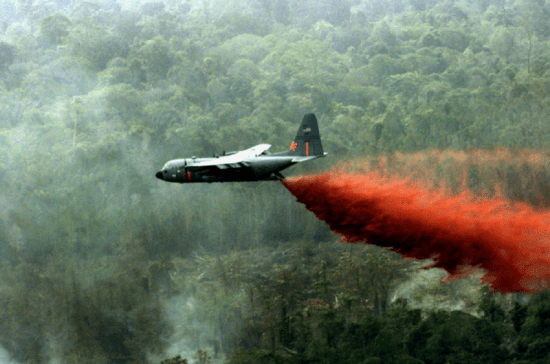 When Carol Van Strum moved to Five Rivers, Oregon, in 1974, she thought she had found the perfect rural idyll. Surrounded by National Forest, her four young children could grow up close to nature. They loved fishing and playing by the river, fascinated by the little ‘dipper’ birds that sat on the rocks.

‘They knew everything that lived down there,’ she recalls. ‘There were beavers and otters in the river, and all the fish and herons and ospreys. So they just were part of that.’

Then one day the children fell sick, choking and gasping.

Down at the river, Carol found a scene of devastation — dead ducklings, crayfish and trout.

The cause seemed fairly obvious: a U.S. Forestry Service helicopter had been flying overhead the day before, spraying something over the land.

Nobody knew what it was but, ‘a lot of people assumed, “Well it’s the government doing it, it must be OK,” ’ says Carol. ‘We called the fire service and they said: “Oh no, it’s perfectly safe.” ’ But it wasn’t.

The chopper was spraying a herbicide known as 2,4,5-T — the highly toxic main ingredient of Agent Orange, the notorious chemical defoliant used to blanket swathes of South-East Asia during the Vietnam War. 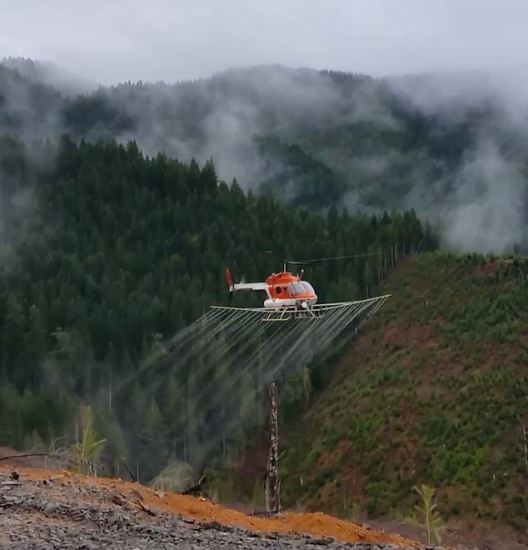 The U.S. military had stopped using it in 1971 because of growing public health concerns — but here it was being used in the U.S.

Agent Orange was the most devastating and enduring blight inflicted on Vietnam during the conflict, believed to have caused death or serious injury to up to a million victims. Its most toxic element, a dioxin known as TCDD, would soon wreak havoc in sleepy Oregon.

The herbicide drifted on to the Van Strums’ land with disastrous effect. The family dog died and so did the garden.

And it wasn’t just the Van Strums who suffered. The miscarriage rate among local women shot up within a month: one would-be mother eventually had 14 miscarriages.

Hunters began to find deformed fish, water fowl and deer. Fawns were born with no eyes, goslings hatched with their feet facing backwards or with only one wing, frogs had six legs.

And, appalling as that sounds, there was a devastating human parallel — successive generations of Vietnamese children were being born with equally horrifying deformities, earning Agent Orange notoriety as the most destructive chemical used in the history of warfare.

The battle waged by Carol and another courageous woman campaigner, French-Vietnamese activist Tran To Nga, against the ‘herbicide from Hell’ and the industrial giants and governments responsible for its manufacture is revealed in a new American documentary, The People Vs. Agent Orange.

America’s mixed feelings about the Vietnam War might help to explain why Oregon’s Agent Orange scandal was never made into a thriller. It is certainly worthy of it, with menacing men in dark suits, phone-tapping, stolen evidence and signs of a monstrous cover-up. 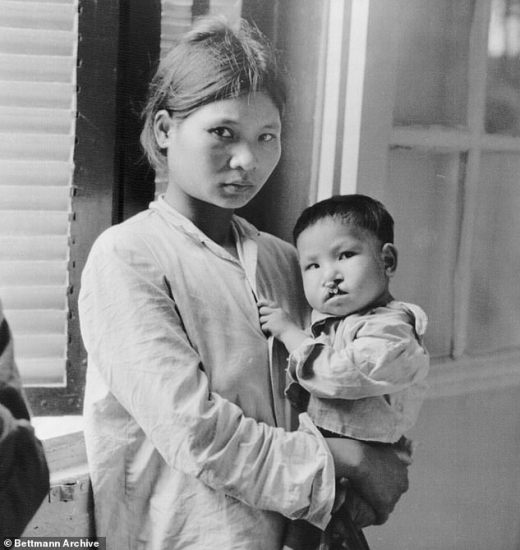 Some believe a tragic fire that destroyed the Van Strums’ home in 1977 and killed all four of their children was an arson attack linked to the spraying protest. Carol, who almost committed suicide that night, still cannot talk about it on camera.

The Agent Orange nightmare began in South Vietnam in the early 1960s, where the U.S. military (copying Britain’s example in the earlier Malayan Emergency) started using the herbicide to destroy the enemy’s crops and remove jungle foliage that the North Vietnamese soldiers used as cover.

The agent, which could reduce huge trees to leafless skeletons, was 50 per cent composed of 2,4,5-T. This in turn contained the devastating dioxin TCDD.

Dioxins persist for a very long time in animals and have been described as ‘wreaking havoc’ on the human genome. They can cause chromosomal mutations leading to deformed babies, lethal cancers and other crippling ailments as traces of poison pass through generations.

A dioxin molecule has a half-life of two billion years, making it about as lethal as the plutonium in nuclear bombs. Environmental protection agencies consider dioxins one of the planet’s most hazardous pollutants.

Some 18 million gallons of the herbicide were sprayed on Vietnam, Laos and Cambodia in America’s Operation Ranch Hand, from 1962 to 1971. It was used heavily around U.S. camps and bases to remove foliage where enemy snipers could hide.

The U.S. companies that made it — principally Dow Chemical and Monsanto — have argued that there is insufficient evidence to prove Agent Orange was responsible for what has been alleged. (Although in 1984, seven chemical companies paid out $180 million — £131 million — to help persuade U.S. veterans to drop claims against them.)

The companies have also claimed they can’t be held responsible for the uses to which Washington put their product.

Their critics — including Dr James Clary, a retired U.S. Air Force scientist who was involved in Operation Ranch Hand — insist that both the U.S. and the chemical companies always knew Agent Orange was ‘extremely harmful’ to people but refused to dilute the dioxin content (the cheaply produced military version had more concentrated dioxin than the expensive civilian one).

The U.S. military stopped dropping Agent Orange on South-East Asia in 1971, under pressure from scientists who disputed the claim that it only damaged plants.

But vast reserves of it, in barrels identified by orange bands around them, remained. 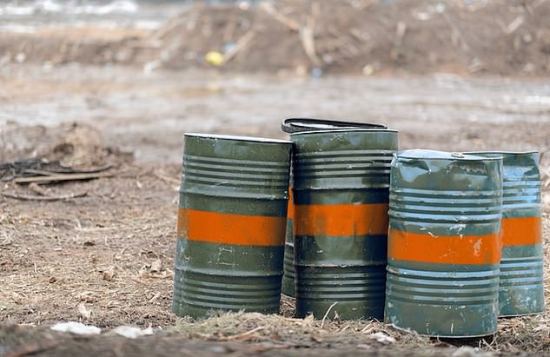 Its use on U.S. forests and land considered ‘remote from sustained human contact’ continued to be allowed.

In the heavily forested hills and mountains of west Oregon, an array of toxic herbicides arrived with perfect bad timing.

The local logging industry used a controversial process called ‘clear-cutting’, in which tracts of forest were cleared of trees so new timber could be grown.

Much of the land wasn’t replanted, and instead turned into vast areas of brushwood. In the early 1970s, a new U.S. law banned clear-cutting unless the land was replanted within three years.

Suddenly, logging companies needed to clear areas of brush very quickly. The chemicals used in Agent Orange must have seemed the perfect solution — until they were washed into the water supply.

Local people soon realised there was something terribly wrong.

A doctor recalls seeing a rise in birth defects, including ultra-rare conditions, such as babies born with parts of their brain and skull missing.

The chemical and logging companies hit back with studies concluding that the chemicals were harmless, dismissing their opponents as tree-hugging zealots. A senior Dow company scientist claimed 2,4,5-T was ‘about as toxic as aspirin’.

Outside the courtroom, their tactics got much dirtier, say the protesters. A health study that an activist had meticulously compiled mysteriously went missing after her home was burgled. When protesters went to deliver evidence to officials in a nearby city, they were ‘followed by a shiny sedan with guys in suits’.

Two men in suits also visited Dr Renee Stringham, who had sounded the alarm about birth defects, saying they wanted to talk about the herbicides: ‘They didn’t really say where they were from. When they said: “Do you know at all times where your children are?”, I realised I didn’t. I said it was time to end the interview, as it was clearly a threat against me and my children.’

A van with tinted windows turned up outside the Van Strums’ house, the men inside it sidling up to the children to ask about the ‘deformed critters’ they kept in the freezer. As the van left, the back door flew open, revealing a bank of video cameras inside.

‘The phone company’s employees told us our phones were being tapped,’ says Carol. Her husband was followed as he drove along deserted country roads.

They never worked out whether it was the government, the loggers or the chemicals companies.

When they won a temporary injunction stopping the spraying of 2,4,5-T, the amateur activists were flooded with appeals for help from people across the U.S. reporting similar issues.

A study in Idaho, for instance, showed that the sperm of men working with herbicides became deformed after the spraying season.

Protesters in other parts of the U.S. even shot at spraying helicopters. The new documentary has footage, secretly shot by one of the pilots as recently as 2015, in which he finishes his shift red-faced and coughing up blood.

On December 31, 1977, Carol arrived home to find her house in flames. Her four children, aged five to 13, perished inside.

Police said the fire was ‘accidental in nature with the actual cause unknown’ but Carol, now 79, insists that firefighters told her it was arson.

‘It’s hard to talk about it. I just can’t, really,’ she says. But she makes clear that she believes her opponents in the spraying row were responsible.

‘They had done absolutely the worst thing anybody could do to me,’ she tells the programme. As her children had also campaigned against spraying, she reasoned, ‘the only thing to do was to keep going for their sake’.

The U.S. government severely restricted the use of 2,4,5-T in 1979, after the Oregon protest, and a few years later firms stopped selling it.

While helicopters no longer clatter overhead spraying 2,4,5-T, they still use the other herbicide in Agent Orange, a chemical called 2,4-D. It doesn’t contain dioxin but its safety is fiercely debated.

U.S. politicians and judges have dragged their feet over making reparations to Vietnam, apparently afraid of opening the floodgates.

Tran To Nga, the documentary’s other warrior mother, would love to change that. Working as a journalist aligned with anti-U.S. forces during the Vietnam War, she remembers Agent Orange as a ‘sticky powder’ that ‘drenched’ her body and made her cough uncontrollably.

She and her friends consumed water and food contaminated by it for months, and its terrible legacy revealed itself when she had her first child, a daughter, in 1968.

Everyone marvelled at the baby’s beauty until, after a few days, her skin ‘started to come off in pieces’.

She developed breathing and heart problems, then died.

Tran’s other two children survived but, like their own children, have suffered from incurable diseases such as blood and pancreatic disorders.

Tran blamed herself for 40 years until she found out Agent Orange had been responsible and that she still has dioxin in her body.

Now 79, she has diabetes, cancer and a rare insulin allergy, all probably caused by the defoliant.

She may not live to fulfil her pledge to appeal against a French court ruling in May that rejected her lawsuit against 14 chemical companies.

Meanwhile, dioxin from Agent Orange is contaminating the environment at scores of sites around the world, from the Netherlands to Japan, where the herbicides were produced, tested, shipped and eventually dumped.

In Britain, campaigners say biodiversity is being damaged by herbicides and insecticides used by farmers. In countries such as Brazil, Argentina and the U.S., there are far less rigorous controls on chemicals.

Agent Orange, according to Tran, is the mother of them all, though. ‘If we allow it to be forgotten, the tragedy of pesticides will continue,’ she says.

And whether we mean Vietnam or Oregon, no one has been made properly accountable.