Last year when covid skeptics were saying “there’s no such thing as a covid virus,” I strongly disagreed. As a published food scientist, laboratory owner and inventor of two published patents based on mass spectrometry analysis, I was aware that SARS-CoV-2 had been genomically sequenced. Surely, I mistakenly thought, it had been isolated, purified and determined to be the cause of covid-19 sickness.

A year later, it turns out the skeptics were right. And the warnings of people like Dr. Thomas Cowan, Sally Fallon, Dr. Andrew Kaufman, Jon Rappoport, David Icke and others were right on the mark. (I have since apologized to them all in a public podcast.)

How did I come to realize the medical and scientific establishment has fabricated all this? And what’s the explanation for the very real sickness that people are experiencing?

I’ll share that story here, but in short, common cold viruses and monkey virus fragments found in flu shots are being mislabeled “covid,” and there is a weaponized spike protein bioweapon that’s being distributed via vaccine injections. That’s all real. But there’s no such thing as a real, physical, isolated covid-19 virus that has been harvested from sick people and shown to infect other people and make them sick. What we’re really witnessing here, it now seems, is three distinct things:

1) A cocktail of common cold viruses labeled “covid” which are circulating and causing sickness in some people, most likely because of the lack of immune system exposure to wild type viruses during all the global lockdowns.

2) A weaponized spike protein toxic nanoparticle that’s being injected into people as a “clot shot” … and it’s likely shedding, causing harmful side effects in other, unvaccinated people.

3) A wholly fraudulent PCR “casedemic” scheme that’s designed to flag almost anyone as “positive” based almost entirely on how many cycles the PCR sample prep instruments are instructed to carry out, thereby amplifying instrument noise to the point of a “positive” hit. Almost anything can be flagged as “positive,” including genetic material fragments from previous years’ flu shots.

These three things — combined with the media’s mass hysteria programming — have achieved a level of global fear and psychological terrorism that the world has never seen before.

But it’s all based on lies, it turns out.

And here’s how we know.

As a lab owner, published scientist and mass spec analyst myself, I am extremely familiar with the process of using certified reference materials (CRMs) to validate analysis methods and instrument calibration sequences. (I’ve spent far too many evenings creating serial dilutions of standards using a Gilson pipette, trust me…)

Here’s how the process normally works in a legitimate science lab:

Step 1) Acquire the CRM of the thing you want to test (“analyte”). This means acquiring a purified, isolated standard with a known concentration, usually in a carrier such as water, or as a dry powder. For example, when I’m testing for mercury in food, I have a certified mercury standard with a known concentration of mercury, dissolved in water, nitric acid and hydrochloric acid.

NOTE: Instruments will “match” the thing you’re looking for by a variety of methods, filtering out all other things that don’t match. In mass spec work, molecules are identified by their molecular mass, ion fragmentation patterns, and elution time on chromatography columns. For a substance to match, it has to hit all these parameters. In PCR testing, a “match” is a genomic sequence made of base pairs, defined in a digital library that may or may not have ever been run against a real, physical standard in the real world.

Step 3) Run unknown samples through the instrument (of blood serum, urine, saliva, water, food sample extracts, etc.) and see if the unknown sample contains any of the thing you were looking for (the analyte). Because you built a quant curve, you can also then determine the concentration of the analyte in the original sample. This is typically described as mass over volume, such as ng / ml (nanograms per milliliter).

A nanogram is a billionth of a gram. When we test foods for glyphosate, we can detect as little as 1 nanogram per milliliter, which tells you something about the extreme sensitivity of high-end instruments.

This is the process to test something and identify how much of something is found in something else. For example, if you were going to determine if someone was sick with “covid,” you would need to determine the concentration of covid-19 viruses in their blood (i.e. the “viral load”). This is science / biology 101.

So what’s the problem, then?

You’d be stunned to realize how deep the science fraud really goes. Consider these critical points:

Point #1: There appear to be no isolated, purified Certified Reference Materials available for SARS-CoV-2 “covid”. I’ve seen companies that claim to be selling “isolates” containing covid viruses, but in their own description, they explain that their vials contain genetic material from “host cells” (human cells) as well as bovine serum cells, which means it’s a cocktail stew of who-knows-what. Yet it’s called an “isolate.”

Case in point: BEI Resources, which offers something they call an “isolate” of covid-19, that you can find at this link. As the description states for this covid-19 “isolate:”

…[T]his product is not suitable as a whole cell antigen preparation because the protein content is largely contributed by the host cell and the fetal bovine serum used during virus propagation.

Point #2: If you have no isolated, certified reference materials, you can’t develop a legitimate analysis test. And this is exactly what the FDA admits in its own documents, which state that since covid-19 viruses weren’t available for the development of the PCR test, they “simulated” it by using human cells and gene bank coronavirus fragments. From the FDA’s own document:

Since no quantified virus isolates of the 2019-nCoV were available for CDC use at the time the test was developed and this study conducted, assays designed for detection of the 2019-nCoV RNA were tested with characterized stocks of in vitro transcribed full length RNA … spiked into a diluent consisting of a suspension of human A549 cells and viral transport medium (VTM) to mimic clinical specimen.

In other words, they faked the covid virus by using gene bank cells which were deliberately and falsely labeled “covid.”

This is how the PCR test was developed.

The FDA admits it all. The PCR test is a fraud.

Point #3: If you don’t have a CRM isolate, you can’t calibrate instruments against a known sample. And this means the PCR tests aren’t being calibrated against anything real and physical. Instead, they’re relying on downloaded digital libraries provided by none of than the CDC, the very same Big Pharma front group that’s spearheading this covid scam.

Point #4: PCR instruments are incapable of quantitative analysis. The “positive” hits are nothing but amplified background noise. No PCR instrument can tell you how much of some genetic material was found in an original sample. It can merely detect the presence of material on a yes / no basis. In lab science, this is called a “qualitative” analysis, not a quantitative analysis.

To show you what this looks like, consider the following graphic. It shows some mass spec results across a spectrum of masses. The horizontal axis here is m/z (mass over charge), which is simplified to just “mass” for general discussion. It’s the mass of the molecules or particles being detected. 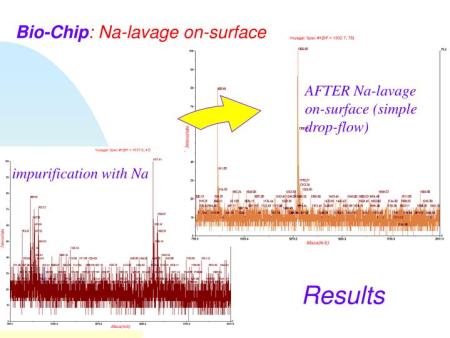 Notice the red and orange lines across the bottom of each chart. That’s largely “background” noise across all the masses. Then notice the very tall orange peak which rises above the background. This is the mass of the molecule they’re looking for. It might be a pesticide, or a contaminant, or a nutrient, etc.

Importantly, if I were to turn up the amplification of the detector, the “background noise” at the bottom of the screen would vertically expand to fill the screen. The entire screen would be a “hit” on every mass, because the amplification is turned way up. That’s the equivalent to what PCR instruments are doing when they run 30+ cycles. They are amplifying noise, and then pretending they got a “hit” on covid.

But because they’ve amplified it so many times, they’ve obliterated any ability to say with certainty what they have, or even how much they have. Because the LOD (Limit of Detection) is scientifically invalid if it can’t pick a peak out of the background noise.

Yet PCR instruments are taking background noise and amplifying it until they get a “positive” hit. This “positive” is then absurdly called a “covid case,” even though it means literally nothing from a legitimate science point of view.

The entire process being used today via PCR is complete junk science that wouldn’t pass even the most basic science lab audit. That’s why most of these PCR outfits aren’t ISO accredited, by the way. They couldn’t pass a single audit. (My lab is ISO accredited with an annual audit, including blind quantitation accuracy tests via mass spec instruments to make sure we are hitting our accuracy targets.)

Dr. Judy Mikovitz confirms it all in a recent interview

Dr. Judy Mikovitz, author of Ending Plague (PlagueTheBook.com), confirmed all this in a recent interview with me. Not only did she confirm that there is no isolated covid-19 virus that has been harvested and purified from a sick person and proven to cause disease in another person; she also confirmed that Dr. Fauci specifically chose a weaponized lab sample that was infected with a cocktail of coronaviruses to use as a basis for gain-of-function research via the Wuhan Institute of Virology.

In other words, Dr. Fauci knew he was building a Frankensteinian viral stew that the fraudulent CDC and complicit scientific community would simply label “covid.” Augmented by mass media hysteria, they could drive most of the population into submitting to vaccines which were engineered to inoculate the population with spike protein bioweapons, also developed under Fauci’s guidance and funding directives.

Thus, the real story here is that Fauci and the CDC used common coronaviruses to fake the covid pandemic in order to inject people with a real bioweapon: The augmented spike protein.

Importantly, Dr. Mikovitz confirms this all originated under the United States military, which means both the U.S. and Chinese military institutions were involved in the development and deployment of this global depopulation bioweapon (the spike protein).

Man Blows Up His Tesla After $22,000 Replacement Battery Bill
How much CO2 is in a raindrop? the ocean? the air?
Time to bring this madness to an end
Tags: Covid-19, News, Principia Scientifica