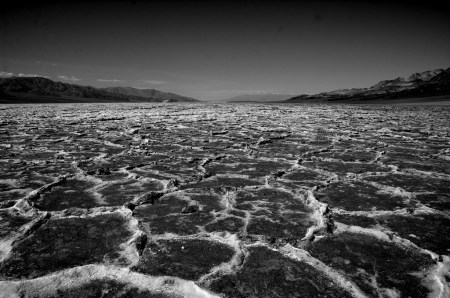 For more than thirty years we have been told that human activities are changing the world’s climate.

This has variously been referred to as global warming or climate change and it is supposedly causing altered weather patterns, rising sea levels, and also threatens mass extinctions.

We are told that increasing amounts of carbon dioxide (CO2) in the atmosphere caused by burning coal, oil, and natural gas are warming the atmosphere by what is known as the greenhouse effect.

Today’s quiz asks five simple questions that should help resolve the debate.  Generous prizes will be given to the first person to correctly answer each of the questions.

1. Has there ever been any period in the earth’s geological record when the climate has in fact not changed?

To answer this question we must first look at the normal pattern of climate on earth.  The following graph was presented by the Intergovernmental Panel on Climate Change (IPCC) in their first report in 1990 (1). 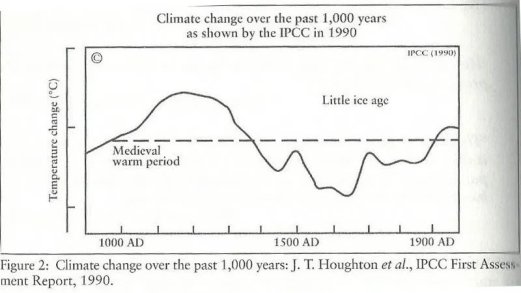 It shows a reconstruction of the earth’s surface temperature over the last thousand years and it is obvious at first glance that the temperature goes up and down quite a bit.  You will notice the Medieval warm period when civilisation prospered followed by the Little Ice Age when the Thames River iced over and life became miserable.

Next we have the very well known graph of the Holocene, a relatively warm inter-glacial period in which we are lucky enough to live (2). 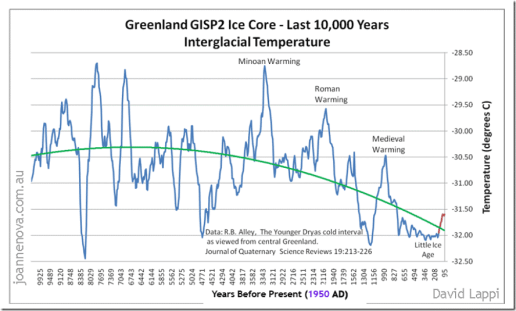 Once again you can see marked fluctuations in the earth’s temperature and you will also notice that roughly every thousand years or so there is a warming event called a Bond event and that these last a few hundred years.  We live in one of these Bond events today and you can see that each event is roughly one degree Centigrade cooler than the previous one.

Some scientists claim that the rate of warming in the current warm period is much more marked than previously however a brief glance at the graph above shows this to be nonsense.

The longest continuous thermometer record on earth is the Central England Temperature Record or CETR which started in 1659.  This record has a ninety percent positive correlation with modern northern hemisphere temperature data and you will notice that the coldest time in this record (below) was in the late sixteen hundreds following which there has been a slow, undulating rise in temperature (3).

We are told that the earth’s temperature has risen about one degree Centigrade in the last hundred years however in the CETR the temperature rose about 2.5 degrees Centigrade in only thirty five years from 1695 to 1730, two and a half times the modern temperature rise and in one third the time.

To quote the late Professor Bob Carter, that’s what I call climate change! 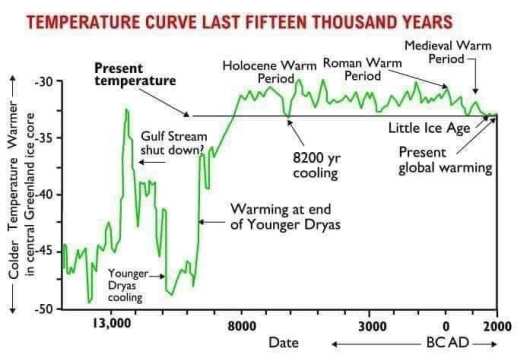 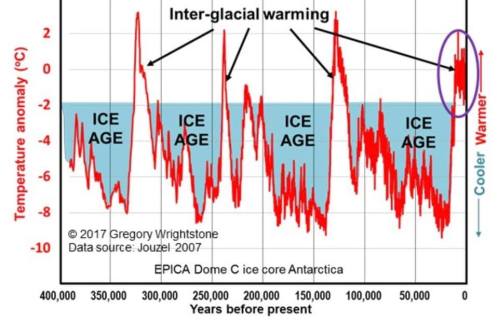 These glacial/interglacial cycles were very cleverly explained by the Serbian mathematician Milutin Milankovic in the 1920s and bear his name.  He calculated that the cycles were related to variations in the earth’s orbit, changes in its axis, and “wobbles” about its axis.

On an even longer time frame of five million years we can see a slow and gradual cooling trend with very marked ups and downs in global temperature (6).

So, is the earth’s climate stable and constant?  Obviously not, and furthermore most of the previous temperature changes were vastly more dramatic than anything that has happened in the last 100-200 years. 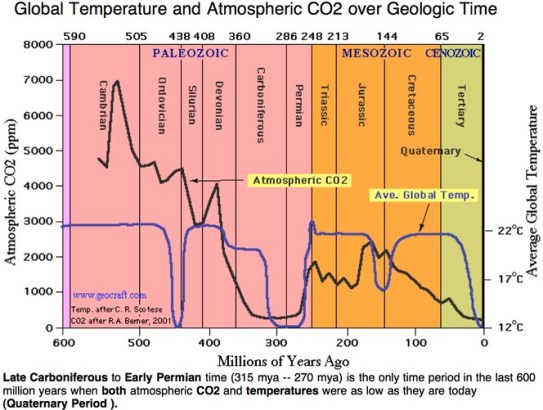 Other data, such as the Holocene graph below show an inverse correlation between CO2 and temperature (8).

Albert Einstein and Richard Feynman both won the Nobel Prize in Physics at different times and they both stated very clearly that it didn’t matter how much evidence there was to support a scientific theory, it only took one experiment or one piece of observational data (evidence) to prove that the theory was wrong.

This single graph above proves that CO2 does not drive temperature.

The following chart shows temperature changes at Mauna Loa (9).  That’s the location in Hawaii where they record atmospheric CO2.  Note the gentle decline in temperature over a forty year period during which time atmospheric CO2 levels rose from around 340 ppm (parts per million) to the current level of about 410 ppm.

How does that work?  Isn’t CO2 supposed to raise atmospheric temperature?

Even on very short time frames and using the most accurate satellite temperature data and spectrographic CO2 measurements (below) it can be shown that CO2 does not drive temperature (10). 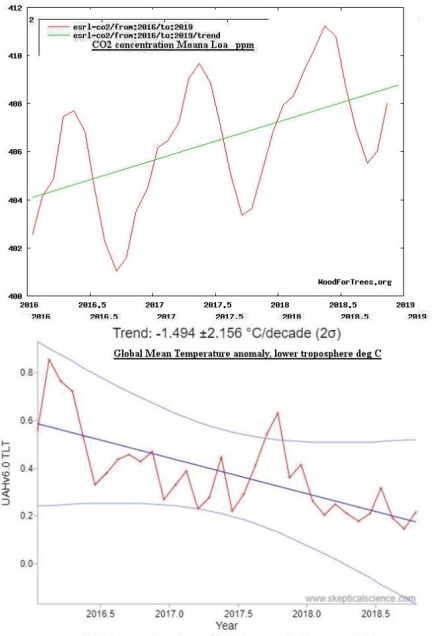 Many people argue that there is a consensus and that 97 percent of climate scientists agree that human production of CO2 is raising the earth’s temperature.

Consensus is not relevant to the physical sciences.  It is a socio-political tool where the majority agrees on a particular decision or plan.

When scientists calculated the speed of light they didn’t have a vote or a show of hands.  Physical science is based on accurate, reproducible data that either supports a theory or disproves the theory, in which case it is modified or even abandoned.

Science is the process of observation and analysis

Science can be defined as the process of observation and analysis.  All that means is that when we notice something happening in the natural world, we try to figure it out.

When we get an idea to try to explain a natural phenomenon this is called an hypothesis, and when this idea is developed into a model which can firstly be tested by experiment, and secondly be used to make predictions, it is called a theory.

Dr Emmett Brown clearly understood this when he put a flux capacitor into a DeLorean and stated “If my calculations are correct, when this baby reaches 88 miles per hour, you’re going to see some serious stuff”.

What qualifications do you need to study science?  The only qualification required is an open and enquiring mind.  Naturally the whole process is a little easier if you have done some physics or chemistry at school or university.

Moving back to the CO2 versus temperature debate there is also quite a lot of data showing a positive correlation between CO2 and temperature on various time frames however this data shows without exception that temperature moves first and changes in CO2 follow (11).

Where a positive correlation exists between CO2 and temperature the data shows without exception that temperature moves first and CO2 follows. 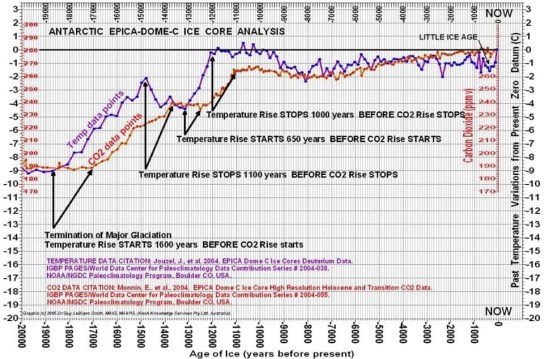 Former US Vice President Al Gore famously displayed the 450,000 year ice core data (below) in his movie showing a striking correlation between CO2 and temperature and suggested that this confirmed the driving effect of CO2 on temperature.

However when the data was analysed in greater detail it showed once again that changes in temperature preceded corresponding changes in CO2 by about 500-1500 years with an average of 800 years (12).

Why does this happen?  The oceans hold about fifty times as much CO2 as the atmosphere and in accordance with Henry’s Law when the temperature of the oceans rise there is outgassing of dissolved CO2 into the atmosphere.

The climate change/global warming theory is backwards.  The cause must always precede the effect.  You can’t put the cart before the horse!

There is no scientific data on any time frame that shows a rise or fall in atmospheric CO2 followed by a corresponding change in temperature.

Have you ever wondered how the “greenhouse effect” is supposed to work?  The IPCC and other learned organisations tell us that the sun warms the surface of the earth and that this in turn warms the atmosphere.

They focus on outgoing long wave radiation as the main method of warming of the atmosphere although there are at least three mechanisms by which the earth warms the atmosphere and outgoing radiation is the least significant of these.

They call this a “runaway greenhouse effect” and it sounds a bit like an energy creation scheme.

The study of heat energy is called Thermodynamics and it is governed by four laws.  The First Law tells us that energy can neither be created nor destroyed and clearly this greenhouse effect violates the First Law.

The Second Law tells us that the net transfer of heat is always from a warmer object to a colder object.  Anyone who has traveled in an airplane knows that the outside temperature at cruising altitude is about minus 40 degrees Centigrade.

There are no known exceptions to the Laws of Thermodynamics and the greenhouse gas theory violates both the First and Second Laws.  It is a rubbish theory.

But what about the “back radiation”?  Surely it must contribute to warming something?

So why doesn’t the radiation coming down from the troposphere warm the earth?

The absorption of radiation by any object behaves just like the strings on a violin, only in reverse.  A violin string has a specific length and thickness, and is tuned to a certain tension all of which give it its characteristic pitch (frequency).

Absorption of radiation is the same, except in reverse.  A molecule can absorb radiation dependent on its intrinsic vibrational frequencies and can absorb shorter length (higher energy) radiation but just as a violin string cannot make a lower pitched note, the molecule cannot absorb longer length radiation, hence the Second Law of Thermodynamics is satisfied.