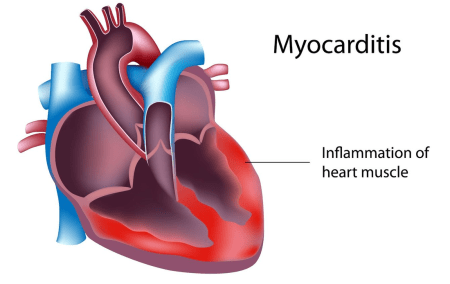 This will blow your mind, I promise. I’m pretty sure that the rate of myocarditis is a LOT more than the CDC is telling people. I think the rate is ~100X higher than they claim. What do you think?

Seriously?!? A rare potential risk, eh? Are you kidding me?!?

Look, just because she said that doesn’t mean it is true.

For a long time, I’ve been on the record as saying that the rate of myocarditis is around 1 in 317 for teenage boys. That was a conservative estimate since it used a VAERS under-reporting factor (URF) of 41, which is reserved for only the most serious events.

Since the CDC calls this “mild” (even though every cardiologist I’ve asked says there is no such thing as “mild” myocarditis), we’d expect a URF of perhaps 80 or more since nobody died and most had a short hospital stay.

I didn’t want to use that in my original slide because 1 in 317 was already far from the CDC estimate of 1 in 13,000 which they said was “rare.” If I was more accurate, my work would be more likely to be ignored as ridiculously high. So I went with a very conservative URF=41. Here’s the slide I’ve been using up until today: 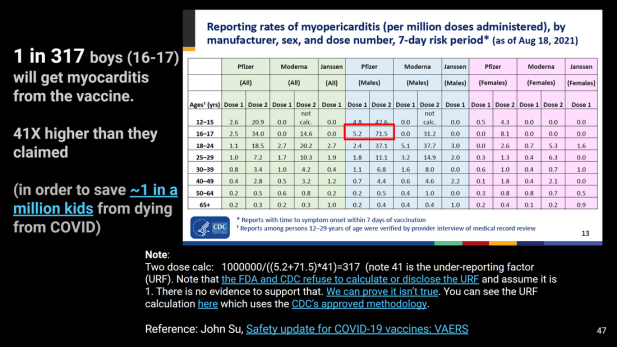 Finally, I heard some data from a private school that validates my estimate

Today, I heard from a parent of a child who attends Monte Vista Christian school that 3 children were diagnosed with myocarditis after they got the vaccine. The school has 855 kids. In autumn, the parent learned that 3 students had myocarditis.

Let’s do a little math.

The ratio of male to female rates of myocarditis is roughly 10:1 so it’s a good bet these were all boys. Roughly half the school are boys. There has never been a vaccine mandate at the school. So I’d estimate conservatively that 2/3 of the kids could have been vaccinated by then. So 855/2*2/3 = 285 vaccinated boys.

This makes sense to me overall; it is not far from my 1 in 150 estimate.

1 in 95 boys with myocarditis is a train wreck

1 in 95 boys with myocarditis (which is never “mild”) should cause an immediate halt to the vaccines and an examination of how the CDC could possibly miss a safety signal this large.

But I also know what will happen next.

So nobody will know for sure whether I was telling the truth. A lot of the parents of course will know I am. But they aren’t going to speak out. I hope that they do, but I doubt it. Nobody wants to get their head chopped off.

The source who disclosed this information to me isn’t going to go public or obtain unassailable proof of this because that would get someone in trouble. I was requested to ensure all the details were scrubbed so that nobody could be identified other than the school.

Nikki Daniels, MVC’s Interim Head of School, did not respond to an email asking her to confirm the information I received. I can’t say I’m surprised.

That’s totally understandable in today’s supercharged environment of intimidation where relationships can be damaged permanently when people speak out.

But there are going to be people who see exactly the same thing happening in their schools. And they will be afraid to speak out as well. But at least they will know they are not alone. That’s why I wrote this article, in the hopes that it will motivate someone who is not intimidated to speak out.

So this will be a statistic that we all know about and share amongst ourselves, but cannot talk about because we don’t want to get anyone in trouble.

It’s really unfortunate that people are afraid to speak the truth. But this is the society we live in today. This is America where we value relationships over lives. It’s really sad.

My stat isn’t cherry picked. This is the first statistic for a rate in myocarditis in a school that anyone has ever revealed to me. And even then, it was under condition of anonymity of all parties involved. But my source is extremely credible.

Most schools won’t ever say anything as to their stats on myocarditis so nobody will ever find out how dangerous the vaccines are.

Anyone who knows will not say anything or they get their head chopped off.

Someone revealed it to someone else thinking it wouldn’t go anywhere. That cycle repeated until it got to me. This is why I have so few data points to go on.

So I’m not cherry picking. I only had one cherry to pick from.

Here’s another stat I have from a physician in Canada. He doesn’t have a lot of young patients. He has older patients. He’s been in practice for 29 years and has 1,200 patients.

Kinda like seeing all those athletes drop on the field this year after the vaccines rolled out.

Here are the details:

The authorities will reassure you that this is just a fluke and should be ignored. Whew. That’s a relief. What a great, credible explanation, supported by no evidence.

Next, they will try to find out who revealed this and have her medical license revoked. That’s why she can’t reveal her identity.

I’m glad I’m in such good hands and there are no intimidation techniques being used to silence doctors. I’m sure you feel the same way. These Medical Board are so responsible. And the best thing is that they are self-regulating. Got a complaint? They’ll handle it. It’s called “no accountability.”

From my heathcare provider substack:

I am a Canadian nurse (for a few more days I will retain that designation) that lost my job over vaccine mandate. Placed on unpaid for 2 months, opted to retire (in my 60’s) to at least have some income. It was probably 6-7 months before I’d planned to go. My union is fighting the mandate and there is perhaps a small hope that the several grievances will provide some payout to me in a year or two.

I have no confirmations, but saw a couple of dialysis patients pass away having d dimers higher than I have ever seen in my career (10-20 times higher), and with stroke & cardiac symptoms as well. No one ever questioned ☹️. I was the only person in my unit to decline the shot. I’d had issues (up to requiring brain surgery) after my one & only flu shot, and have severe (anaphylactic) allergies. I received my first pension payment December 1 (after requesting early November!).

All unvaxxed staff at my employer were fired December 2. (All had been on unpaid leave since mid-September. Canadian federal gov’t changed rules in October so that no one who lost a job because of no jab could receive unemployment insurance. They (our feds) are *very* controlling and very petty.

Not only did the CDC likely get the rate wrong by a factor of 100, but this video, recorded by UCSF Professor Vinay Prasad, shows that the rates of myocarditis from the vaccines are much higher than those from COVID, particularly for the Moderna vaccine. 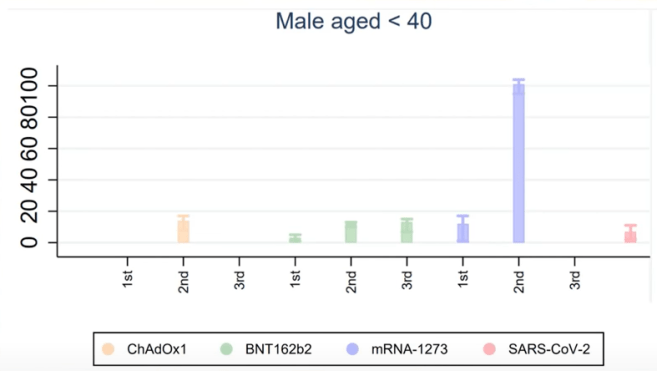 Whoops! The CDC screwed up on that too. All the members of the outside committee that reviews vaccines (ACIP), relied on a false representation by the CDC.

Don’t worry, be happy. The CDC says to shut up and take the vaccine.

OK, they got the myocarditis rate in teenage boys wrong by 100x. Nobody cares.

And they got it wrong about vaccine safety. The vaccines are way more deadly than COVID with respect to myocarditis. Nobody will pick up on that either. Too much cognitive dissonance to accept that.

But hey, we live in a world where facts like this simply do not matter. The attitude is “we don’t care how many kids we kill, just shut up and take the vaccine.”

There are many other data points indicating the vaccines are super dangerous from a cardiac perspective. Here are three of them.

1. VAERS statistics for these vaccines are off-the-charts for cardiac events, some elevated nearly 10,000X normal, yet the CDC doesn’t find a signal. If you want objective proof of corruption, you can’t beat this 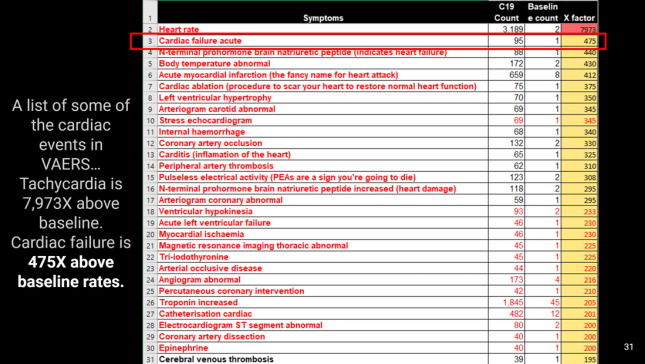 How you can help

I’d bet that people reading this will have other stats similar to this and the totality of the data will be very hard to explain.

If you know the myocarditis rate in your school, please post it in the comments.