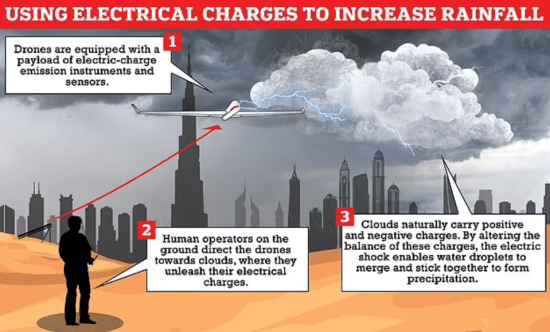 The United Arab Emirates uses drones that fly into clouds and deliver an electric shock to “cajole them” into producing precipitation amid dangerous heat waves regularly surpassing triple digits.

According to Daily Mail, UAE’s National Center of Meteorology (NCM) is flying drones equipped with electric-charge emission instruments that deliver an electric charge to air molecules, which generally encourage precipitation.

The country already uses cloud-seeding technology, such as dropping salt and other chemicals into clouds to stimulate precipitation.

The latest cloud seeding operations via drones is part of a $15 million program that is already producing rain in the country, which ranks one of the top driest in the world.

The country has plenty of clouds, so triggering rainstorms with electrical charges via drones shouldn’t be an issue.

Not every cloud will trigger, but seeding “increases the amount of rain by between five and 70 percent,” Daily Mail said.

Rain triggered through cloud seeding is much cheaper than desalinated water, where about 42 percent of the country’s water originates.

Cloud seeding via drones has enormous potential and shows water can be tapped from the sky. This technology might be helpful to North and South America, where huge megadroughts impact water supplies and damage crops.

The downside to artificial rain in arid climates is that these areas aren’t well-positioned to handle downpours and may result in flash floods.

There’s always a caveat when playing with Mother Nature.