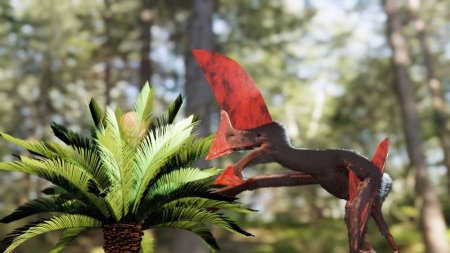 A fossil acquired in a police raid has turned out to be one of the best-preserved flying reptiles ever found, according to a study published August 11, 2021 in the open-access journal PLOS ONE by Victor Beccari of the University of São Paulo and colleagues.

Tapejarids (an Early Cretaceous subgroup of flying reptiles called pterosaurs) are known for their enormous head crests and their abundance in the fossil record of Brazil, but most Brazilian tapejarid fossils preserve only partial remains.

In this study, researchers describe an exceptional tapejarid specimen which includes nearly the entire body, mostly intact and even including remnants of soft tissue alongside the bones, making it the most complete tapejarid skeleton ever found in Brazil.

This fossil belongs to a species called Tupandactylus navigans, and it has a dramatic history. It is preserved across six square-cut limestone slabs which were confiscated during a police raid at Santos Harbour in São Paulo. It is now among the collections of the University of São Paulo, where researchers were able to reunite the slabs and examine the entire fossil, even CT-scanning to reveal the bones concealed within the stone.

This is the first time that paleontologists have been able to study more than just the skull of this species. 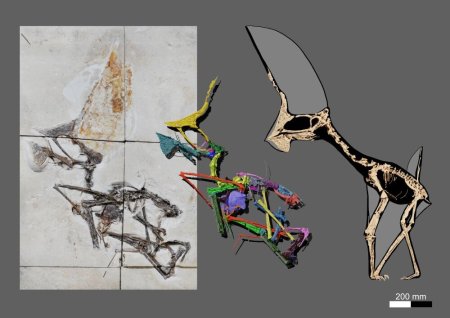 The description suggests this species had a terrestrial foraging lifestyle, due to its long neck and the proportions of its limbs, as well as its large head crest that could negatively influence long-distance flight. However, the specimen possesses all the necessary adaptation for powered flight, such as the presence of a notarium and a developed muscle anchoring region in the arm bones.

This specimen also has an unusually large crest on its chin, part of its already impressive skull ornamentation. Precisely how all these factors contributed to the flight performance and lifestyle of these animals will be a subject of future research, among the many other questions that can be answered through study of this exceptional fossil.

The authors add: “We described the most complete tapejarid fossil from Brazil, a partially articulated skeleton of Tupandactylus navigans with soft tissue preservation. This specimen brings new insights into the anatomy of this animal and its constraints for flight, arguing for terrestrial foraging ecology.”