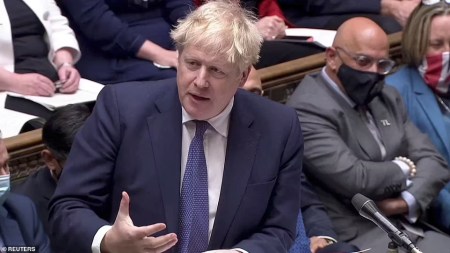 Yesterday Boris Johnson all-but ruled out another lockdown but warned that Plan B curbs will stay in place at least until the end of the month – amid hopes the Omicron wave is slowing down.

He said bluntly that the government ‘does not believe we need to shut down our country again’. Instead Cabinet has agreed to stick to the existing ‘balanced and proportionate’ restrictions in England that are ‘taking the edge off’ the Omicron wave.

The obligation to work from home where possible, as well as wear masks in many settings and use Covid passes at large events and nightclubs will be reviewed again before January 26, the day regulations are set by law to expire unless specifically extended.

The premier was congratulated by senior Tories including Jeremy Hunt and Theresa May for holding his nerve despite pressure to clamp down before Christmas.

Challenged by another former minister, Steve Baker, Mr Johnson said he hoped that once Omicron has ‘burned through’ the country ‘life will return to something much, much closer to normality’ and the current restrictions will ‘not be necessary’.

But he has also disappointed many by batting away calls for the self-isolation period to be trimmed to five days to help fill gaps in the workforce – with more than a million people currently under house arrest.

Mr Johnson told MPs: ‘In response to the latest data, the Cabinet agreed this morning that we should stick with Plan B for another three weeks, with a further review before the regulations expire on 26 January.

‘People in England should carry on working from home whenever they can, wear face coverings on public transport and in most indoor public places, and take a test before going to high risk venues or meeting the elderly or vulnerable.

‘All of these measures are helping to take the edge off the Omicron wave, slow the spread of infection, manage the immediate pressures on our NHS and buy time for the boosters to take effect.

‘And those in Scotland, Wales and Northern Ireland should, of course, continue to follow the rules where they live.’

The PM said he knew some MPs would ask whether the country should be ‘moving towards a full lockdown’.

‘But lockdowns are not cost free. They impose a devastating toll on our physical and mental wellbeing, on our businesses, jobs and livelihoods, and, worst of all, on the life chances of our children,’ he went on.

‘So this government does not believe we need to shut down our country again. Instead we are taking a balanced approach, using the protection of the boosters and the Plan B measures to reduce the spread of the virus, while acting to strengthen our NHS, protect critical national services and keep supply chains open.’

Business chiefs have begged Mr Johnson to cut self-isolation as around 1.3million people languish under house arrest and rail services and bin collections grind to a halt.

The PM is facing mounting pressure to trim the quarantine period again from seven days to five after he gathered his Cabinet ministers to sign off on sticking to ‘Plan B’ restrictions.

As Parliament returns from its Christmas break, Mr Johnson will face a PMQs grilling this afternoon before making a Covid statement to the House.

Testing rules are being loosened in an effort to reduce the pressure on the system, with people who are positive on lateral flows spared having to do a confirmatory PCR.

Meanwhile, travel regulations are also due to be overhauled, axing the requirement for tests before arriving in the UK.

However, the PM has up to now batted away calls for a change on self-isolation, voicing concern it could make the problems worse.

Staff absences are threatening to cripple the country after infections hit another record daily high of 218,000 – meaning nearly 1.3million people have been positive in the past week.

Richard Walker, managing director of the Iceland supermarket chain, warned that although it is coping so far the absentee chart is now ‘almost vertical’ – with levels more than double the peak of the ‘Pingdemic’ last year.

‘My call on government would be firstly to prioritise lateral flow tests for key workers including food retail front line shop workers, but also to revisit the onerous isolation rules.

‘Seven days is a long time for people who are triple jabbed when the symptoms are for the vast majority of people not more than a common cold or mild flu.’

Matthew Taylor, chief executive of the NHS Confederation, also suggested he would support the move as long as it is science-led.

The government has announced that only people with symptoms should take PCR tests, although those who are asymptomatic and positive on lateral flows should still isolate for at least seven days.

Hawkish ministers have hailed Mr Johnson’s resolve in refusing to bow to calls for more restrictions before Christmas.

One Cabinet minister told MailOnline the public would give him credit for ‘bravery’. ‘I think the PM took the right decision. It was the brave decision. He was right about Freedom Day and now this.’

But there is increasing pressure for action to ease pressure on workforces. Craig Beaumont of the Federation of Small Businesses said: ‘Five-day isolation would help tackle some of the staff absences that we are seeing now really climb.’

Health minister Gillian Keegan told BBC Breakfast: ‘We’ve had two years of a pandemic, there is a build-up of people who haven’t come forward who need electives – there is a backlog we need to deal with – and then you have got the unknown of Covid – we now know we have Omicron – and also flu was a big unknown as well, how much flu we would have this year.”