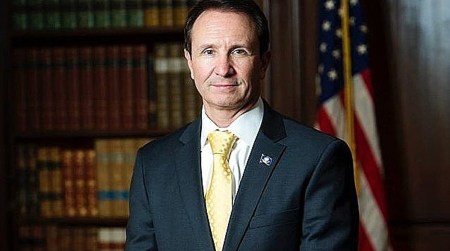 A federal judge has issued a nationwide injunction on President Joe Biden’s oil and gas permitting ban on federal lands.

The court initially found the administration’s moratorium on issuing new leases was illegal in June 2020, but the Biden administration ignored the court’s decision until November.

The Biden administration refused to offer its first oil and gas lease sale until mid-November.

Louisiana Attorney General Jeff Landry (pictured) was the lead plaintiff in the lawsuit challenging the leasing moratorium. He was joined by the AGs from 12 other states, including Alabama, Alaska, Arkansas, Georgia, Mississippi, Missouri, Montana, Nebraska, Oklahoma, Texas, Utah, and West Virginia.

Prior to oral arguments, Landry’s office issued a press release saying the Biden administration cannot legally halt all lease sales because Congress, by statute, has commanded that lease sales happen on a regular basis.

“Joe Biden is harming tens of thousands of American jobs using legal strategies that he knows will fail, all in an attempt to satisfy his political base,” said Landry. “Furthermore, he is doing nothing to lower energy prices or relieve the pain at the pump which are hurting the poor and the middle class.”

“By executive fiat, Joe Biden and his administration have single-handedly driven the price of energy up – costing the American people where it hurts most, in their pocketbooks,” Landry said in separate press release issued at the time the lawsuit was filed, in March. “Biden’s Executive Orders abandon middle-class jobs at a time when America needs them most and put our energy security in the hands of foreign countries, many of whom despise America’s greatness.”

Landry called the court’s decision good for America, saying the federal injunction is a victory not only for the rule of law, but also for the thousands of workers who produce affordable energy for Americans.

The federal court ruled Biden’s leasing moratorium illegal in June, 2021, but the administration ignored the court’s order, saying it was justified in doing so until all appeals were exhausted.

In mid-November the court affirmed its nationwide injunction, at which point the Bureau of Ocean Energy Management (BOEM) held the first Gulf oil and gas lease sale in mid-November 2021.

The judge’s ruling and the lease sale resulting from it are good for Louisiana and the nation as a whole, Mike Moncla, President of the Louisiana Oil & Gas Association said in a statement.

“This lease sale is an important victory, not only for the 250,000-plus oil and gas workers in the state but for every American who is facing high energy costs as a result of our diminished oil and gas supply,” Moncla said. “We look forward to working with Attorney General Landry as we continue our opposition to the Biden administration’s failed energy policies that undermine our nation’s recovery from the COVID-19 pandemic.”

Restricting oil and gas leases on federal lands was never about saving the planet, says Bette Grande, president of the Roughrider Policy Center.

“In Louisiana v Biden the judge issued an injunction compelling the BOEM to act,” said Grande. “Interior’s response to that injunction, citing E.O. 14008, was to slow-walk toward compliance.”

“Industry experts welcome the end of the lease sale moratorium but are wary of new regulatory hurdles that will come in its wake,” said Grande. “The efficient development of shale resources requires planning and capital, but producers are forced to hopscotch around federal roadblocks; the result is waste, inefficiency, and an uncompensated taking from mineral owners – all in the name of fighting ‘global warming.’

“Biden’s response to the higher gas prices brought about by his policies is to beg countries in the Middle East to sell us more oil,” Grande said. “This proves the administration’s policies are not about the climate, rather they are aimed at lining the pockets of a crony corporatist cabal – follow the money.”