A few days ago, the Daily Mail noted the BBC has deleted it’s GCSE revision guide on the Bitesize part of their website that listed the benefits of ‘climate change’ after fury from environmental activists.

They found themselves on the receiving end of furious outrage from environmental activists after including an online GCSE revision guide that listed the creation of shipping routes due to melting ice and lower heating bills thanks to warmer winters among a list of benefits of a warmer climate.

Inevitably, the indoctrinated activists called the decision an ‘absolute disgrace’.

The BBC said it decided to remove the list of ‘positive’ effects because it did not ‘follow the national curriculum‘. The guide now shows only the negative impacts of global warming, such as rising sea levels, droughts and greater risk of flooding. It completely ignores the fact that, as Dr Tim Ball told me, ‘extreme weather’ is reduced in a warmer world, NOT increased. Extreme weather increases in a cooler world.

In other words, only climate alarmism can now be taught in schools, skepticism is strictly verboten.

The image below shows what the BBC had said. 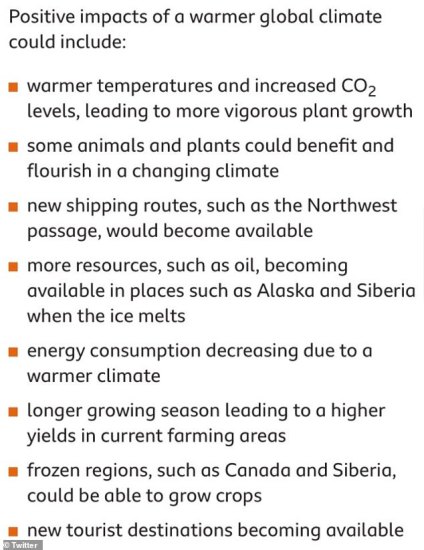 Other benefits of a warmer climate included warmer temperatures leading to ‘healthier outdoor lifestyles’, there would be ‘new tourist destinations’, ‘oil becoming available in Alaska and Siberia’ as the ice melts, and some animals and plants may ‘flourish’.

We already know plant and crop growth is increasing steadily as the climate warms and from the CO2 fertilisation effect, but the alarmists can’t have the public knowing this.

The well-known indoctrinated activist, and Guardian ‘journalist’; George Monbiot, was the first to slam the BBC, after he was apparently ‘tipped off by a teacher‘. He argued the web page read like ‘fossil fuel propaganda’ and would leave schoolchildren thinking global warming was ‘pretty good’.

‘Climate experts‘, campaigners and teachers said the arguments were ‘flat wrong’ and did not reflect what was on the current syllabus.

They are correct about the syllabus, as that only allows alarmist propaganda and lies to be taught in schools.

However…other commenters called for a change to Government guidance, as they claimed it was not the BBC’s fault.

One person wrote online: ‘And once again the BBC is taking the flak for a government decision. The national curriculum requires that positives must be taught as well as negatives, even for things like catastrophic climate change. BBC Bitesize follows the curriculum.‘

Hooray, someone with an ounce of common sense!

Exam board Eduqas said the suggestions were not within its GCSE geography specifications, adding that while it asked students to explore opposing attitudes to climate change it did not ‘advocate a positive viewpoint’.

We know they don’t.

Stuart Lock, the chief executive of a group of schools in Bedfordshire, tweeted: ‘I think this is flat wrong, doesn’t align with the national curriculum or exam specs, and needs reconsidering. Climate change isn’t a “both sides” argument.’

You can ‘think’ whatever you like Mr Lock, but that doesn’t make it a fact.

On July 2nd, the BBC said: ‘We have reviewed the page and have amended the content to be in line with current curricula.’

In 2018, the BBC made the decision not to include skeptics in any broadcast piece on the climate.

In a briefing note sent to staff, and added to a corner of their website, it stated: ‘To achieve impartiality, you do not need to include outright deniers of climate change in BBC coverage, in the same way you would not have someone denying that Manchester United won 2-0 last Saturday. The referee has spoken.’

Note the use of the word ‘deniers’.

They seem to think being impartial explicitly excludes climate skeptics. That is NOT being impartial. That is taking a political stance, something which violates their own constitution.

They have also said they accept the IPCC position on climate change without question.

I don’t know about you folks, but to me this just brings home how the BBC has become a political mouthpiece for climate alarmism, seemingly intent on indoctrinating the public into believing we face an existential threat, which in reality simply does not exist.