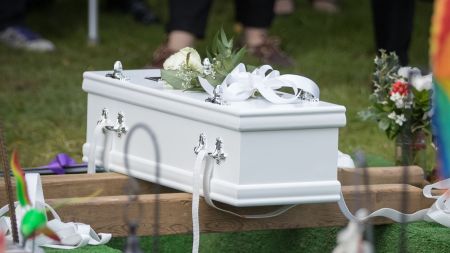 A baby whose mother received two COVID vaccine shots during her last trimester of pregnancy was born bleeding from his mouth and nose, and died the day after his birth, according to a recent report to the U.S. government’s Vaccine Adverse Event Reporting System from a foreign “regulatory authority.”

The baby boy was born on the morning of October 6, 2021, after his mother received two experimental mRNA Moderna shots on July 19 and August 13. He was expected on October 15 but was delivered weighing 2,800 grams (just over six pounds, two ounces) in hospital after a labor marked by unstable fetal heartbeat.

“The doctor said that after the patient was born, there was a cry. When the umbilical cord was cut for newborn care, the nursing staff found that the patient had symptoms of oral and nose bleeding, and immediately asked the pediatrician to intubate and give him oxygen, and he was admitted to the NICU,” according to the report received by the Vaccine Adverse Event Reporting System (VAERS) November 18 from an unidentified foreign health agency. “In the NICU, his result of examination showed abnormal blood coagulation, pulmonary hemorrhage [acute bleeding from the lungs], and cardiac dysfunction.”

According to the VAERS report (No. 1879991) on the death following “transplacental exposure” to the mRNA vaccine, it was unknown if an autopsy was performed and no cause of death was reported, but the infant’s father suspected it was related to the vaccine.

The infant death is one of 52 reported deaths among 30,550 adverse events recorded by VAERS for children under 17 years old as of December 3.

Among the other reports:

Other recent reports to VAERS include the death of a two-year-old Alaska boy following COVID vaccination. The report of his death briefly appeared in reports posted on VAERS. The record said the boy “began bleeding out the mouth, eyes, nose and ears within six hours of the shot” and died the same evening.

The report appeared briefly on the VAERS website on Thanksgiving Monday in a batch of 14,529 records which were downloaded, according to a VAERS analysis website run by an anonymous data tracker. The retracted reports were then reloaded onto the website on December 3, but the record of the two-year-old’s death was not among them.

While no COVID vaccine has been authorized for children as young as two, numerous reports of accidental vaccinations of children with adult doses, or children who mistakenly received COVID shots instead of other vaccines for their age group are recorded.

A four- and five-year-old brother and sister both received adult-dose COVID vaccines instead of flu shots from a Walgreens pharmacy and developed heart complications afterwards, for example.

The Food and Drug Administration granted emergency use authorization (EUA) for Pfizer’s abortion-tainted COVID vaccine for children aged five to 11 on October 29, 2021 so more data on that age bracket can be expected to be recorded to VAERS in the coming months, especially as mandates are introduced.

The vaccine is experimental and uses a novel gene therapy that hijacks cellular machinery to manufacture spike protein which the body is meant to manufacture antibodies against.

LifeSite asked the U.S. Centers for Disease Control and Prevention (CDC) to confirm the case and why it was removed from the database, but the agency’s media group did not respond to the questions.

In Canada, when Independent Member of Provincial Parliament Rick Nicholls asked Ontario Minister of Health Christine Elliot about the reported rise in stillbirths among vaccinated mothers in the province this week, the government ignored his questions and refused to answer.

Bleeding disorders are described in thousands of VAERS reports including 2,177 records of deaths following COVID vaccination. Many of these reports include descriptions of patients experiencing nosebleeds, blood in stool from gastric bleeds, brain bleeds, bruising, and bleeding from the mouth.

One VAERS report describes a five-month-old breastfeeding baby who died from a rare autoimmune bleeding disorder, Thrombotic Thrombocytopenic Purpura (TTP) after developing a rash the day following his mother received a COVID vaccine.

TTP has been reported in a number of people who had been vaccinated with AstraZeneca and Johnson & Johnson’s vaccines. A Norwegian study put the rate at one case in 26,000 vaccine doses. If this rate were to be applied to 76 million American vaccinated children, 2,923 children could be expected to develop the potentially lethal bleeding disorder.

Among VAERS reports for six- to 17-year-olds are 1,094 serious heart conditions, most for potentially lethal myocarditis and pericarditis, and most (997) following Pfizer’s vaccine.

Health Canada reports 1,428 instances of myocarditis/pericarditis among 1,598 cardiac disorders, affecting those an average age of 27 but children as young as 11. The agency received 1,138 reports from healthcare professionals of bleeding and blood clotting disorders after COVID vaccination in Canada.

Most injuries in VAERS are neurological, according to Robert F. Kennedy, Jr., president of the Children’s Health Defense, who testified earlier this week to a Louisiana House Health and Welfare Committee considering a bill to add COVID vaccines to the mandated vaccine schedule for children in the state.

Kennedy said Pfizer hid at least one serious injury to a child in its vaccine trial, which included only 1,100 children. Maddie De Gary, a 12-year-old girl from Cincinnati, Ohio who took part in Pfizer’s trial and immediately developed a fever and seizures, is permanently disabled by the vaccine, but Pfizer pretends she does not exist. “She is in a wheelchair for life. She can only eat through a feeding tube through her nose,” said Kennedy. “She was one of the 1,100 children. When we went back and looked at Pfizer’s study, they said Maddie De Gary had a stomachache. So, they lied.”

“If one in 1,1000 children look like this, this is an injury that will affect 75,000 [American] children,” if 76 million American children are force-vaccinated, Kennedy added.

Kennedy called the COVID vaccine the “deadliest vaccine ever made,” showing a graphic illustrating COVID vaccine injury logged by the U..S. government in eight months since its rollout comprising more than half of all vaccine injuries recorded to the agency in 33 years.

So far, uptake of the experimental shots for children has remained low in some regions of the country. In Butte Country, California, just 3% of eligible children under 12 have been doubly vaccinated and six percent have received one shot. In Shasta County, just 4.7 percent of children have taken a first dose of Pfizer’s lucrative experimental injection.

State data show that the Bay Area counties including San Francisco have the highest vaccination rates ranging from 26 to 51 percent with at least one dose, but the statewide average for five- to 11-year-olds is 13.5 percent.

Although reports to VAERS do not confirm that a vaccine caused an injury, a major Harvard-Pilgrim study also showed that only a fraction – as little as one percent – of vaccine effects that should be reported to the government are in fact reported.