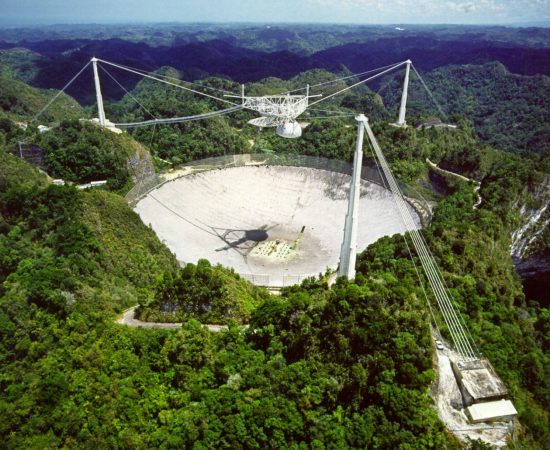 The first reports into the terrible collapse of the iconic radio telescope at Arecibo in Puerto Rico have been published bu the National Science Foundation.

On December 1st, 2020, the large antenna platform housing the scientific instruments collapsed onto the 1000-foot diameter aluminium lattice reflector dish structure, after the supporting cables failed at tower four. It was 57 years old.

The three reinforced-concrete support towers are named after their positions on a clockface; four, eight and twelve. Each tower had four cables to support the weight of the antenna platform, and additional cables; known as backstays, ran away from the dish to large concrete anchor points. The backstays can clearly be seen behind tower eight in the header image.

History of the Arecibo radio telescope

As part of the US DoD Advanced Research Projects Agency (ARPA) missile defense program, ARPA had sought a means to try to detect incoming missiles while they traveled through the ionosphere. The Arecibo Telescope was funded as a means to study Earth’s ionosphere for this purpose, and serving a dual-use as a general-purpose radio telescope. Construction of the telescope and its supporting facilities were started in mid-1950s, with the telescope operational by November 1963.

In the early 2000s, NASA started to reduce their contribution to the Arecibo Observatory, putting more pressure on the NSF to continue to fund the facility. In 2006, the NSF made its first possible suggestion of significantly reducing its funding towards Arecibo and potentially decommissioning the observatory. Academics and politicians lobbied to increase funding bookmarked for Arecibo to stave off its closure, and NASA recommitted funding in 2011 for study of near-earth objects.

However to further cut losses, in 2011 the NSF delisted Arecibo as a FFRDC, removed Cornell as the site operator, and replaced them with a collaborative team led by the company SRI International, which allowed the observatory to be able to offer its facilities to a wider range of projects.

In 2018, Damage to the telescope from Hurricane Maria led the NSF again to consider the possibility of decommissioning the observatory as the costs of maintaining it had become too great. A consortium led by the University of Central Florida (UCF) stepped forward to offer to manage the observatory and cover a significant portion of the operations and maintenance costs, and in 2018, the NSF made UCF’s consortium the new site operators.

The Beginning of the end?

A 1997 upgrade included the addition of the large Gregorian Dome, attached to the Azimuth Arm, which is the curved structure underneath the rotating segment of the antenna platform. 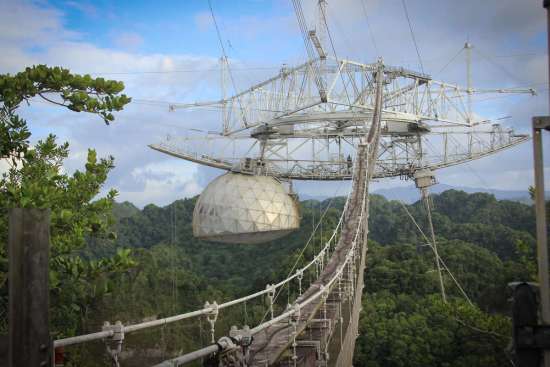 This dome and its associated equipment increased the weight of the antenna platform by almost 50 percent. To counter the additional strain on the existing twelve three-inch support cables, two more were added to each tower, and two more backstays per tower.

To counter the tendency of the antenna platform to sway in the wind, which interfered with sensitive measurements, three additional tie-down cables were added to the corners of the triangular structure, anchored through the reflector dish into the ground beneath. This increased the stress on the main support cables even further.

In 2017, hurricanes Erma and Maria passed over Puerto Rico, and their high winds may have put even more strain on the entire structure. One of the long Line Feeds broke off the underside of the antenna platform and crashed through the reflector dish.

Death of a Giant

In August 2020, one of the three-year-old auxiliary cables added after the fitting of the Gregorian Dome failed on tower four, and smashed through the reflector dish, causing significant damage, as seen in the image below. 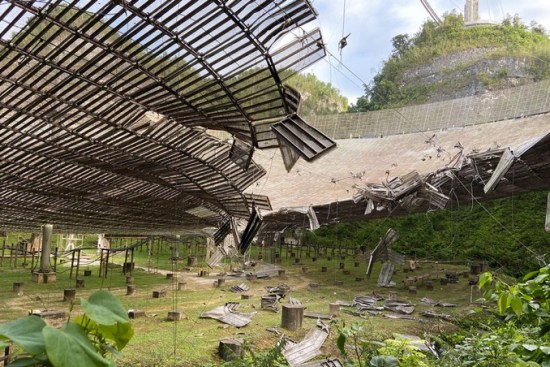 These auiliary cables were fastened with ‘spelter sockets’, and their failure is very rare, so this failure remains as of the time of writing, something of a mystery, especially as it failed at just 60% of it’s rated strength. Below is an image of a typical spelter socket. 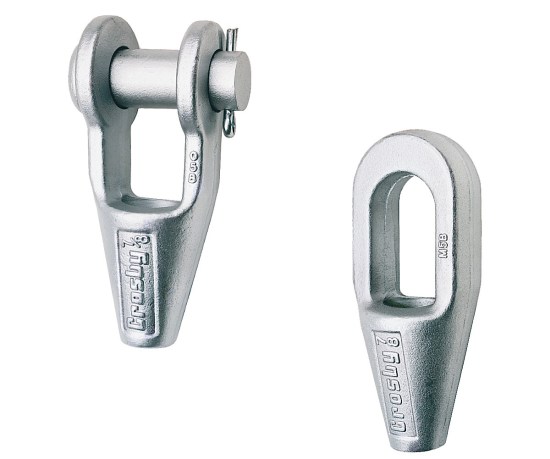 Connection involves splaying the individual wire strands inside the socket, and pouring molten zinc into it. The resulting joint should be stronger than the cable itself.

Suggestions at the moment are that the spelter sockets were incorrectly fitted.

An examination of the loss of the auxiliary cable concluded there was no immediate danger, and plans were made to replace it.

A laser survey revealed the corner of the platform attached to tower four dropped by two and a half feet after the failure of the auxiliary cable, which put yet more strain on the other cables on that tower.

In November 2020, a second cable failed at tower four, this time one of the original four. Drone footage of the top of tower four showed paint flaking off the other cables, a sure sign they were under severe stress.

This second cable failure was totally unexpected, as the cable simply broke partway along its length.

Various engineering options were discussed to add more support cables to tower four, but because of the fear of a catastrophic collapse, no people were allowed onto any part of the structure.

Part of the problem was the two broken cables, which were still attached to the antenna platform and hanging down, and their weight may have accelerated what happened next.

Engineering reports said there was no safe way to do any of the proposed work, as all of them required people on the towers and antenna platform. The National Science Foundation then proposed a controlled demolition of the entire structure, but before this could be implemented, events overtook them.

On the morning of December 1st, a drone was sent to inspect the cables on tower four, and it filmed a third cable failing, as seen in the images below, before and after the failure: 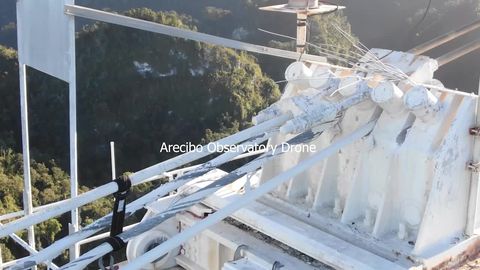 In the ‘before’ image, the middle cable of the three shows flaking paint and wire strands pulled loose. The broken strands of the first cable break can be seen on the top of what is known as the ‘saddle’, above the mounting points. 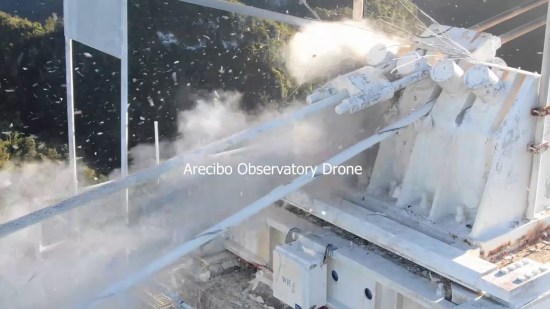 The moment of failure is captured in the image above. The cable appears to pull out of the spelter socket. Immediately after this cable failed, the paint came off the cable furthest away from the camera, and about a second later, it too broke away. The last of the original cables, put under a load far more than it was designed to take, failed a few seconds after that, followed by the remaining auxiliary cable.

The drone swung round just in time to film the antenna platform crash into the side of the reflector dish. All three support towers, having lost their balancing weight, failed, and the top quarter of each one, weighing hundreds of tons, came crashing to the ground. Tower eight, the tallest of the three support towers, can just be seen in one segment of footage, and the entire tower appears to have completely disrupted its concrete foundation from the pull of the backstays, as it is seen moving back towards the vertical. The top of tower eight blocked one of the site access roads when it fell.

The top of tower 12, right above the main observatory buildings, just missed the buildings when it fell, as it was pulled sideways. There was some damage to buildings from flailing cables and flying debris, but fortunately no injuries to anyone on site.

One of the suggestions as to the cable failure is that as Arecibo was not far from the coast, salt corrosion may have been a contributing factor.

Investigations are likely to take some time, possibly years, though it is deemed likely the addition of the heavy Gregorian Dome to the antenna platform was a significant contributing factor.

The main support cables were given a safety factor of two, meaning they should have been able to support twice the weight they did, but the facility was designed in the 1950s, long before computer-aided load-predicting modelling.

This video from Practical Engineering, goes into much more detail:

This video by Scott Manley shows frame-by-frame moments of the cable failures at tower four:

In the video above, records are shown that reveal loud noises from the direction of tower four were heard for several days before the collapse, and photographs below show paint repeatedly flaking off and wire strands breaking as the cables neared their failure points. 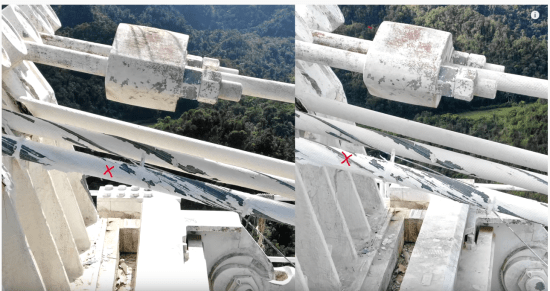 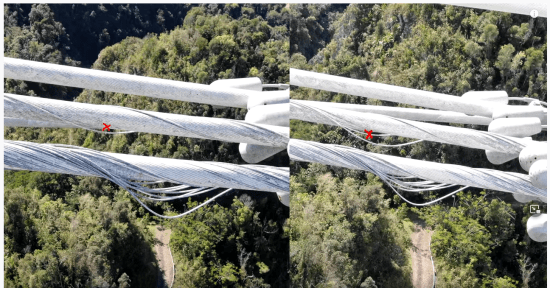 The final resting places of the collapsed antenna structure. 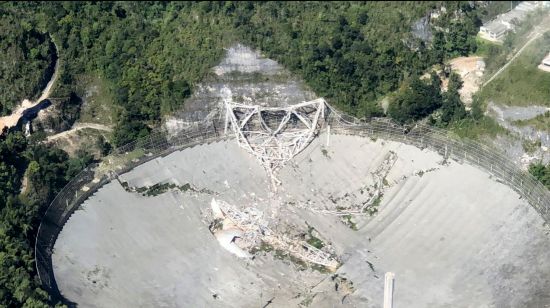 A close-up of the antenna platform wreckage. 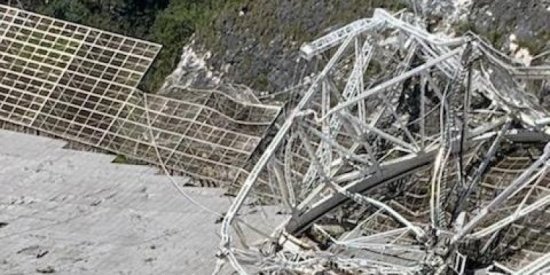 The image below shows the sheared tops of two of the towers. The rebar can be seen protruding from the fractures points, and it has been suggested there was not enough rebar fitted into the towers. 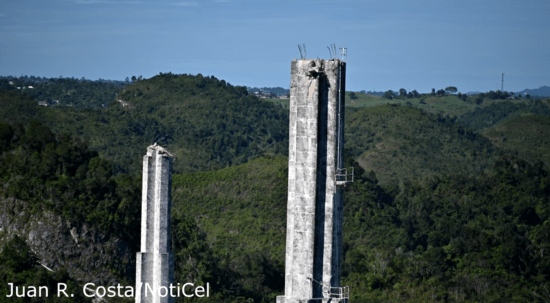 It would be great to think a new radio telescope could be built at Arecibo, but with the completion of the Five-hundred-meter Aperture Spherical radio Telescope in China in 2016, this may be wishful thinking.