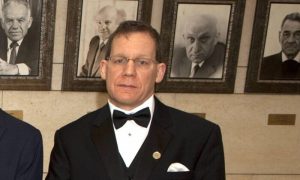 Winners of the 2012 Wolf Prize present their prize diplomas during an award ceremony in the Knesset (Israeli parliament) in Jerusalem on May 13, 2012. Winners (L-R); US Ronald Evans in Medicine, from Gene Expression Laboratory, The Salk InstituteUS, US Michael Aschbacher in Mathematics, from California institute of technology, US Luis Caffarelli in Mathematics, from University of Texas at Austin, Israeli Jacob D. Bekenstein in Physics, from Racah Institute of Physics, The Hebrew University of Jerusalem and Medicine, US Paul Alivisatos in Chemistry, from University of California at Berkeley and US Charles Lieber in Chemistry from Harvard University. The 100,000 dollar Wolf Prize is an international award granted in Israel, that has been presented most years since 1978 to scientists and artists. AFP PHOTO/MENAHEM KAHANA
(Photo credit should read MENAHEM KAHANA/AFP/GettyImages)