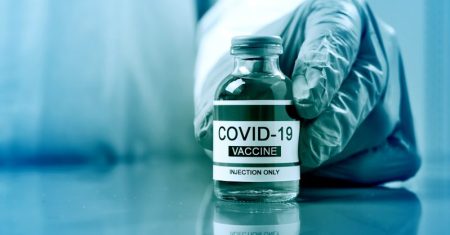 Two newly released studies show that – after a brief period of moderate protection – the experimental Covid-19 vaccines actually end up causing more illness than they prevent – especially when it comes to new variants like the now-predominant, and highly-mild Omicron.

The first study, a pre-print that was released on MedRXiv by a team of researchers in Denmark, shows that the experimental vaccines provide absolutely zero protection against Omicron beginning two months after vaccination (which they refer to as “peak” protection).

According to the study, the spread of the new Omicron variant was “likely” caused by “super-spreader events” “among young, vaccinated individuals.”

Somehow, the study’s authors still conclude that mass vaccination and the rollout of boosters is nessecary. 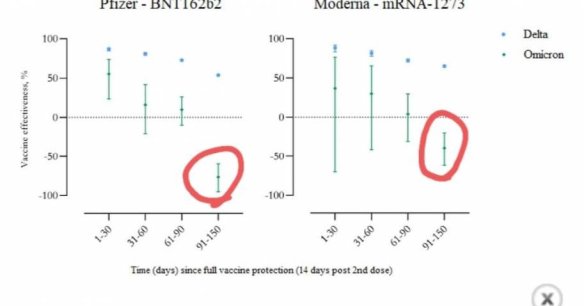 I kid you not, the last line of the study is still “these findings highlight the need for massive rollout of vaccinations and booster vaccinations.”

As if that wasn’t enough proof that this is the ‘pandemic of the vaccinated,’ the Canadian Covid Care Alliance – a non-profit government watchdog group of independent health care professionals – released a separate report this week that came to similar conclusions.

After examining Pfizer’s own vaccine clinical trial data, the CCCA team of experts also found that the Pfizer vaccine had serious negative protection against Covid, and so much so that they concluded the “vaccine causes more harm than good.”

The CCCA panel conducted a thorough analysis of Pfizer’s vaccine trial report from December 31st, 2020. The Pfizer report claims that the inoculations were safe and showed a robust 95% efficacy 7 days after the 2nd dose. But what researchers failed to mention was that the 95 percent was actually Relative Risk Reduction. Absolute Risk Reduction, which is what should have been factored in – especially if this vaccine is going to be mandated across the board, was less than one percent.

“The claim was that the inoculations were safe and showed 95 percent efficacy 7 days after the 2nd dose. But that 95 percent was actually Relative Risk Reduction. Absolute Risk Reduction was only 0.84 percent.”

For context, relative risk reductions only relate to a percentage reduction in one group compared to another, which can easily be misleading and over-exaggerate how helpful something is. Absolute risk reductions give the actual difference in risk between one group and another.

The report also shows that Pfizer had recorded an increased risk of illness – and even an increased risk of death – in individuals who had taken the vaccine compared to those who were in the placebo group – something that was also backed up by Pfizer’s latest clinical trial data that was published last month.

“Pfizer’s most recent report indicates an Efficacy of 91.3 percent. (Which means a reduction in positive cases compared to placebo group.)

But it also showed, compared to the placebo group, an increase in illness and deaths.

There is no benefit to a reduction in cases if it comes at the cost of increased sickness and death.”

“Severe adverse events” were up by 75 percent in the trial group that had received the vaccine.

Overall, adverse events that were attributed to the vaccine were an astounding 300 percent higher than in the placebo group. 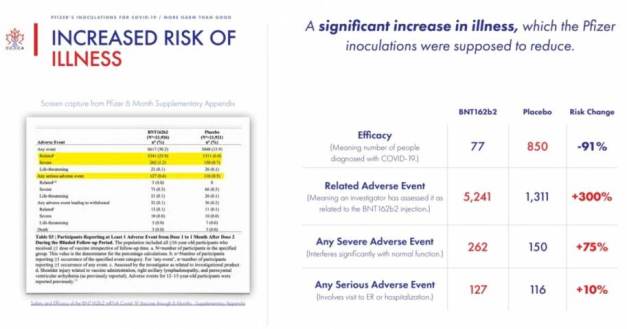 As for deaths, there were more who died in the vaccinated group – 20 out of 34 total. What’s even more concerning is that 9 of the vaccinated deaths were related to “cardiovascular events. 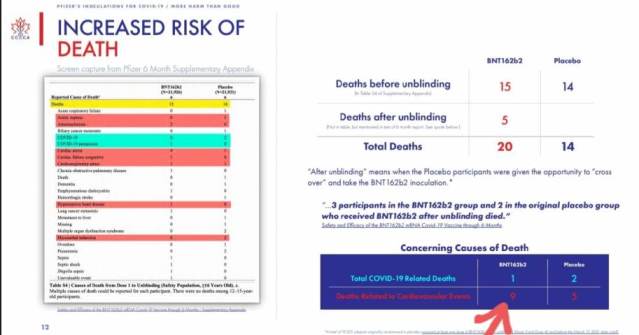 The CCCA panel also found several questionable and corrupt practices that were used when Pfizer compiled their report.

Not only did the vaccine maker downplay the side effects of the experimental jab, but they also did not follow established clinical trial protocols, had inadequate control groups that were mixed and unblinded early, and tested the jab on misleading demographics in order to generate the best results. 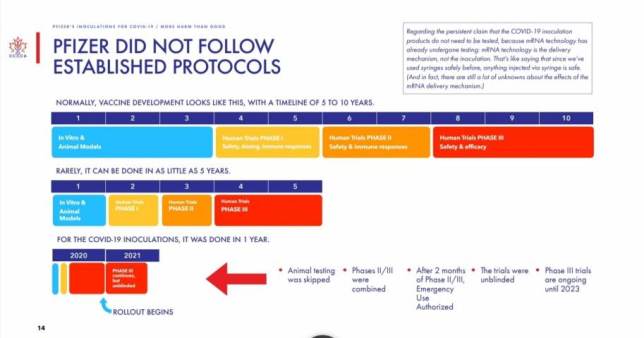 Instead of focusing the trials on the target population who could most benefit from a Covid-19 vaccine – a la the elderly and those with severe comorbidities – Pfizer chose participants from younger demographic that would be:

a) less likely to need a vaccine,

b) less likely to suffer an adverse event during a trial,

c) more likely to respond well to a vaccine, than the elderly who need protection against this virus.

Keep in mind, children and young adults have a whopping 99.995% recovery rate from this nominal virus. 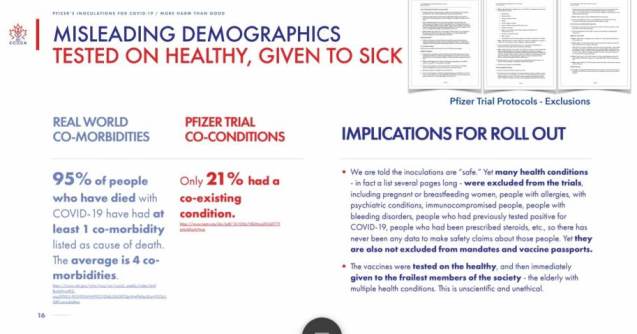 Additionally, because Pfizer unblinded their clinical trial groups early, they are unable to produce any relevant long-term safety data because they don’t have a control group for reference anymore.

By early 2021, nearly everyone in the study, even the placebo group, had been vaccinated, which effectively ended any hope for meaningful data. 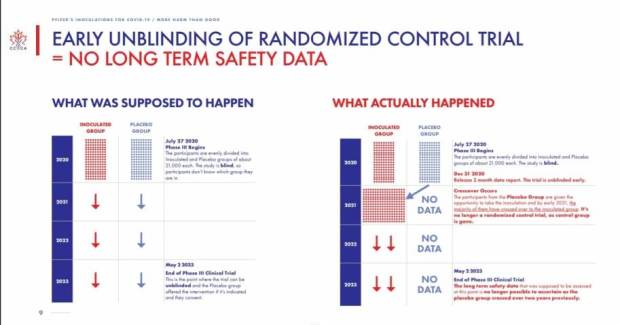 In what’s probably a glowing testament to its credibility, Dr. Robert Malone – the inventor of the mRNA vaccine – was permanently kicked off of Twitter for sharing the CCCA report last week.

If it’s getting censored, you know they are over the mark.