In a clear case of the mainstream narrative failing to translate into real-world perspectives, a strong majority of Black Americans believe their local police are doing a good job. This information comes from a recent CBS News/YouGov poll following the guilty verdict against former police officer Derek Chauvin. 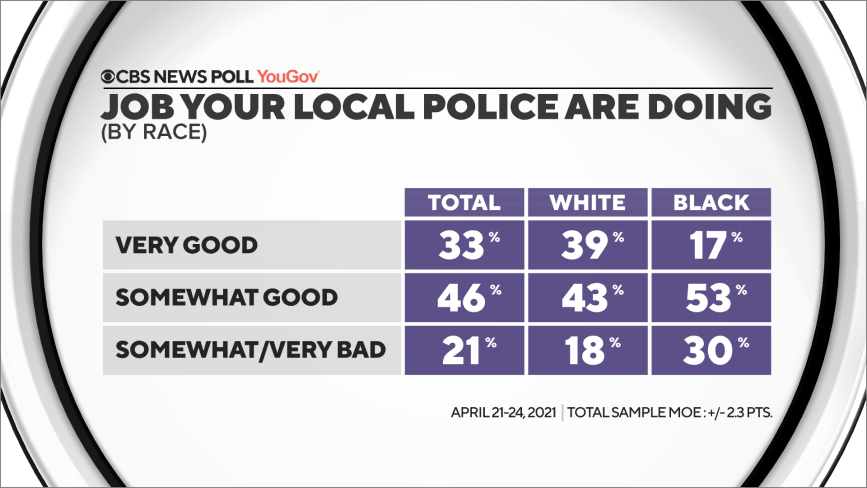 This runs contrary to the narrative coming out of the radical leftist circles who control most of mainstream media. By the reckoning of groups like Black Lives Matter and Antifa, all or most cops are bad and the American people support this notion. But their reckoning is clearly wrong on both counts. The vast majority of police officers in America have not received credible complaints of racism, police brutality, or inappropriate behavior unbecoming of a law enforcement officer.

This poll and others like it lend to the credibility of the notion that Black Americans feel very similarly to White Americans about police with only a 12% gap between them in their approval of local law enforcement’s job performance. It’s also interesting that CBS News/YouGov only highlighted White and Black respondents. What do Hispanics, Asians, Native Americans, or other racial groups think? It’s likely very similar.

As for Hollywood, who spent a night during the Academy Awards generally lambasting law enforcement and praising the conviction of Chauvin, is also experiencing a disconnect with their audience. The Oscars on Sunday were the lowest rated in the history of the award. According to National File:

Despite the fact that that nationwide lockdowns and a pandemic have left Americans with more time to watch television, the 93rd Academy failed spectacularly, bringing in less than half the viewership of the previous years’ Oscars, which also set an all-time low viewership record.

Chadwick Boseman, the “Black Panther” actor who died in 2020 and was celebrated by leftists for his roles as powerful black characters in political films, also failed to receive any awards despite the fact that the Oscars rearranged the order of its award categories in a bid to celebrate a hoped-for Boseman Best Actor win.

The viewership of the Oscars has steadily declined in recent years due to the over-politicization of the ceremony, however, the event still drew in over 43 million viewers in 2014. By 2020, that number had plummeted nearly in half to 23 million.

Despite the sentiment coming from the general population, Black Lives Matter continues to press their Neo-Marxist agenda through intimidation and violence. They believe (or at least pretend to believe) they have a mandate based on the outpouring of support they’ve received since the video of George Floyd being killed was released last year. They garnered over 3,000,000 donations totaling nearly $100 million last year. This apparent mandate has prompted them to take their rhetoric to new levels.

Reacting to the recent shooting of an armed black teenager in Columbus, Ohio, a group of BLM terrorists took to the streets to advocate the murder of police officers.

“We’re not gonna sit here and just sit around while you shoot and kills us and back to the suburbs. We’re sick…maybe it needs to be an eye for an eye,” one of the militant leftists said. “They shoot us. We shoot them! You shot us. We shoot you!”

Of course, the fact that another black teenager was saved from a brutal assault didn’t matter.

BLM activists call for assassinations of police in response to the Columbus shooting of an armed teenager. pic.twitter.com/U5TWhyI0iZ

In an ideal world, police officers would be able to spend most of their working time stopping and catching criminals. Today, BLM and other leftist groups want their attention elsewhere. But cops need to know most of us support them.

‘The Purge’ by Big Tech targets conservatives, including us

Just when we thought the Covid-19 lockdowns were ending and our ability to stay afloat was improving, censorship reared its ugly head.

For the last few months, NOQ Report and the American Conservative Movement have appealed to our readers for assistance in staying afloat through Covid-19 lockdowns. The downturn in the economy has limited our ability to generate proper ad revenue just as our traffic was skyrocketing. We had our first sustained stretch of three months with over a million visitors in November, December, and January, but February saw a dip.

It wasn’t just the shortened month. We expected that. We also expected the continuation of dropping traffic from “woke” Big Tech companies like Google, Facebook, and Twitter, but it has actually been much worse than anticipated. Our Twitter account was banned. Both of our YouTube accounts were banned. Facebook “fact-checks” everything we post. Spotify canceled us. Medium canceled us. Apple canceled us. Why? Because we believe in the truth prevailing, and that means we will continue to discuss “taboo” topics.

See also  Fmr. Obama official says US should implement a ‘no-fly’ list for the unvaccinated
Powered by Inline Related Posts

The 2020 presidential election was stolen. You can’t say that on Big Tech platforms without risking cancellation, but we’d rather get cancelled for telling the truth rather than staying around to repeat mainstream media’s lies. They have been covering it up since before the election and they’ve convinced the vast majority of conservative news outlets that they will be harmed if they continue to discuss voter fraud. We refuse to back down. The truth is the truth.

The lies associated with Covid-19 are only slightly more prevalent than the suppression of valid scientific information that runs counter to the prescribed narrative. We should be allowed to ask questions about the vaccines, for example, as there is ample evidence for concern. One does not have to be an “anti-vaxxer” in order to want answers about vaccines that are still considered experimental and that have a track record in a short period of time of having side-effects, including death. One of our stories about the Johnson & Johnson “vaccine” causing blood clots was “fact-checked” and removed one day before the government hit the brakes on it. These questions and news items are not allowed on Big Tech which is just another reason we are getting canceled.

There are more topics that they refuse to allow. In turn, we refuse to stop discussing them. This is why we desperately need your help. The best way NOQ Report and ACM readers can help is to donate. Our Giving Fuel page makes it easy to donate one-time or monthly. Alternatively, you can donate through PayPal as well. We are on track to be short by about $4100 per month in order to maintain operations.

The second way to help is to become a partner. We’ve strongly considered seeking angel investors in the past but because we were paying the bills, it didn’t seem necessary. Now, we’re struggling to pay the bills. We had 5,657,724 sessions on our website from November, 2020, through February, 2021. Our intention is to elevate that to higher levels this year by focusing on a strategy that relies on free speech rather than being beholden to progressive Big Tech companies.

During that four-month stretch, Twitter and Facebook accounted for about 20% of our traffic. We are actively working on operating as if that traffic is zero, replacing it with platforms that operate more freely such as Gab, Parler, and others. While we were never as dependent on Big Tech as most conservative sites, we’d like to be completely free from them. That doesn’t mean we will block them, but we refuse to be beholden to companies that absolutely despise us simply because of our political ideology.

We’re heading in the right direction and we believe we’re ready talk to patriotic investors who want to not only “get in on the action” but more importantly who want to help America hear the truth. Interested investors should contact me directly with the contact button above.

As the world spirals towards radical progressivism, the need for truthful journalism has never been greater. But in these times, we need as many conservative media voices as possible. Please help keep NOQ Report going.