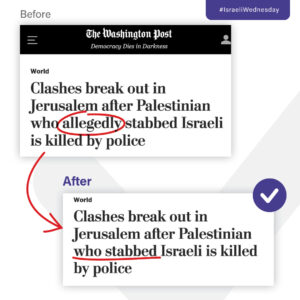 An Israeli woman was injured in an apparent Palestinian terrorist attack at the entrance of the Jerusalem neighborhood of Sheikh Jarrah on Wednesday morning. The suspect, a teenage girl who was subsequently arrested, reportedly attacked the woman while she was dropping her children off at school.

The victim was treated at the scene before being taken to Hadassah-University Medical Center. She was conscious and in stable condition.

Hamas immediately hailed the incident saying, “the heroic actions in the West Bank and Jerusalem, the most recent of which was the stabbing of a settler in Sheikh Jarrah, prove the greatness of our people whose resistance cannot be broken.”

Wednesday’s incident was seemingly the latest in a series of Palestinian attacks over the past two-and-a-half weeks.

The first occurrence in the apparent wave took place on November 17, when 16-year-old Amr Abu Assab stabbed two Border Police officers before being shot dead by an armed civilian.

Several days later, Hamas member Fadi Abu Shkhaydam carried out a deadly shooting attack in Jerusalem’s Old City, killing 26-year-old Eli Kay and wounding several others. That attacker was also shot dead by Border Police officers. That same day, a 67-year-old man was moderately injured after being stabbed repeatedly in the back by an 18-year-old Palestinian from the Jenin area in the West Bank.

A stabbing attack then took place on December 4 near the Old City’s Damascus Gate in Jerusalem. An Israeli civilian was moderately injured and the attacker was killed.

On December 6, a vehicular ramming attack was carried out by a 16-year-old Palestinian who accelerated into the Te’enim crossing near the West Bank city of Tulkarm with a stolen car. Guards at the crossing fired at the driver, fatally wounding him.

Israel has completed construction of an anti-tunnel barrier around the Gaza Strip, Defense Minister Benny Gantz announced. It took four years and $1.1 billion to build, and features sections both above and below ground that stretch across 40 miles.

“This barrier, a creative, technological project of the first order, denies Hamas one of the capabilities that it tried to develop and puts a wall of iron, sensors and concrete between it and the residents of the south,” Gantz said at a ceremony.

IDF Chief of Staff Lt. Gen. Aviv Kochavi called the new barrier “part of Israel’s defense philosophy of an ‘iron wall’ on land, in the air, at sea, and in general.”

Since the end of the Hamas-initiated conflict in May, Israel and the Palestinian terrorist organization that rules Gaza have been negotiating an extended ceasefire that would result in additional aid and international assistance flowing into the coastal enclave in exchange for calm.

The Israeli government is at the same time pushing for the return of the remains of two Israeli civilians and two fallen IDF soldiers held by Hamas.

The three countries have held multiple summits in recent years, but this is the first one with Bennett as Israel’s premier.

Jerusalem, Athens, and Nicosia are cooperating closely on projects to harness the power of natural gas from the Mediterranean Sea, as well as on security matters. The Israeli Prime Minister’s Office said the discussions also focused on tourism, climate change and the COVID-19 pandemic.

President Isaac Herzog stressed the importance of the trilateral meeting, calling it an “example of how nations should work for the benefit of the region,” and expressed hope that it could set an example for cooperation with Arab states.

Russia’s Foreign Minister Sergey Lavrov is scheduled to visit Israel this coming Sunday, his first trip to the Jewish state in three years. Lavrov is expected to meet with his counterpart Yair Lapid, as well as Prime Minister Naftali Bennett. Discussions will reportedly focus on the Iran nuclear talks, the situation in Syria, and other security issues.

In September, Lapid met with Lavrov in Moscow. At the time, Lapid communicated the Jewish state’s growing concerns over Tehran, declaring that “Iran is the world’s number one exporter of terror, and it threatens us all.”

In October, Bennett traveled to Russia for talks with President Vladimir Putin.

This week, the Israeli leader called on world powers to “take a strong line” against the Islamic Republic’s enrichment of uranium.

This week, a Palestinian terrorist attacked an Orthodox Jew near Jerusalem’s Damascus Gate. Security camera footage released within two hours of the event shows the assailant repeatedly stabbing the Israeli before being shot by Israel Border Police officers.

But while clear proof of the terrorist act was promptly made available, The Washington Post in its initial reporting nevertheless described the perpetrator as an “alleged Palestinian attacker” even while confirming his death.

Eventually, the headline was amended to read, “Clashes break out in Jerusalem after Palestinian who stabbed Israeli is killed by police.” But amid a Palestinian terror wave, The Washington Post and other major media outlets must do better.

See how you can help get the word out!