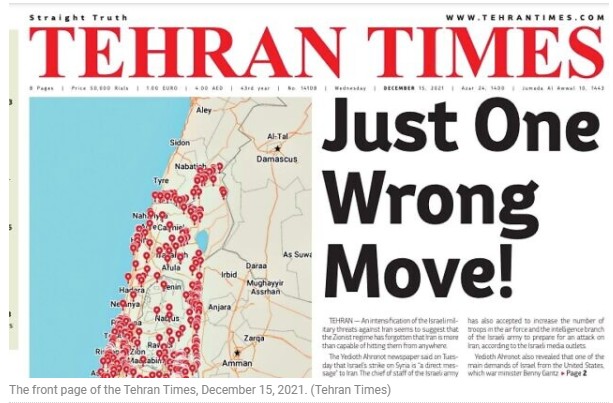 An Iranian newspaper published a map on Wednesday threatening Israel with missile attacks. In the image, pins representing rocket alerts appear on dozens of potential targets. Some of the pins, however, were placed in Lebanese territory and on Palestinian cities in the West Bank.

The map, published on the front page of the Tehran Times newspaper, was part of an article with the headline: “Just one wrong move!”

The piece ended with a quote by Iranian Supreme Leader Ali Khamenei from 2013 which warned that Iran would “destroy Tel Aviv and Haifa” if Israel “makes a mistake” and conducts a military strike.

The threat against the Jewish state comes as three European powers said on Tuesday that “we are rapidly reaching the end of the road” to save the 2015 Iran nuclear deal.

“We are nearing the point where Iran’s escalation of its nuclear program will have completely hollowed out the JCPOA,” France’s ambassador to the United Nations, Nicolas de Riviere, said at the world body, reading a joint statement from Britain, France and Germany.

US Secretary of State Antony Blinken said Washington continues to pursue diplomacy with Iran because “it remains, at this moment, the best option,” but added that it was “actively engaging with allies and partners on alternatives.”

Indirect talks between Tehran and Washington started in April but stopped in June after the election of hardline cleric Ebrahim Raisi, whose negotiators returned to Vienna after five months with an uncompromising stance.

Israel is pushing for a tough policy if diplomacy fails to rein in Iran’s nuclear program.

Hamas is increasingly pushing for conflict in the West Bank as a result of the limited options available to the terrorist organization for attacking Israel from the Gaza Strip, a former Shin Bet (Israel Security Agency) officer told local media.

“Part of their [Hamas’] preparations for such a scenario is raising tensions in the West Bank — recruiting people, funding and maximizing their options to extend future conflicts into the West Bank and Jerusalem,” Adi Karmi said during an interview on Tuesday.

Palestinian prisoners from the West Bank who were released in the Gilad Shalit deal with Israel are now living in the Gaza Strip, and are using their personal connections in the West Bank to send money to help organize local Hamas terrorist cells, Karmi explained.

The Shin Bet says that the domestic security and intelligence services prevent about 500 terrorist attacks against Israel every year.

Hamas is also active in other countries, including Turkey and Lebanon, in efforts to recruit terrorists, Karmi emphasized.

A bill to ban the Boycott, Divestment, and Sanctions movement in Britain will soon be presented to Parliament. MP Robert Jenrick, a member of Prime Minister Boris Johnson’s Conservative Party, made the comments during the Leadership Dialogue Institute (LDI) 2021 online conference.

Jenrick said: “I think we’re beating BDS here. Today, there is no political party in the UK to support BDS, and this is becoming an increasingly fringe activity, adding: “What we want to do is pass legislation here, and I’m pretty confident it will be in the legislative program the spring of next year.”

Several countries and US states have adopted measures against the BDS movement, opting to divest from companies that engage in the practice.

“There’s a question of how broad that law can be, obviously I want it to be as broad as possible, so there’s next to no avenue that BDS could continue,” Jenrick said.

Israeli researchers announced on Tuesday that they have uncovered a key mechanism that causes the neurodegenerative disease ALS, which may unlock a way to delay or reverse the condition that affects thousands of people annually.

The team from Tel Aviv University, along with researchers from Sheba Medical Center and from institutes in Germany, France, the UK and US, found that a buildup of a protein called TDP-43 near neuromuscular junctions, which translates neural signals into motor activity, causes motor neurons to degenerate and die by inhibiting mitochondrial production.

This in turn leads to amyotrophic lateral sclerosis, also known as Lou Gehrig’s Disease, which causes sufferers to lose the ability to walk, talk or even breathe.

By using an experimental molecule to break down TDP-43 in animals, the scientists were able to restore motor neuron activity, opening the door for possible drugs that can cure ALS in humans if found before the damage becomes too severe, the researchers said.

ALS has no approved drug treatment. 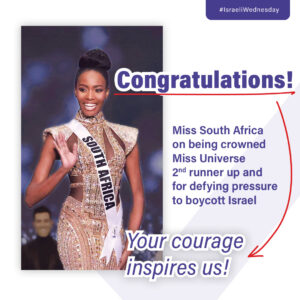 This year’s Miss Universe Pageant was targeted by proponents of the Boycott, Divestment and Sanctions movement that aims to demean and isolate the Jewish state ever since Israel was announced as the competition’s host country in July.

But this year’s Miss Universe Pageant also had a heroine…