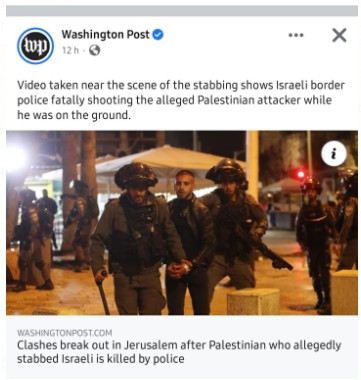 The facts of the case are irrefutable.

On December 4, a terrorist stabbed a Jewish man near Jerusalem’s Damascus Gate. The assailant, a Palestinian, was then shot dead by Israeli security forces.

Yet The Washington Post (WaPo) presumed the attack was ‘alleged’ while confirming that the perpetrator had been killed.

To its credit, WaPo eventually corrected its inaccurate headline.

The facts of the case are clear.

A terrorist stabbed a Jewish man in Jerusalem. The Palestinian assailant was then shot dead by Israeli security forces.

Yet @washingtonpost called the attack ‘alleged’ while confirming that the perpetrator had been killed.https://t.co/monEBJxESI 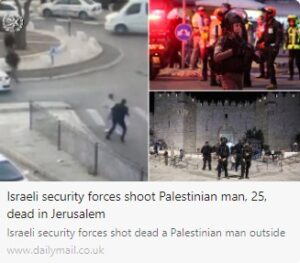 And this headlong rush was joined by anti-Israel groups such as B’Tselem, which falsely accused the Jewish state of gross misconduct.

Contrary to the sanitized terminology Israeli authorities and media use, the assailant wasn’t “neutralized”. He was summarily executed. https://t.co/SexgNAAsvf

The Washington Post piece, written by Shira Rubin, proposes, based on a fragment of footage of the incident that, “…Israeli border police shoot the Palestinian man several times, although he was on the ground and apparently incapacitated.” The article only then makes clear that a much longer and contextual video released by the Israel Police showed the “Palestinian man crossing the street, turning to stab the ultra-Orthodox man as he passes, then lunging at Israeli police officers before being shot and ultimately killed by them.”

The stabbing attack today at Damascus Gate in Jerusalem pic.twitter.com/BiomqC27wA

Join the fight for Israel’s fair coverage in the news

When you sign up for email updates from HonestReporting, you will receive
Sign up for our Newsletter:

I suggest that nobody rush to pass judgment on the conduct of fighters in complicated situations on the ground in the face of terrorism. It is always better to wait a moment.

“In any case, the full video leaves no room for doubt, the officers acted in an exemplary manner, exactly as is required of fighters in such an operational situation.”

By even mentioning an incomplete video, The Washington Post casually lent credence to the assertions of such antisemites as The Nation’s “Palestine Correspondent,” Mohammed El-Kurd.

I share this video with so much hesitation, mainly worried about his loved ones. But it’s important to document, to expose the oblivious world to the state-sanctioned shoot-to-kill attitude of the Zionists. This is not normal, it’ll never be. It should enrage you…

Not surprisingly, Palestinian Authority President Mahmoud Abbas denounced the shooting as an “assassination” and urged the international community “to immediately act to stop Israel’s crimes.”

Others, too, prematurely jumped onto the anti-Israel bandwagon:

I don’t know the full context here, but what’s undeniable is that a Palestinian who is lying on the ground was repeatedly, slowly & deliberately (not in a panic) shot by Israeli occupation soldiers who have no business being in occupied East Jerusalem in the first place! https://t.co/N1t3fuoODx

Omar Baddar is a ‘political analyst’ with more than 33,000 Twitter followers.

And this was retweeted by Ahmed Eldin, an ‘Emmy-nominated journalist’ with almost 82,000 followers on Twitter:

The Palestinian man who was executed this evening in Jerusalem is Mohammad Shawkat Salima from Salfit, occupied West Bank.
He arrested Jan 2020 by Israeli Occupation Forces at Za’atara checkpoint, on junction leading to Salfit & several illegal Jewish settlements including Ariel. pic.twitter.com/DQgmkXzg0Z

Another popular member of the anti-Israel Twitterati is someone who goes by the moniker of ‘Jalal.’

Distorting images to spread falsehoods about the Israeli-Palestinian conflict is nothing new. One famous example is the now-suspect footage of 12-year-old Gazan boy Muhammed al-Durrah being depicted as being killed by Israeli troops.

Even though this and other alleged incidents of Israeli brutality have been discredited over the years, the reaction on social media to Israeli security forces killing a Palestinian attacker after he had stabbed a civilian on December 4 shows that doctored images continue to be an effective propaganda tool for those wishing to smear the Jewish state.

Indeed, the al-Dura affair gave rise to an entire new industry, Pallywood, a fusion of “Palestinian” and “Hollywood.”

Yet The Washington Post and other media outlets (see here and here) seem all too willing to incorporate repackaged images of dubious origin into their reporting.

A study by three MIT scholars has found that false news spreads much more rapidly on the social network Twitter than real news does.

False news stories are 70 percent more likely to be retweeted than true ones. It also takes true stories about six times as long to reach 1,500 people as it does for false stories to reach the same number of people.

Even in a 24/7 news cycle, The Washington Post is not absolved of fulfilling its primary obligation to its readers: Get the facts right. By doing so, WaPo and other major news publications will be able to distinguish themselves from instantaneous and unsubstantiated hearsay, at best, and antisemitism, at worst, that prioritizes clicks over the accuracy of content.

Learned something new here? Please take a moment to share this article on social media and follow the Israel In Focus page on Facebook to read more articles explaining Israel’s history, politics, and international affairs. Click here to learn more!