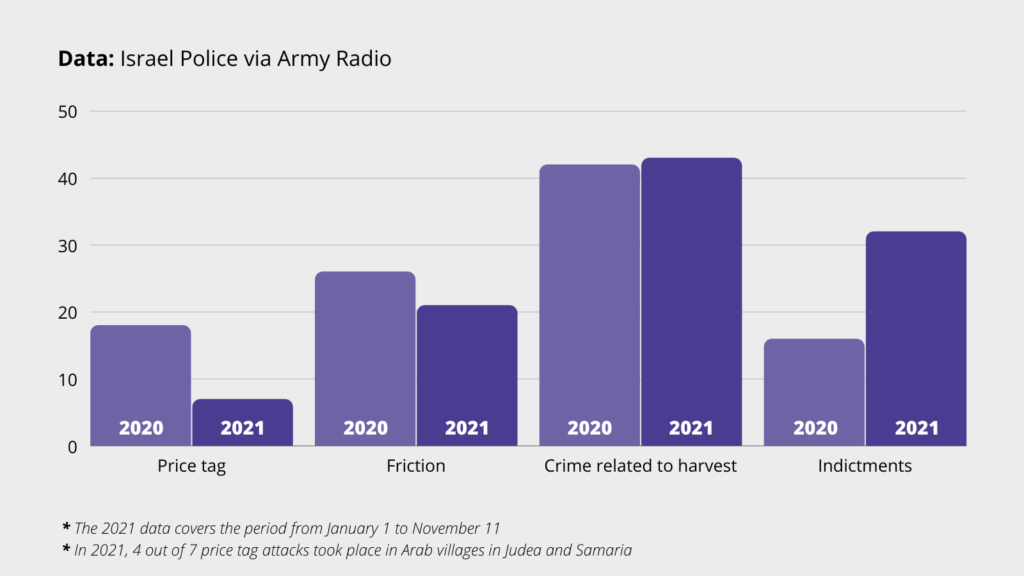 “Hate crimes are the root from which terrorism grows and we must uproot it.” — Israeli Defense Minister Benny Gantz

“Our resistance in the occupied lands is against all the occupation’s symbols. Whether it is the [Jewish] settlers, their farms, their army, or all their brats and the like.” — Fatah [ruling Palestinian faction] Central Committee Secretary Jibril Rajoub

These two quotes lay bare the stark contrast between how Israelis and Palestinians view violence against civilians in the West Bank, a territory also known by its biblical name Judea and Samaria. Israeli officials have strongly condemned what some have called Jewish acts of “terror.” Meanwhile, the Palestinian leadership explicitly encourages and supports attacks on all Israelis, including Jews living in communities beyond the Green Line.

However, considering the way many media organizations report on the issue, one could be forgiven for thinking the opposite is true.

So far this year, 23 of the most widely-read global publications and press agencies, including The Washington Post, the Associated Press, The Guardian, CNN and others, produced 45 reports on the issue of Israeli “settler violence.” The prevailing narrative is that 2021 has seen a “drastic surge” (The Independent) in attacks committed by Jews against Palestinians and that Jerusalem has been “using settler violence as a ‘major informal tool’ to drive Palestinians from farming and pasture lands” (Associated Press).

Indeed, the world’s leading news outlets in 2021 have published more articles on Jewish violence in the West Bank than in the previous three years combined (41). Nevertheless, while several widely-condemned incidents did take place in recent months, a review of official data does not necessarily lead to the conclusion that the phenomenon has substantially increased.

That said, HonestReporting has repeatedly stressed that all violence against civilians must be condemned full stop no matter the perpetrators.

But any analysis or debate of the issue should be grounded in facts.

Indeed, it’s time to delve deeper into the matter of “settler violence.”

Join the fight for Israel’s fair coverage in the news

When you sign up for email updates from HonestReporting, you will receive
Sign up for our Newsletter:

According to official figures released last week, the Israel Police between January 1 and November 11 recorded 21 occurrences of “friction” (a unique statistical category) among Israelis and Palestinians in the West Bank — a 19.2 percent decrease over the previous year. Moreover, police registered a 61% decline in so-called “price tag attacks” that generally target Arab property.

The police did not provide any official data on stone-throwing attacks on Palestinian vehicles. Two years ago, an Israeli minor from Kokhav Hashahar was indicted for killing a Palestinian woman by throwing a rock at the car in which she was traveling.

In the context of the latest October-November harvest season, police recorded 43 incidents of “nationalistic crime” (another category), an increase of one compared to 2020. At the same time, the report noted that the number of indictments for anti-Arab hate crimes had doubled, with 32 charges filed against Israeli residents of Judea and Samaria.

“[Jewish] activists are more afraid and more cautious,” a police spokesperson was quoted by Army Radio as saying. He mainly attributed the overall drop in all “settler” incidents in the West Bank to the use by Israeli security forces of administrative orders and other “secret instruments” against Jewish extremists.

Perhaps most importantly, while the number of reported events remained fairly consistent over the past year, the incidence of Jewish perpetrators being indicted increased significantly, suggesting that the Israel Police is making a concerted effort to stamp out the phenomenon.

This, of course, runs totally contrary to the prevailing media narrative.

While police statistics are inexact given that cases may go unreported, they do provide a general overview of the existing reality and trends. But the situation is incredibly nuanced and difficult to fully encapsulate. For example, IDF data released earlier this month showed 67 episodes of “settler violence” within the context of the Palestinian olive harvest, but Israeli journalists quickly pointed out that the defense establishment includes in its figures complaints that were ultimately disproven (some 10-15 cases this year).

[UN-OCHA]…presents [Palestinian] terrorists as victims and lists Israelis stabbed to death in their homes, out shopping, or waiting at bus stops, as fatalities of ‘settler violence.’”

Despite the ambiguity, news reports have near-uniformly presented as fact that Jewish-initiated disturbances are on the “rise” (NBC News); have seen a “steep increase” (The Washington Post), or have “spike[d]” (Foreign Policy). Most of the articles that mention “settler violence” (29 out of 45) are evidently rooted in reports by EU-supported fringe NGOs.

In late 2019, Brussels allocated over $335,000 to a project named “A Symbiotic Relationship in the West Bank: Holding Israeli Authorities Accountable for Settler Violence,” which over the past two years has been spearheaded by B’Tselem and Breaking the Silence, which many observers deem overtly anti-Israel (see here, here, here, here, here, here and here). One of the objectives of the grant was to “expose international and Israeli decision-makers and the public” to alleged human rights violations “perpetrated by settlers against Palestinians.”

For its part, B’Tselem has from the beginning of 2020 to September of this year documented 451 total instances of what it refers to as “settler attacks on Palestinians and on their property.” HonestReporting was unable to find amalgamated data from the organization on the number of such incidents over the previous two-year period.

By contrast, the Shin Bet (Israel Security Agency) in October 2021 alone recorded over 100 Palestinian terror attacks in Judea and Samaria. In 2020, the security agency registered almost 800 acts of Palestinian terrorism in the territory. Another 424 “significant attacks” were thwarted.

Nevertheless, the media’s coverage of “settler violence” has skyrocketed — even as the related statistics remain relatively steady and are dwarfed by the incidence of Palestinian violence — with headlines claiming that the Israel Defense Forces is “complicit” in harming Palestinians, and articles promoting the notion that Israeli radicals are “not defying the state; they are doing its bidding.”

This, even though Israeli Foreign Minister Yair Lapid and Defense Minister Benny Gantz recently vowed to bring Jewish “terrorists” to justice, and that the Israeli parliament recently convened a meeting precisely to discuss the issue.

When considering the increased number of police indictments, this seems to the case.

What also goes unmentioned is that individuals connected to B’Tselem and Breaking the Silence have more than once been accused of fabricating events (see, for instance, here and here). According to testimony by former IDF soldiers, B’Tselem activists even join forces with Palestinian rock throwers. Its “investigations” and statements — often adorned with the EU logo — have nevertheless been taken at face value by publications worldwide.

The European Union plays a questionable role in promoting the dubious narrative in more than one way. Already in 2011, a position paper produced by EU officials in Ramallah and Jerusalem posited that “the absence of protection or legal remedy” against violence drives Palestinians to “increasingly support other means [emphasis added] in an effort to improve their situation.”

Fast-forward to November 17, when the EU delegation to the Palestinian Authority alleged on Twitter that it had witnessed “several Israeli settlers” hurling stones at passing vehicles. “Such attacks should be prevented and the perpetrators swiftly brought to justice,” the post read.

In response to questions by HonestReporting, an EU official in Tel Aviv provided the following statement:

On Wednesday [November 17], at around 12:20 pm, a group of Israeli settlers were throwing stones at passing cars on a busy road in the vicinity of Route 60 near Mihkmas Junction. A staff member of the Office of the European Union Representative in East Jerusalem was returning from Ramallah to East Jerusalem in an EU vehicle that was nearly hit by stones, but the driver managed to turn around and leave the scene. Some of the vehicles in front of the EU vehicle were hit by stones. The incident was reported to the Israeli authorities.”

However, the official did not respond to queries about how, exactly, the assailants’ identities were confirmed. In the past, Palestinian rock-throwers, looking to target cars with Israeli license plates, have hit Palestinian and United Nations vehicles.

As part of HonestReporting’s investigation, an Israeli police spokesman said that while various complaints about stone-throwing in the same vicinity had indeed been registered, no suspects were found. “It’s an area where there are both Arabs and Jews, and there’s no way of knowing who committed the act,” the spokesman emphasized.

Despite the apparent lack of evidence, the accusatory EU social media post quickly garnered over 150 retweets, including from Human Rights Watch’s Omar Shakir; an employee of Al-Haq; a CUNY professor; and multiple European envoys to the Palestinian Authority.

This tweet was swiftly shared by anti-Israel orgs like @HRW & reported in Palestinian media. But there’s something fishy about the story.https://t.co/Otk3mdl9JY

As aforementioned, the EU tweet came amid rampant Palestinian attacks across Judea and Samaria. “We are experiencing an increase in stone-throwings and other terror incidents by Arab rioters,” Binyamin Regional Council mayor Israel Ganz wrote on Facebook on November 19, pointing out that several Jewish residents of Ma’ale Levona — located 12 miles south of Nablus — had suffered injuries over the previous week.

In fact, on the day of the EU tweet, an Israeli girl was reportedly wounded in an Arab rock-throwing attack near the community of Alon Shvut. Around the same time, an Israeli bus was struck in the vicinity of Ma’ale Levona in what local sources said was the seventh similar incident in 24 hours. A day later, Palestinians from A-Lubban a-Sharqiyah were caught on video throwing rocks at Israelis. The Palestinian campaign of violence continued into this week when the driver of a bus from Jerusalem to Ma’ale Adumim was hit by shrapnel on Sunday evening.

Strikingly, the EU, B’Tselem and Breaking the Silence have yet to issue reports on or condemn this.

Line 165 from Jerusalem to Ma’ale Adumim was stoned this evening near Wadi Jouz:
The glass was damaged, the driver was slightly injured by a shrapnel in his eyes.

HonestReporting has over the last months produced a series of investigations (see here, here and here) on Palestinian Authority-supported terrorism targeting the Jewish population in Judea and Samaria, and we have repeatedly called on the EU to denounce this senseless violence.

To date, Brussels has yet to do so, although HonestReporting’s work did prompt the Dutch foreign minister to condemn Ramallah’s backing for antisemitic attacks.

The European Union can either act as an unbiased arbiter that strives to further peaceful coexistence between Israelis and Palestinians, in which case it should condemn all extremism, or it can promote a one-sided narrative that blames the Jewish state for the complex and often volatile situation in the disputed territories.

And, of course, the same principle of neutrality applies to the media, which should report the whole story instead of pushing dubious claims that are not fully supported by data.

I don't necessarily endorse all content from this site but it's always good to get different perspectives. https://honestreporting.com/its-time-for-a-fact-based-conversation-about-israeli-settler-violence/