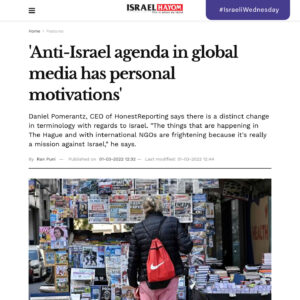 Israel has recorded its highest-ever number of new coronavirus infections — driven by the ultra-contagious Omicron variant — the government reported on Wednesday.

The record of 11,978 cases diagnosed on Tuesday marks the most new infections reported in a single day since the start of the pandemic. The previous record was set on September 2 with 11,345 new infections logged during the Delta variant’s wave. Omicron, first detected in South Africa, is apparently more contagious but causes less cases of severe illness and death — especially among vaccinated people.

Over the past week, the number of daily cases in Israel has risen by 241.9 percent with 39,361 infections. Meanwhile, the 69 new serious cases over the past seven days represents an increase of 35.3 percent. The number of active patients in Israel stands at 45,580.

Meanwhile, preliminary findings of an Israeli study have found that a fourth dose of the COVID-19 vaccine boosts antibodies fivefold a week after the shot is administered. The Health Ministry on Sunday approved an additional shot for people over 60. Since Monday, which marked the first day of the vaccination drive, more than 100,000 people have either received or booked an appointment to receive the fourth inoculation.

“The State of Israel not only protects its own people and its own citizens, the State of Israel is truly at the forefront of research on the issue of COVID-19, ‘For out of Zion shall the Torah come forth,’” Prime Minister Naftali Bennett said during a visit to Sheba Medical Center on Tuesday in response to the study’s initial findings.

Israel’s military on Tuesday announced that it had shot down a Hezbollah drone, according to an announcement from the army’s official Twitter account.”The drone was tracked by the aerial control units for the entire duration of the event,” the country’s armed forces explained, adding that the device had entered Israel after crossing Lebanon’s border.

There was no immediate response from Hezbollah or media outlets linked to the terrorist organization.

“The IDF will continue to act in order to prevent any violation of Israel’s sovereignty,” the IDF declared following the incident.

In August, the Israeli military announced that it had downed a drone belonging to Hezbollah, days after the largest exchange of fire on the border since the 2006 Second Lebanon War between the Jewish state and the Iran-backed terror group.

Tuesday’s incident came a day after the anniversary of the United States drone strike that killed Iranian Quds Force commander Qassem Soleimani, who was responsible for the Islamic Republic’s overseas terrorist operations and the backing of armed groups such as Hezbollah.

The leading candidates to normalize ties with Israel next are the Muslim-majority island nations of The Comoros and Maldives, according to diplomatic sources.

The Comoros, a small archipelago in the Indian Ocean, has never recognized the Jewish state, but Jerusalem confirmed last October that Washington had brought Comorian and Israeli officials together to discuss normalization.

The Maldives once had diplomatic ties with Israel, which was the third country in the world to recognize the island republic. However, relations were suspended in 1974. In 2020, Maldivian officials denied local reports they were in talks with Israel about reestablishing ties.

US Secretary of State Antony Blinken last week discussed with senior Indonesian officials the possibility of the world’s largest Muslim country establishing diplomatic ties with Israel. At an event marking the one-year anniversary of the Abraham Accords, Blinken pledged that the Biden Administration would actively work to support and expand the growing diplomatic ties between Israel and Arab nations.

A rabbi who worked for the BBC for decades has tendered his resignation from the British Broadcasting Corporation in response to its handling of a story about a Hanukkah night attack on a group of Jewish teens.

Rabbi YY Rubinstein, who appeared on many BBC programs including a religious affairs show on BBC Radio Two, wrote in a resignation letter shared on Facebook: “This is a very sad moment for me as I have been a BBC broadcaster for some 30 years. … The current crisis over antisemitism at the corporation and its attempts to turn the victims of the recent antisemitic attack on Jewish children in London and claim that the victims were actually the perpetrators, was and is inexcusable. The obfuscation, denial that followed, was and is utterly damning…I simply don’t see how I or in fact any Jew who has any pride in that name can be associated with the corporation anymore.”

His decision to leave follows widespread criticism stemming from a broadcast in which BBC staff depicted the teenage victims of a November 30 antisemitic attack on a busy London street during Hanukkah as the perpetrators. Video clips of the incident show men attacking the bus that was taking the teens to an event. In its on-air reporting, BBC stated that the Jewish teens made racial slurs against Muslims, despite there being no evidence to support the claim.

#IsraeliWednesday: HonestReporting CEO Daniel Pomerantz was recently featured in Israel’s most widely distributed newspaper, Israel Hayom. During the interview, Pomerantz revealed that a distinct shift is taking place with regards to the way global media are covering Israel and the regional conflict. What’s behind the change? How is HonestReporting countering it?

Find out and share how HonestReporting is taking on biased coverage of Israel.