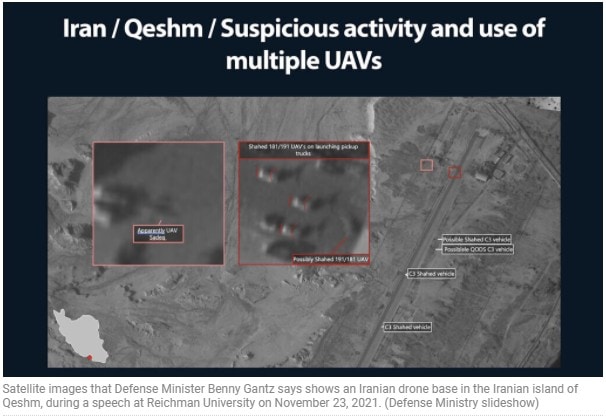 Defense Minister Benny Gantz revealed the locations of two Iranian drone bases that he said were used to conduct attacks against targets at sea in recent months. According to the defense minister, one of the sites is located in the area of Chabahar and the other is situated on Qeshm Island, just off the coast of the Iranian mainland.

“I want to stress to you that unmanned aerial vehicles are a precision weapon, which can reach strategic targets throughout the world. Most of the drone attacks that we’ve seen so far have been from southern and southeastern Iran against targets at sea,” Gantz said. In his speech, the defense minister noted Iran’s use of proxies across the region, in Syria, Yemen, Lebanon and Iraq.

Over the past year, Israel and Iran have been engaged in something of a shadow war at sea, with Tehran allegedly conducting a number of attacks on Israeli-owned or Israeli-linked vessels sailing through the Persian Gulf and the Gulf of Oman.

Gantz’s remarks came less than a week before indirect talks are due to resume between Iran and the United States regarding a mutual return to the 2015 nuclear deal. Israel has staunchly advocated against an American return to the accord, which Jerusalem believes is far too weak and paves the way for Iran to develop a nuclear weapon.

The US has reportedly rejected Israel’s activities against Iranian nuclear facilities, believing such actions to be ultimately unhelpful as they only serve to encourage Tehran to upgrade those facilities in response.

Defense Minister Benny Gantz, who is visiting Morocco to cement security ties, signed a landmark agreement paving the way for weapons sales to the North African kingdom. In a meeting with his Moroccan counterpart Abdellatif Loudiyi, the Israeli defense minister inked a defense memorandum of understanding.

Gantz and Loudiyi agreed to formalize security collaboration with an MOU outlining plans to establish a joint committee that will explore ways to expand cooperation across various areas, such as intelligence sharing, research, and joint military training. The memo further allows Israeli defense firms to do business with Morocco.

Gantz’s two-day tour – the first official visit by an Israeli defense minister to an Abraham Accords partner – comes just ahead of the first anniversary of their agreement to establish full diplomatic relations. Morocco, the United Arab Emirates, Bahrain and Sudan signed agreements to normalize ties with Israel in 2020 as part of the diplomatic pacts brokered by the Trump administration known as the Abraham Accords.

Israel and Morocco enjoyed low-level diplomatic relations in the 1990s, but Morocco severed them after a Palestinian uprising erupted in 2000. Despite that, the two states have maintained informal relations. Nearly half a million Israelis claim Moroccan heritage – more than 200,000 immigrated to Israel after the founding of the state in 1948 – and thousands visit the country each year.

Canberra has declared the entirety of Hezbollah a terrorist organization, Australian Home Affairs Minister Karen Andrews announced on Wednesday. “We know that there are individuals actively watching what is happening in Australia. There are people here who have the intent and the capability to do us harm,” Andrews said in a statement.

Australia had previously only designated Hezbollah’s External Security Organization a terrorist organization in 2003. It now becomes the 17th country to consider the entirety of the group as such, joining the US, UK, Israel, Canada and Germany, among other nations.

Andrews explained that the Iran-backed Hezbollah is both a terrorist threat and a supporter of Palestinian Islamic Jihad and the Izzadin al-Qassam Brigades, the armed wing of Hamas.

I welcome Australia’s intent to declare Hezbollah a terrorist organization in its entirety.

Hezbollah is an Iranian-backed terror organization in Lebanon responsible for countless attacks in Israel & around the world.

Thank you to my friend @ScottMorrisonMP for your leadership.

Last weekend, United Kingdom Home Secretary Priti Patel announced that she had “acted to proscribe Hamas in its entirety.” While London in 2001 blacklisted the Izzadin al-Qassam Brigades, it had refrained from banning Hamas’ “political wing,” thereby enabling the Gaza Strip’s rulers to continue raising funds and building infrastructure in the UK. Prime Minister Boris Johnson’s government is hoping for the move to be approved this week and take effect on November 26.

Similar to Australia’s move on Hezbollah, the final decision regarding Hamas was apparently made following talks earlier this month between Prime Minister Bennett and Johnson on the sidelines of the COP26 climate change summit.

HonestReporting some three months ago called on the UK to fully proscribe Hamas and created a call to action to that end.

The chief legal officers of 12 US states are urging Ben & Jerry’s to reverse its boycott of Israel in the West Bank, calling the ice cream company’s move “economic warfare.”

New York, New Jersey, Texas, Arizona and Florida have announced the withdrawal of hundreds of millions of dollars in pension investments from Unilever — the parent company of Ben & Jerry’s. The states have also enforced laws against the Boycott, Divestment and Sanctions movement against Israel.

“We, the attorneys general of our respective states, write today to express our grave concerns about Unilever’s decision to engage in a boycott of the State of Israel. Not only is Israel one of our nation’s closest and most reliable allies, but it is also the only democratic nation in the region and has long been a force for peace and stability,” they said.

The letter notes that 33 states have passed anti-BDS statutes that “prohibit investment of public pension funds or the awarding of government procurement contracts to companies that boycott Israel.”

The chief legal officers also argued that Unilever can’t sidestep responsibility by claiming B&J is governed by an independent board that can impose such a “radical” act on its own. “The assertion that the tail wags the multi-billion dollar corporate dog strains credulity,” the letter says. 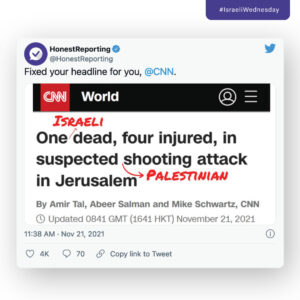 The facts were clear: A Palestinian gunman on November 21 opened fire in Jerusalem’s Old City, killing one Israeli and injuring several more. Yet, CNN and other news outlets mangled their headlines by blurring the distinction between the Hamas terrorist and his victims.

We took immediate action: Our related article and accompanying social media post went viral, the latter having reached some 450,000 people and been retweeted over 1,000 times.

And CNN apparently got the message…

See how you can make a difference!

I don't necessarily endorse all content from this site but it's always good to get different perspectives. https://honestreporting.com/ibn-20212411-hezbollah-iran-drones-benny-gantz-morocco-normalization/